Apple pie and cheesecake come together in these flavorful bars that feature a gingersnap walnut crust, and are topped with buttery streusel, and caramel sauce! 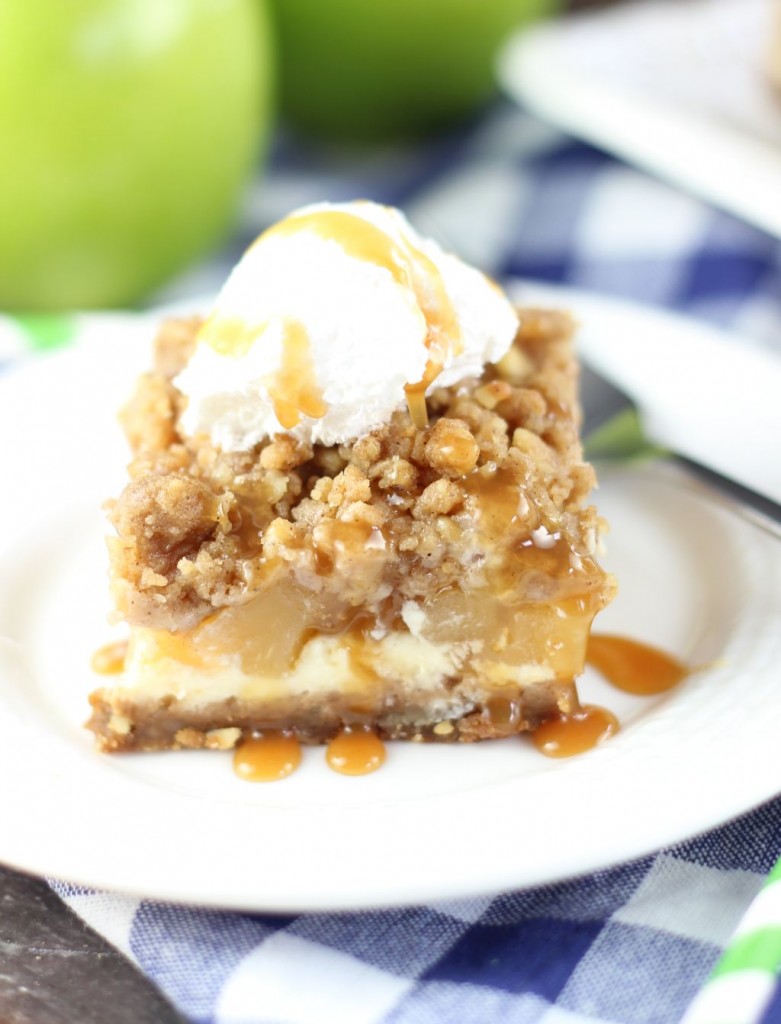 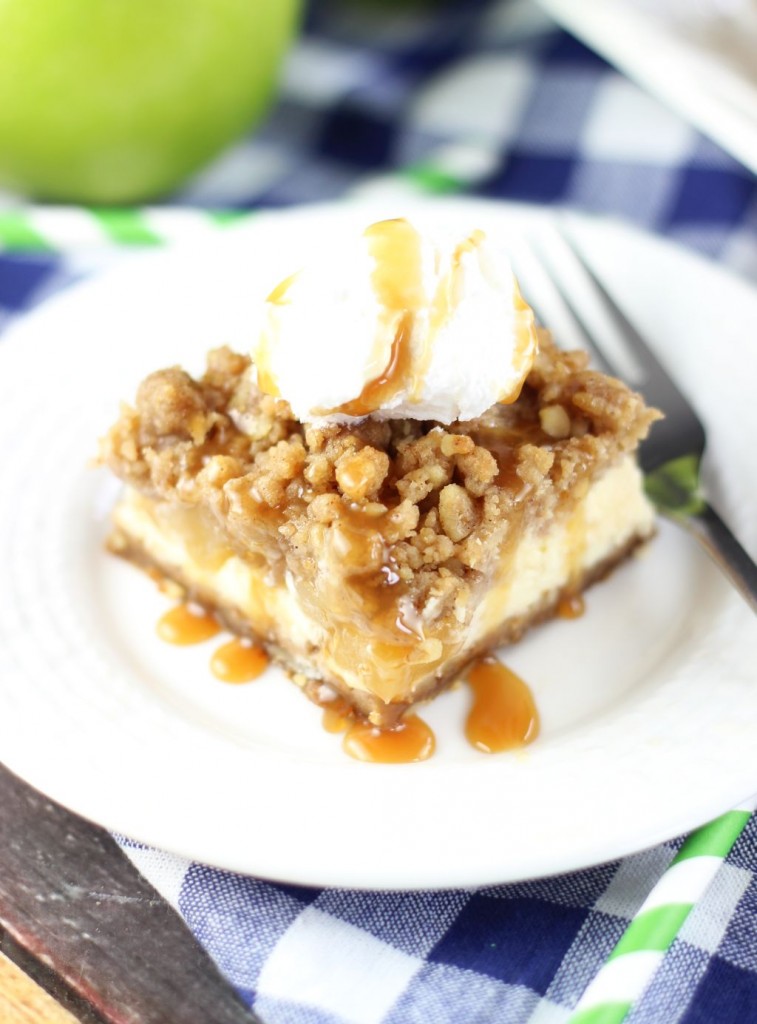 You can’t always make every single component of a recipe from scratch, or you are slaving away in the kitchen all day. So you have to pick and choose where it’s going to matter sometimes. We’re puttin’ in the work on these bars in other ways (crust, cheesecake), so it’s okay to cut the corners on the filling. You just have to decide what is going to be the showstopper of the recipe, and that’s what you go ‘all in’ on and where you don’t cut corners. Know what I mean? 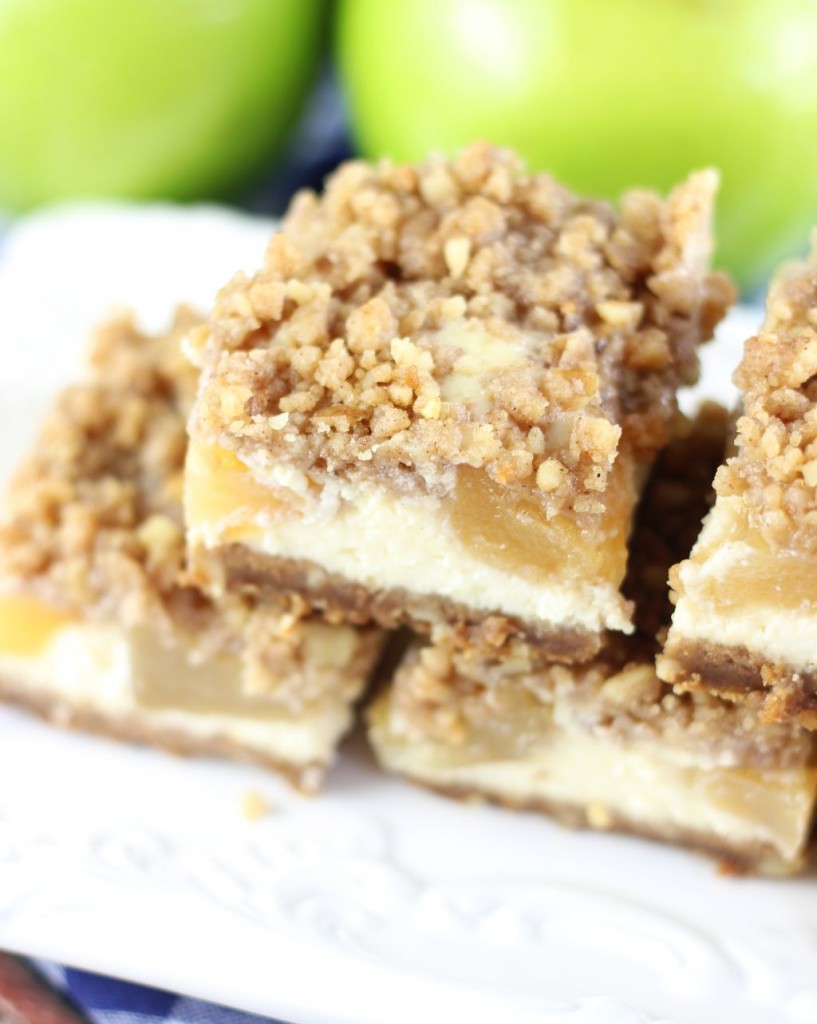 Btw, I have made a personal decision that every pie I ever make will have prepared pie crust as my shortcut, and the filling from scratch (of course). I just hate making from-scratch pie crusts that much. I might break that rule over the holidays, but for now, I’m digging the ease of a pie crust that simply unrolls. 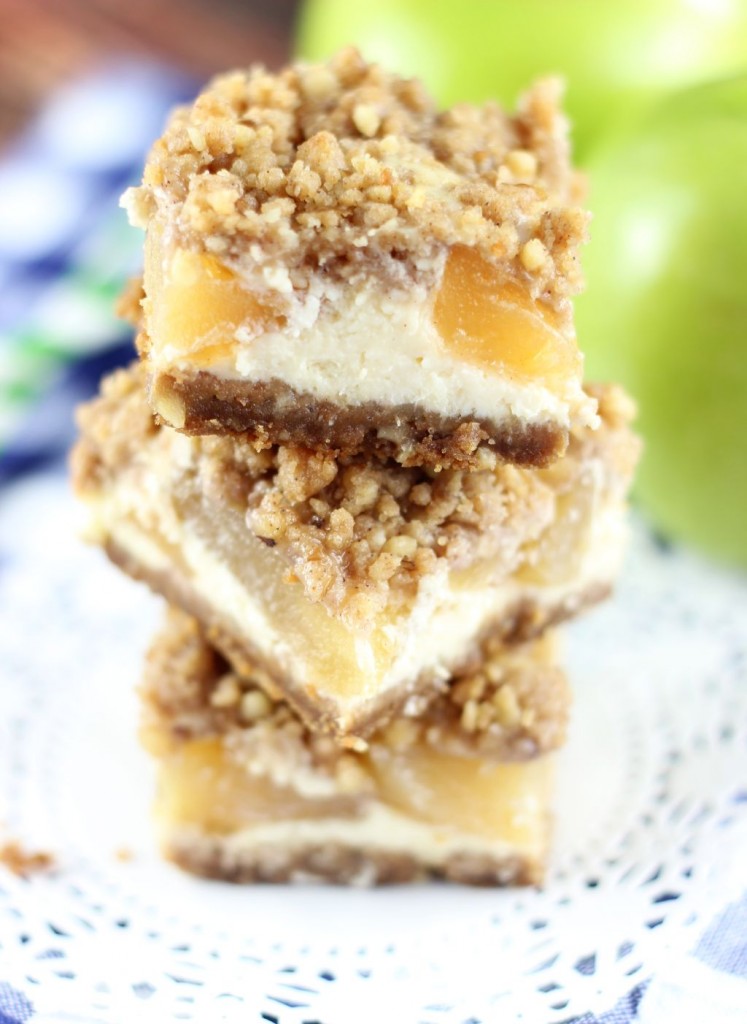 It’s been a pretty long time since I have used prepared apple pie filling, but I ate it straight from the can and deemed it completely delicious…. surprisingly. If you’d still like to make the filling from scratch, you can and should, and might I suggest this filling here? It is the best apple pie filling you’ll ever find, guaranteed. 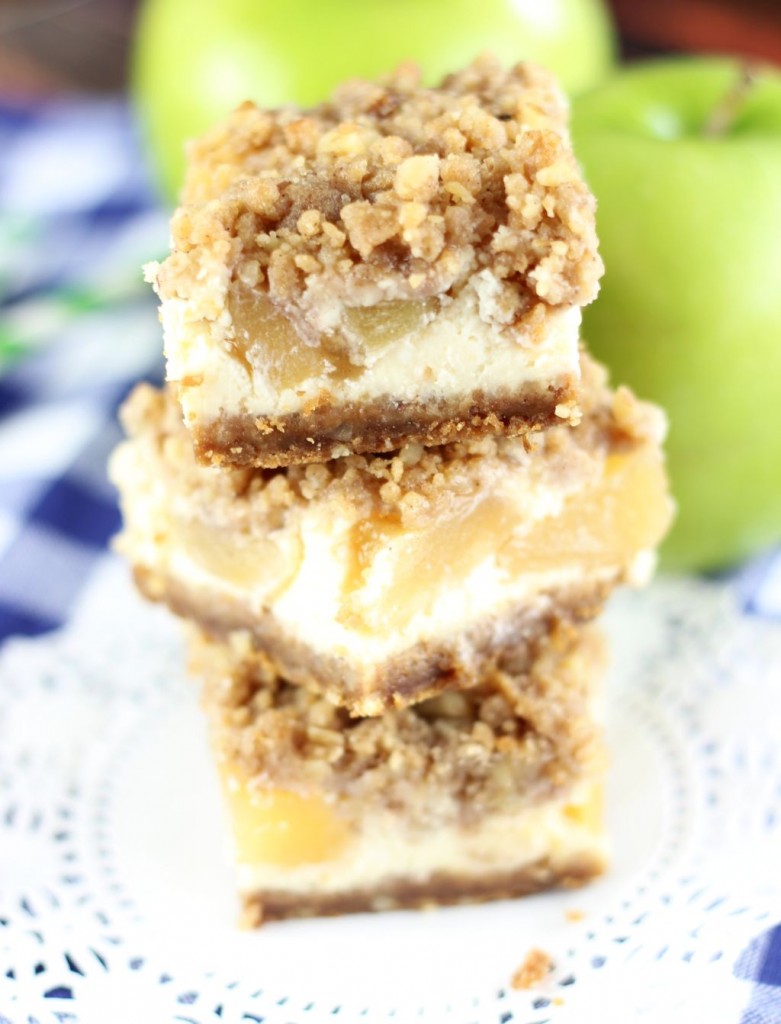 Where we go the extra mile on these bar is with the crust, cheesecake, and streusel. It’s not like they are tons of work, but it’s enough nitty gritty to make it worth snagging a can of apple pie filling and making that the easy part. The crust is composed of crushed gingersnaps and finely chopped walnuts, giving the bars lots of spice and molasses flavor, as well as nuttiness, of course. With a layer of creamy cheesecake, a layer of apple pie, and a brown sugar, cinnamon, and walnut streusel to top them off, these bars become a quintessential fall dessert. If all of that is not enough, drizzle them with caramel sauce for a truly over-the-top flavor effect. 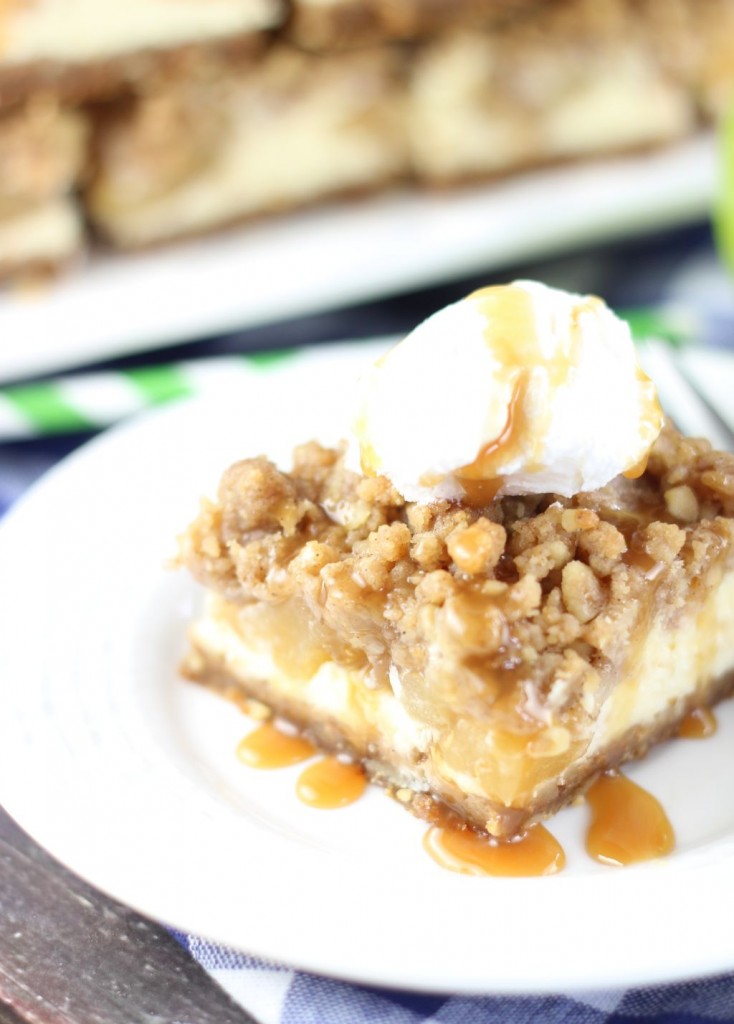 These bars represent pretty much every favorite fall flavor you can think of. Except maybe pumpkin, but that might’ve been overkill. These jam-packed Caramel Apple Cheesecake Streusel Bars (…. with Gingersnap Walnut Crust) epitomize fall in a dessert! 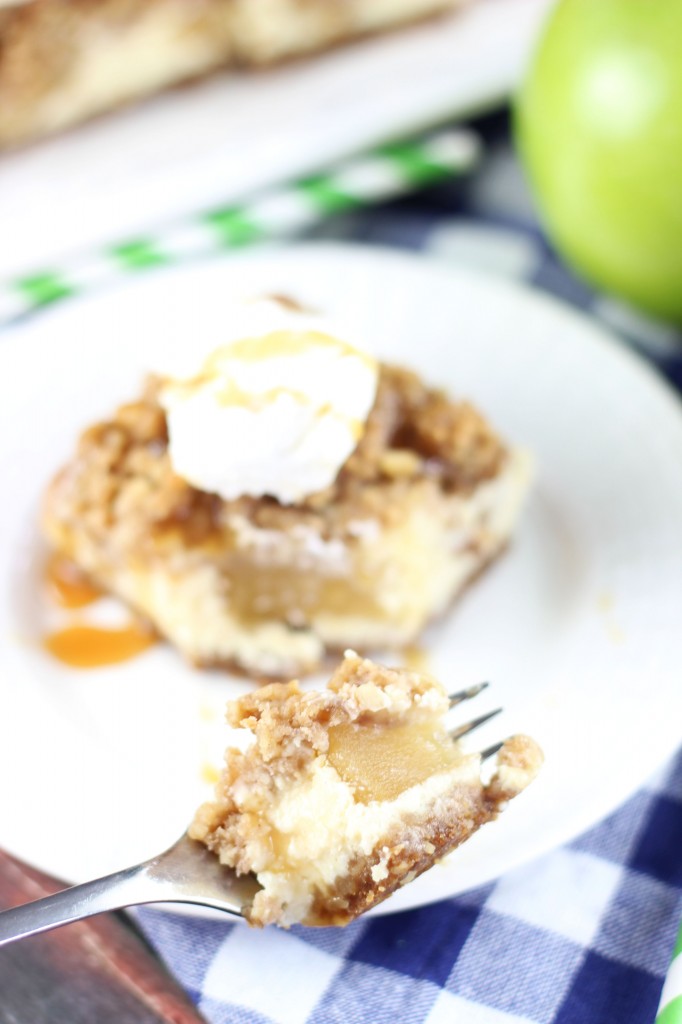 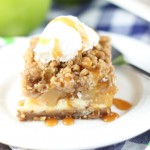 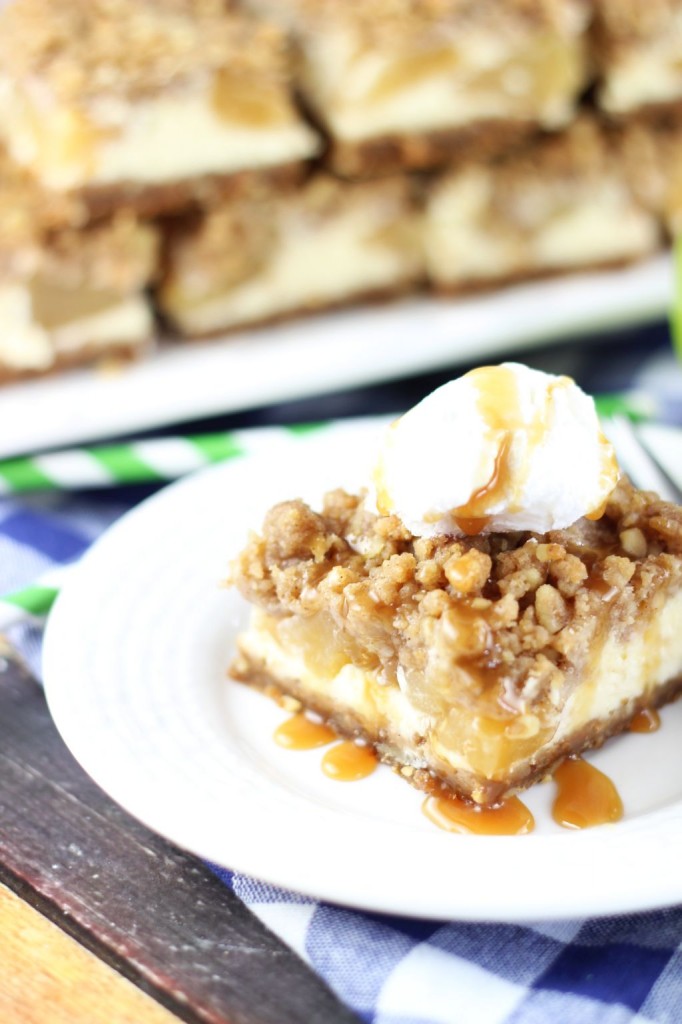