Layers of green velvet cake, sandwiched by a whole cheesecake, and topped with cream cheese frosting and Lucky Charms marshmallows. 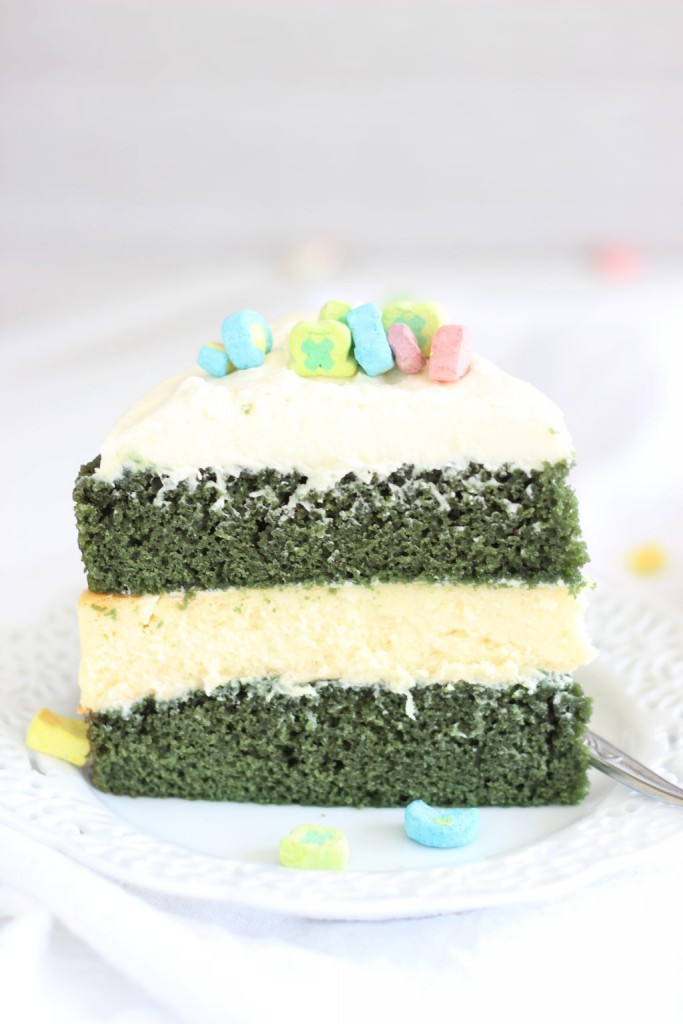 I don’t even know where to begin. 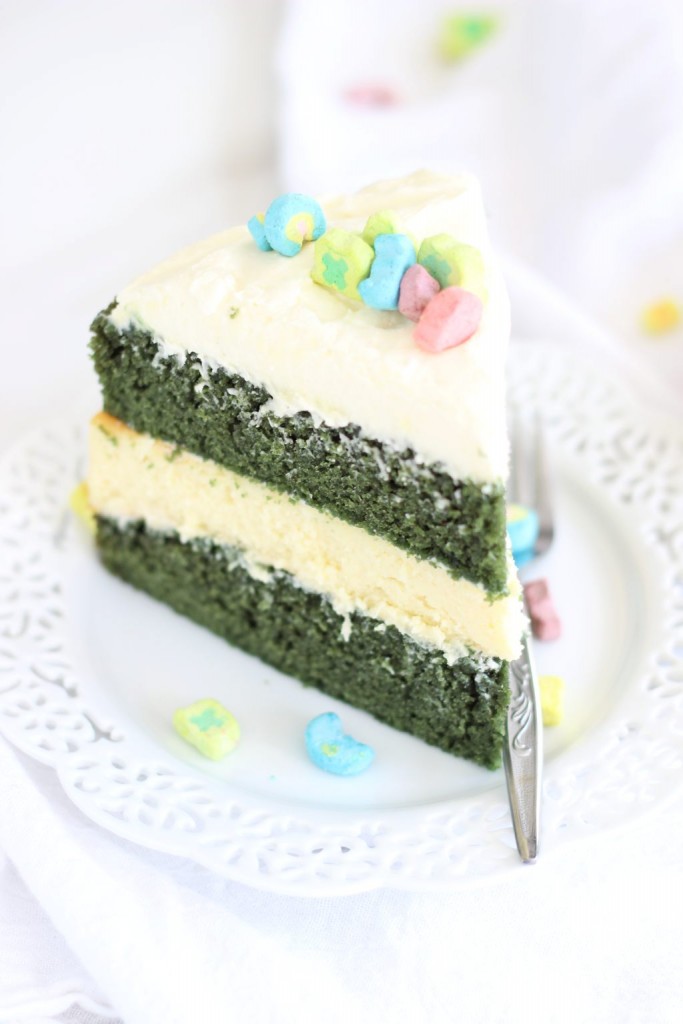 I have hardly loved a cake more than this Green Velvet Cheesecake Cake. 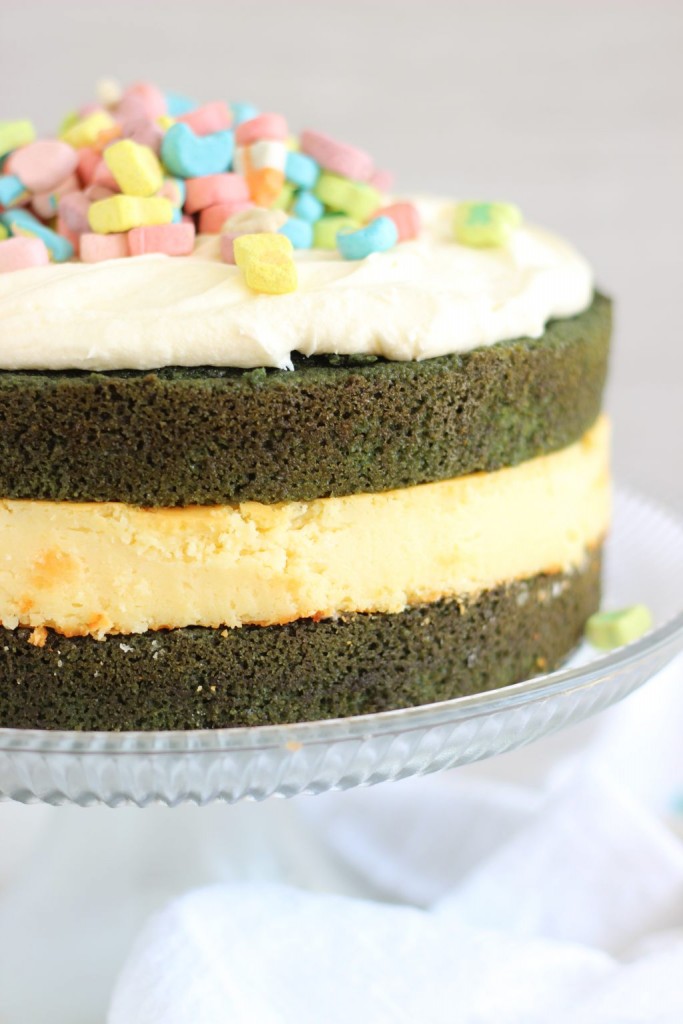 The cake is to-die-for. I would eat it by itself, even without frosting. I don’t know why someone would eat it that way, but I’m just saying you could, and it would still be totally delicious. This green velvet cake recipe is probably the only cake in the world that would be acceptable without frosting. 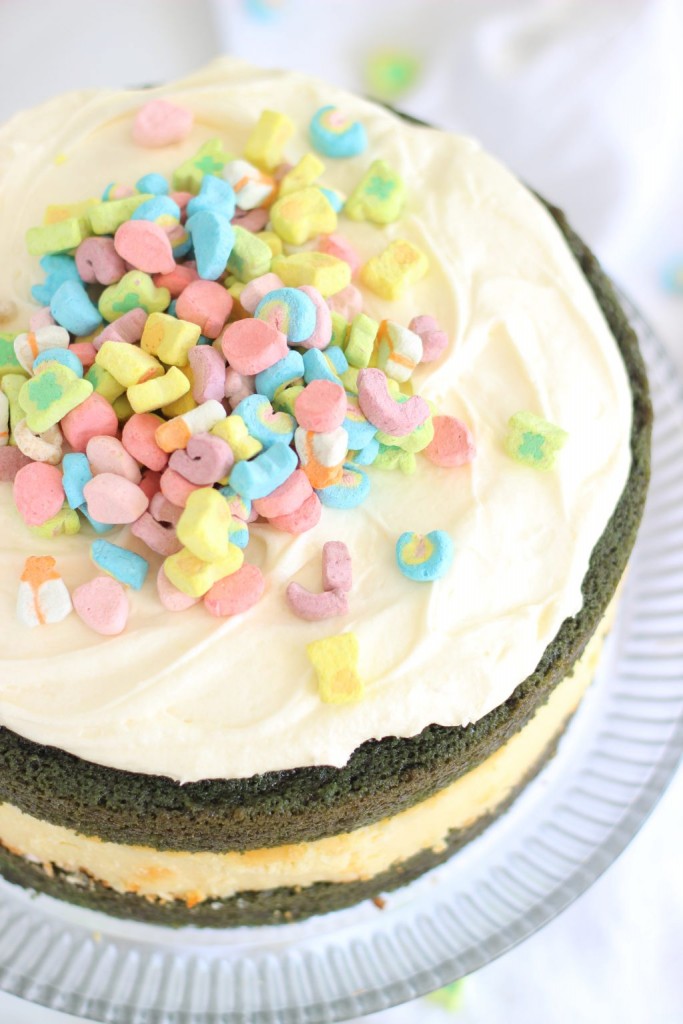 I don’t need a lot of frosting anyway, but I do think it’s essential with cake generally. Without it, why bother? My family – they all fight over the corner pieces of cake, and they clamor for more frosting. I like a solid amount, but I don’t want heaps. This has a generous mound on top, and that’s that. It’s just the right amount. 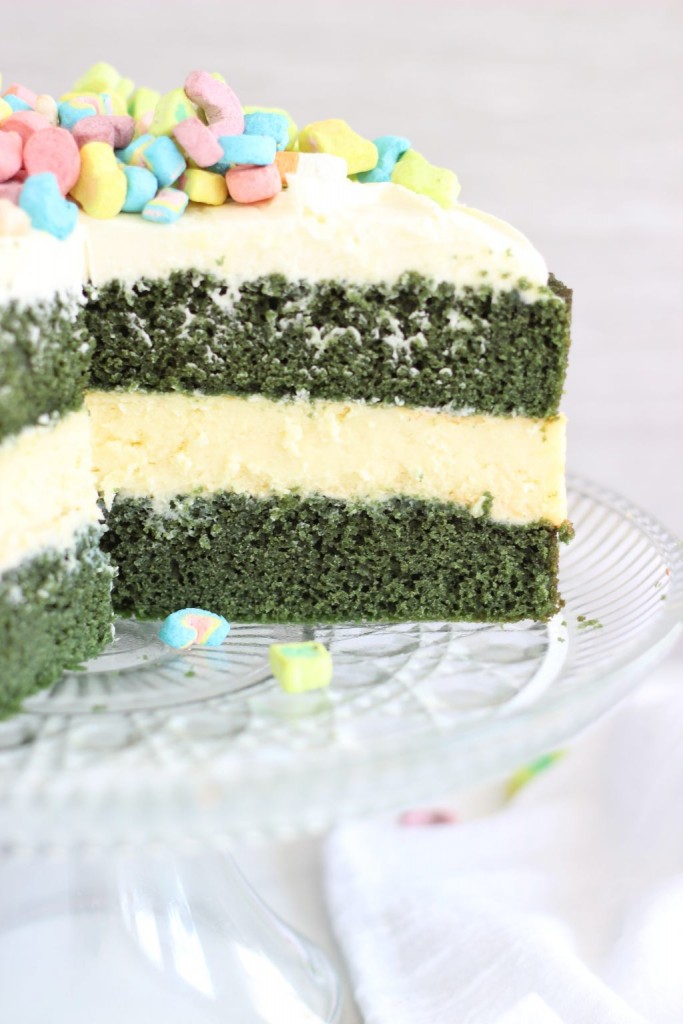 Especially because there’s a cheesecake in the center of this cake. A full, whole, entire cheesecake fills this layer cake. Sounds excessive? It’s not. It’s grand.

Cheesecake is a long-standing favorite dessert in my house. I have categories of cheesecake recipes. I have everyday cheesecakes, special occasion cheesecakes, no-bakes, and everything in-between. 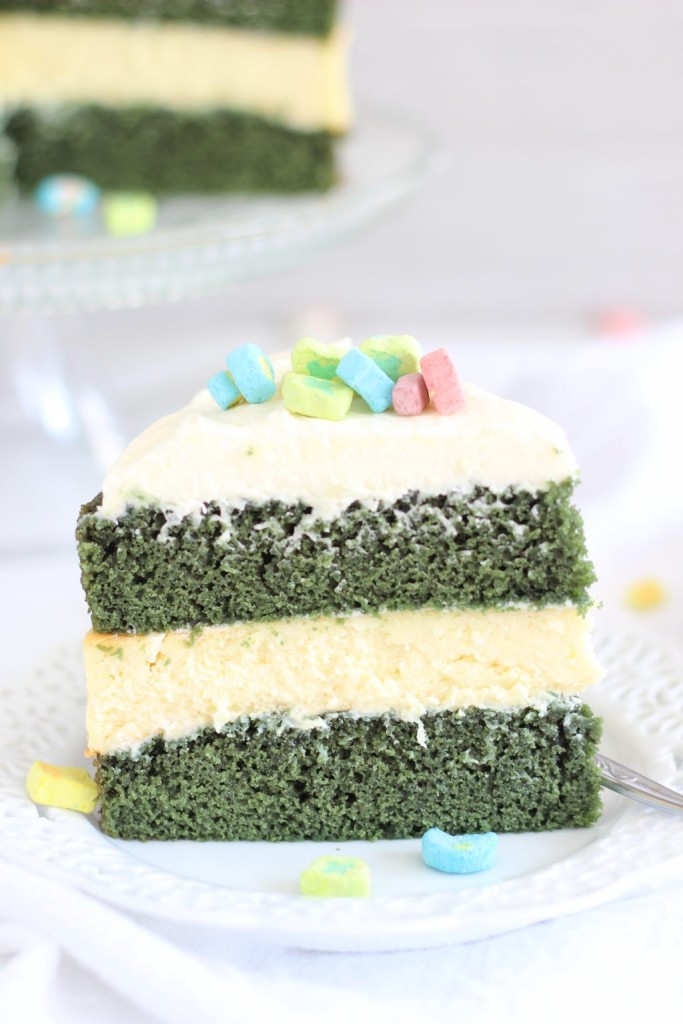 Except maybe savory. I’m really not about that life. Cheesecake should always be sweet! The cheesecake in the center of this cake is my absolute favorite, top-notch, can’t-be-improved-upon cheesecake recipe. 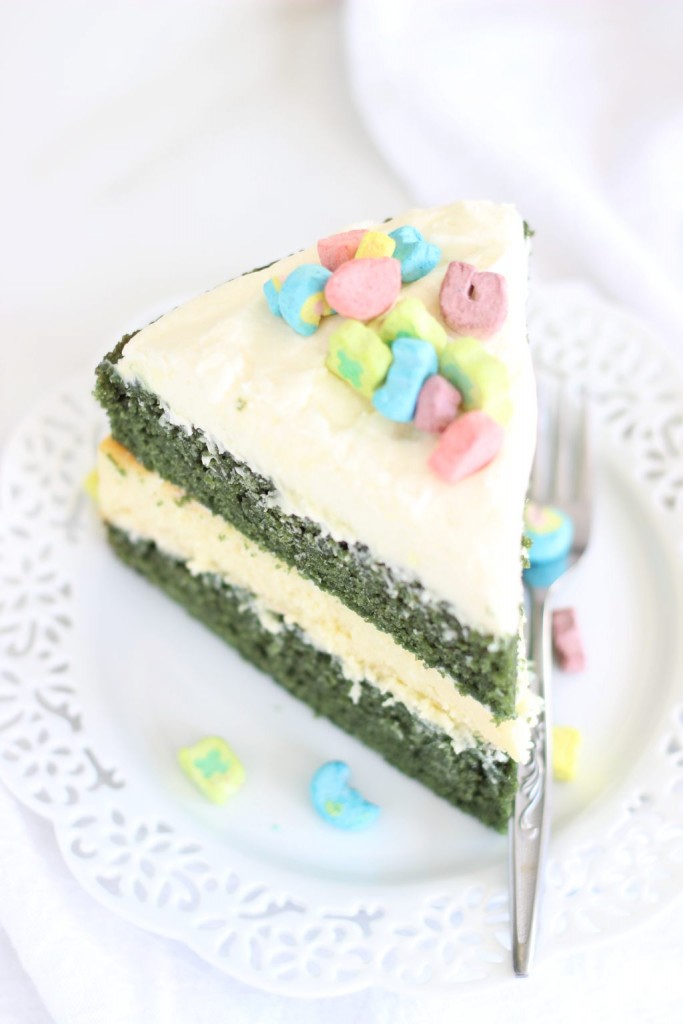 Altogether, this Green Velvet Cheesecake Cake is the best of everything. Lots of rich cream cheese frosting, a creamy cheesecake in the center, and the most moist and wonderful green velvet cake.

If that’s not enough for you though, I piled it high with Lucky Charms marshmallows, just for fun! 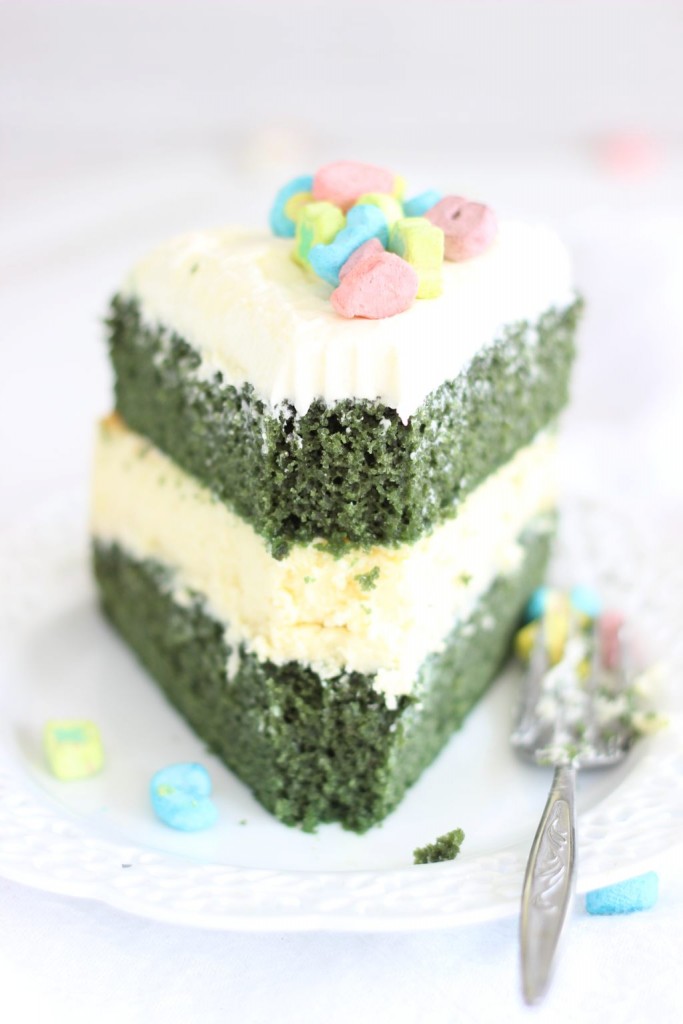 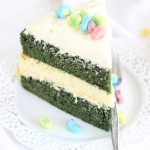 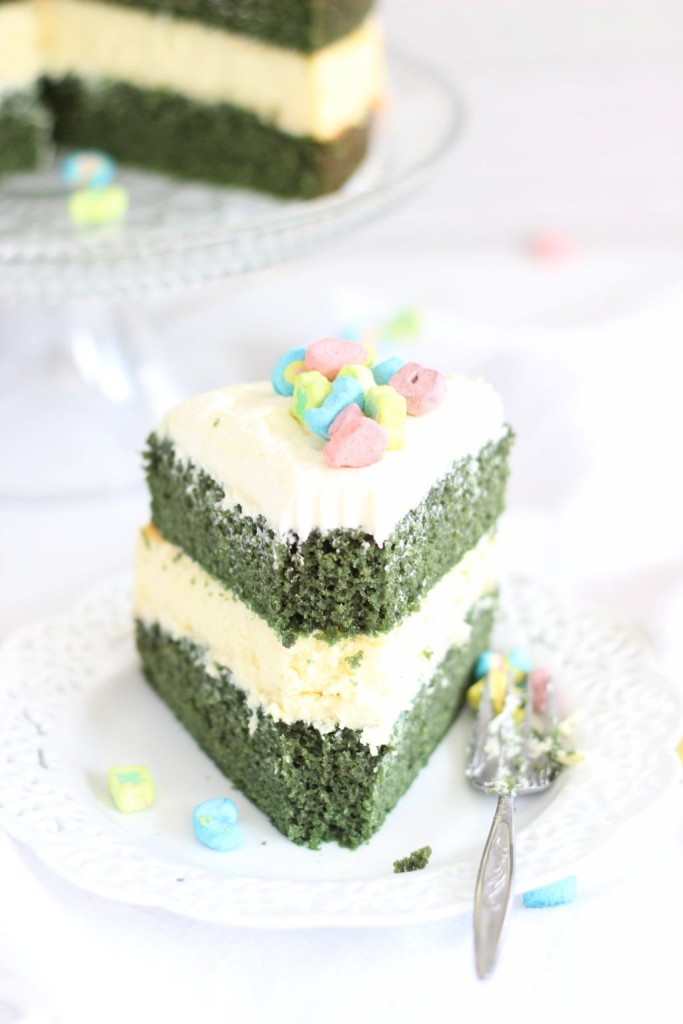