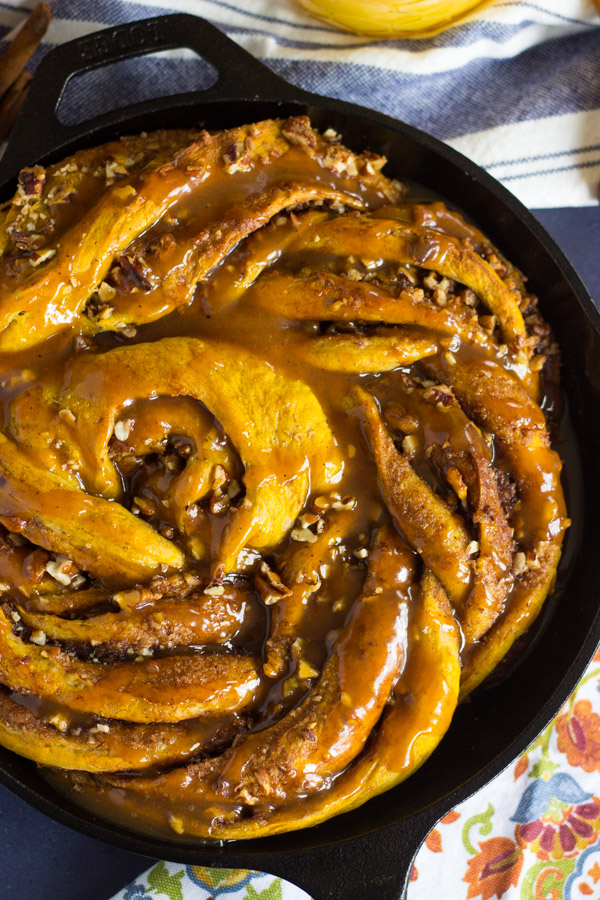 It is addictive. So much, in fact, that I made it, remade it, then decided to shoot video of it, so I made it twice more. Four times in about 2 weeks. There’s a half-eaten one in the kitchen as I write, and another whole one in the freezer. I’m so happy that it’s in there so I don’t have to worry about running out of it soon. 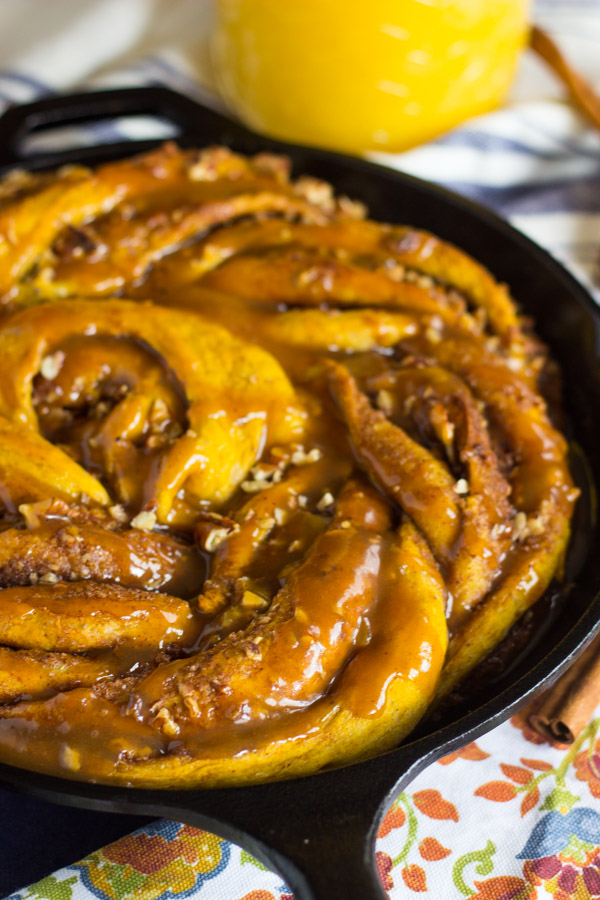 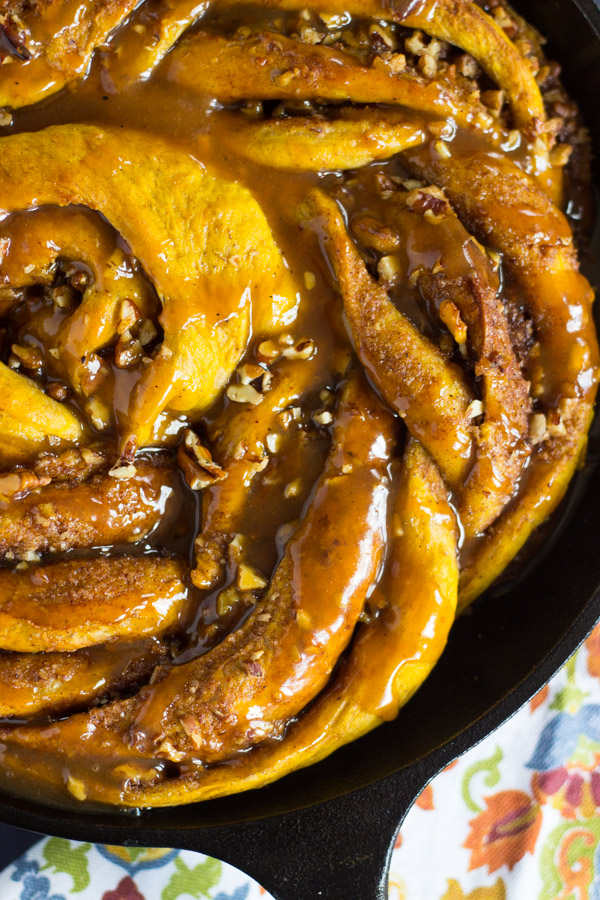 The cinnamon roll part is perfect. It’s chewy, fluffy, and pillowy soft. It’s especially soft and chewy in the center where it nearly melts in your mouth. There’s pumpkin right in the dough, and it’s heavily spiced with pumpkin pie spice too. 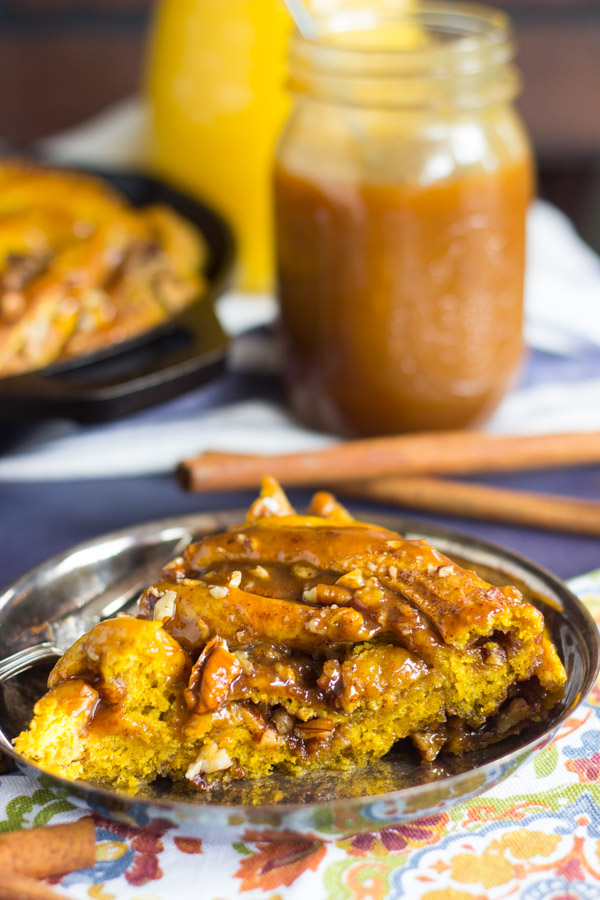 Because of the way the dough is cut and twisted, the butter, cinnamon, brown sugar, and pecans get intertwined in every bite. The butter soaks into every crack and crevice. The filling is ooey-gooey in the center where it’s baked into the layers of dough, but it’s caramelized and crispy on top. 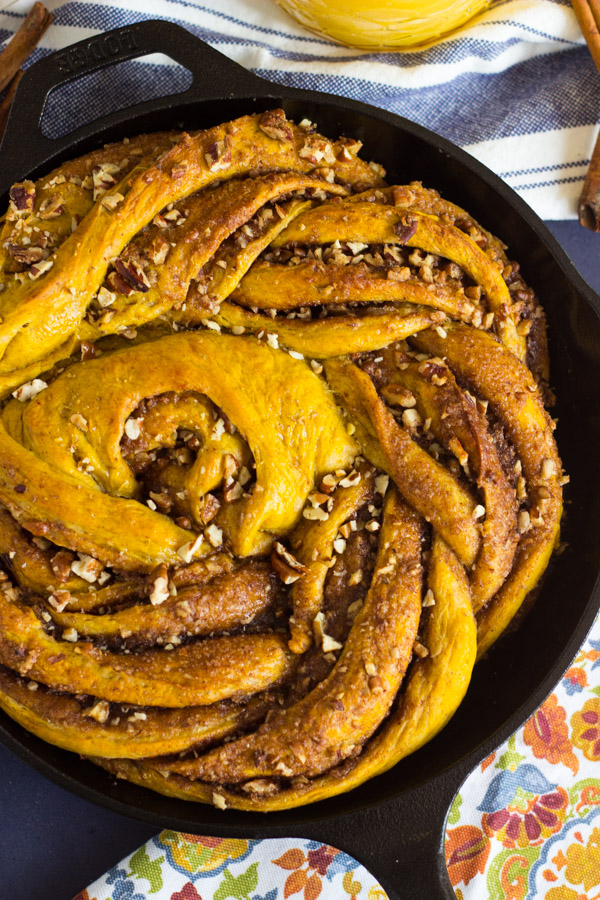 I smothered this cinnamon roll in Fireball Whiskey Caramel Sauce. I made that recipe again recently (because I want it on EVERYTHING I eat) and had an entire jar, so I poured a whole bunch on this Giant Pumpkin Caramel Pecan Skillet Cinnamon Roll, and it was pure heaven. The cinnamon whiskey enhanced all the cinnamon and pumpkin pie spice in this.

I drizzled the caramel sauce over the roll while it was still warm from the oven so that it melted and seeped into all the crevices. 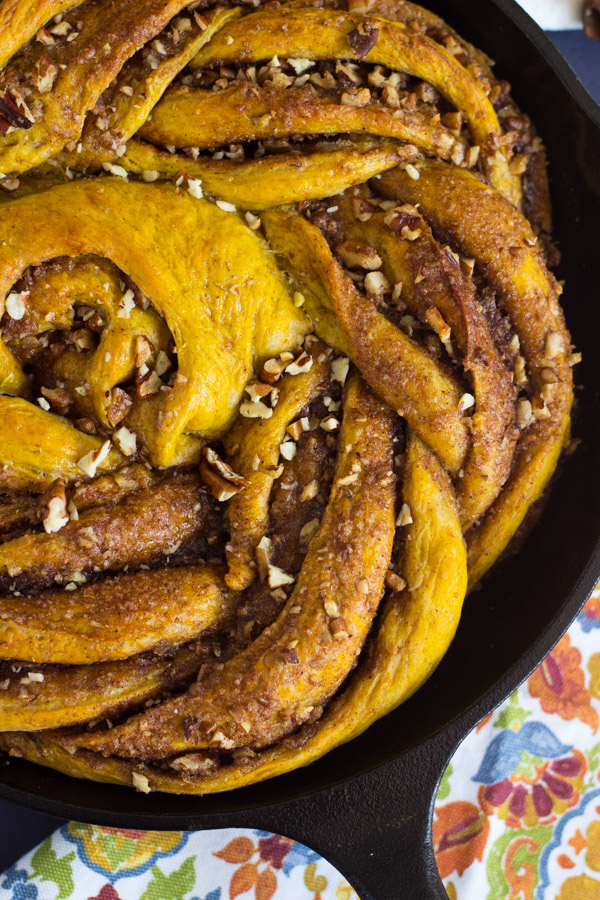 This is crazy easy to make, and I would not lie to you. The dough is just a few ingredients, and it comes together without any elbow grease if you have a dough hook for your mixer – no kneading. And the twist is not at all complicated or difficult. It looks like it might be, but it’s totally not. 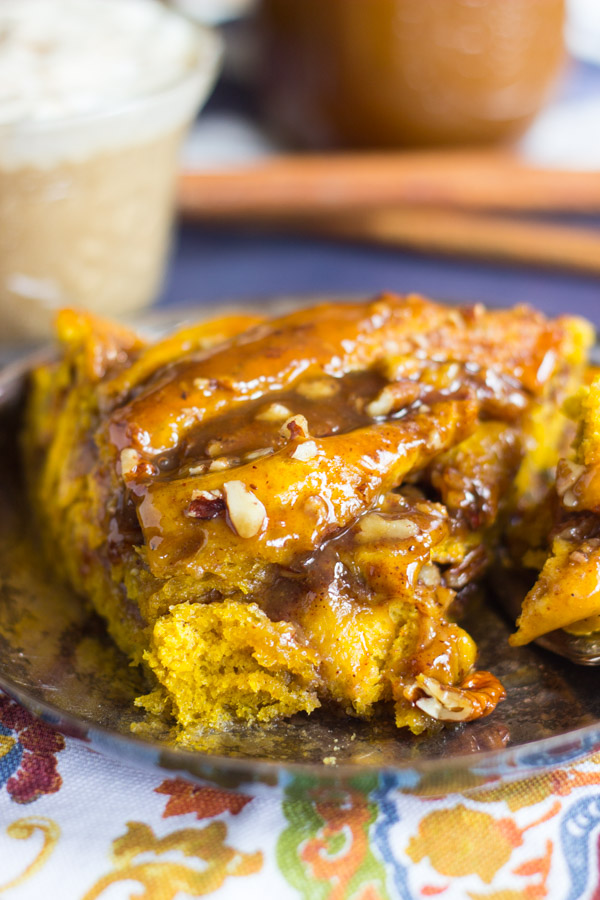 This Giant Pumpkin Caramel Pecan Skillet Cinnamon Roll makes for such an impressive brunch. Or dessert. Or afternoon snack. Or post-workout carbohydrate refueling, not that I know anything about that. It’s a great recipe for holidays because it’s not a ton of work, but it makes a statement.

Of all the things I made for fall this year, this might be my very favorite! 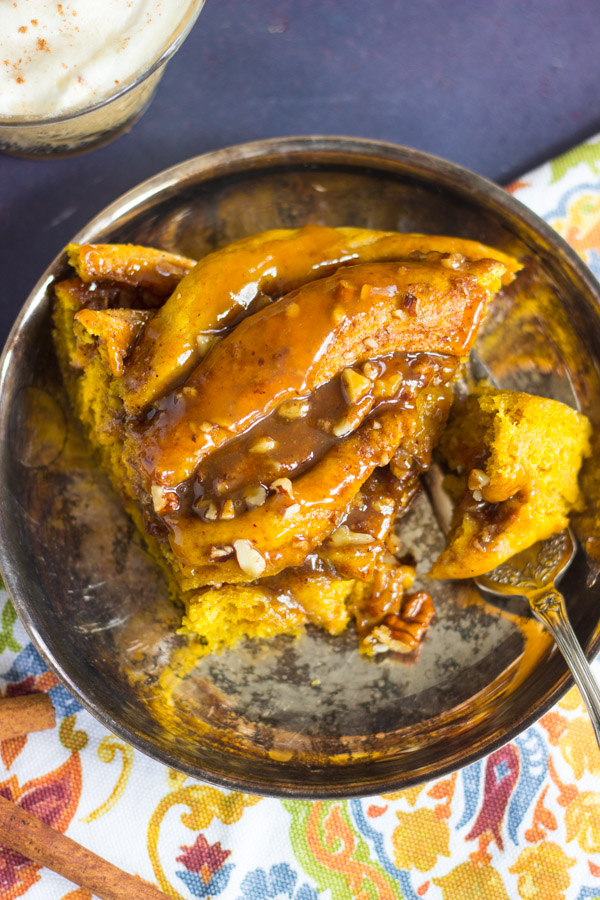 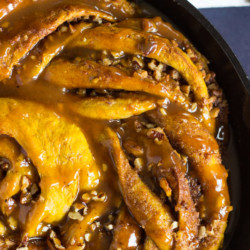 I didn’t include step-by-step photos of cutting and twisting the dough, but it’s seriously easy to do. I got it right on the first try, and I’ve done it successfully ever since. I have a video of this recipe coming soon though. I just first have to figure out how to edit the footage. No idea what I’m doing, but it should be within a week or two. If you have any questions about twisting the dough, just holler and I’ll walk you through it til the video is ready! 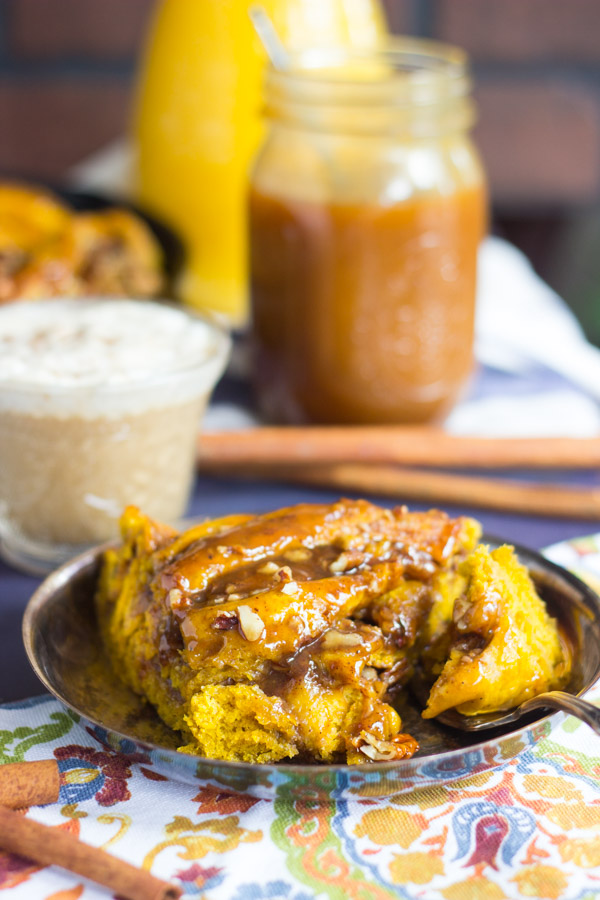 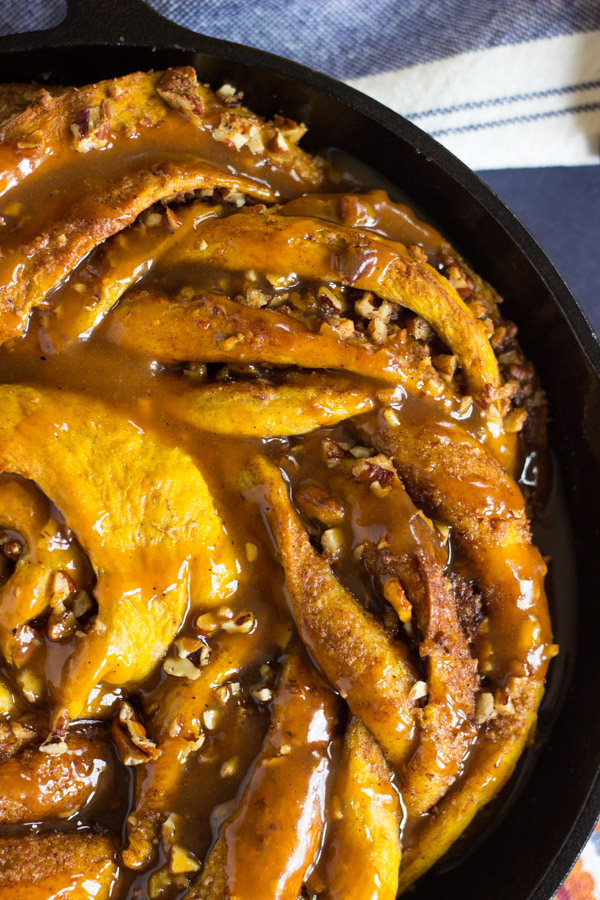 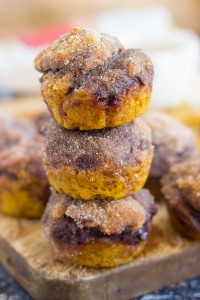 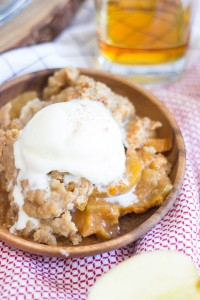 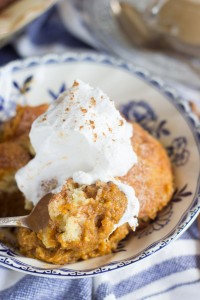 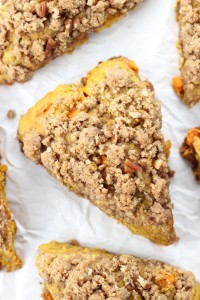 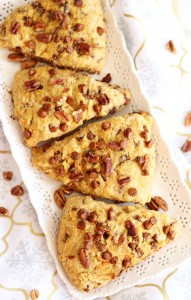