With a stunning cinnamon-swirled pie crust on the bottom, and coils of cinnamon-sugar-rippled pie crust on top, this Cinnamon Roll Crust Pumpkin Pie is an unconventional way to elevate classic pumpkin pie this holiday season! It’s very unique, and doesn’t scrimp on tastiness either. 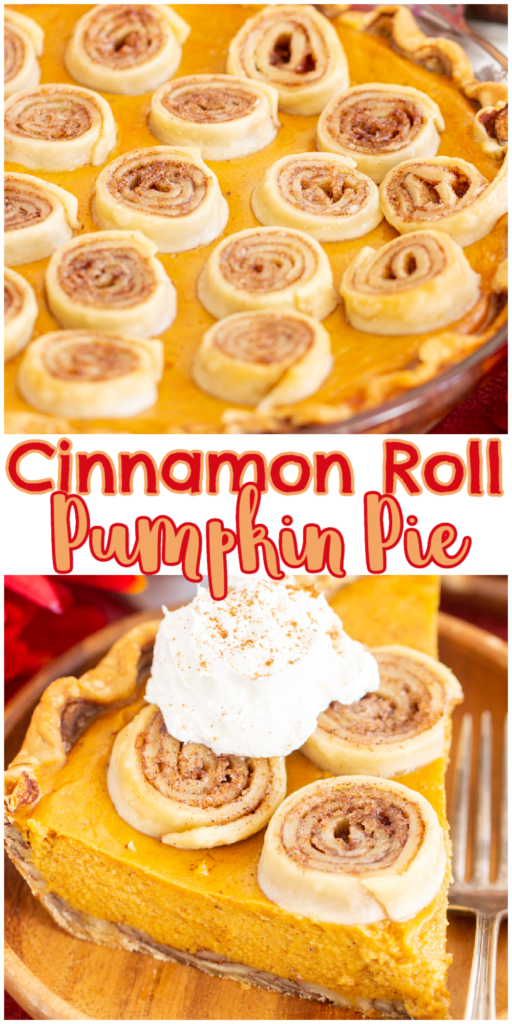 Here’s what I’ll say about this Cinnamon Roll Crust Pumpkin Pie: it turned out differently than I thought, and I almost didn’t share it on the blog, but my S.O. insisted that I do. He raved about it, and said it was one of the best pumpkin pies he’s ever had. So I agreed to present it to you. 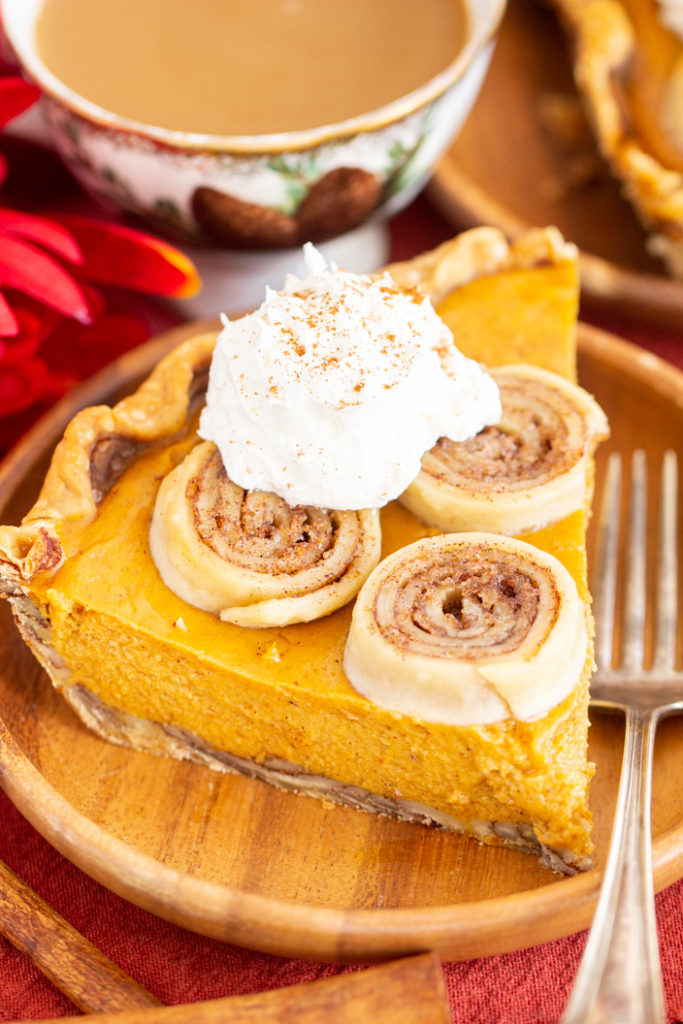 However, I was not completely elated with how it turned out! But that has nothing to do with its deliciousness, and more to do with its appearance. I really thought it would be prettier and more beautiful.

It’s still pretty, but I thought it would be jaw-dropping and show-stopping, and it doesn’t quite rise to that level. 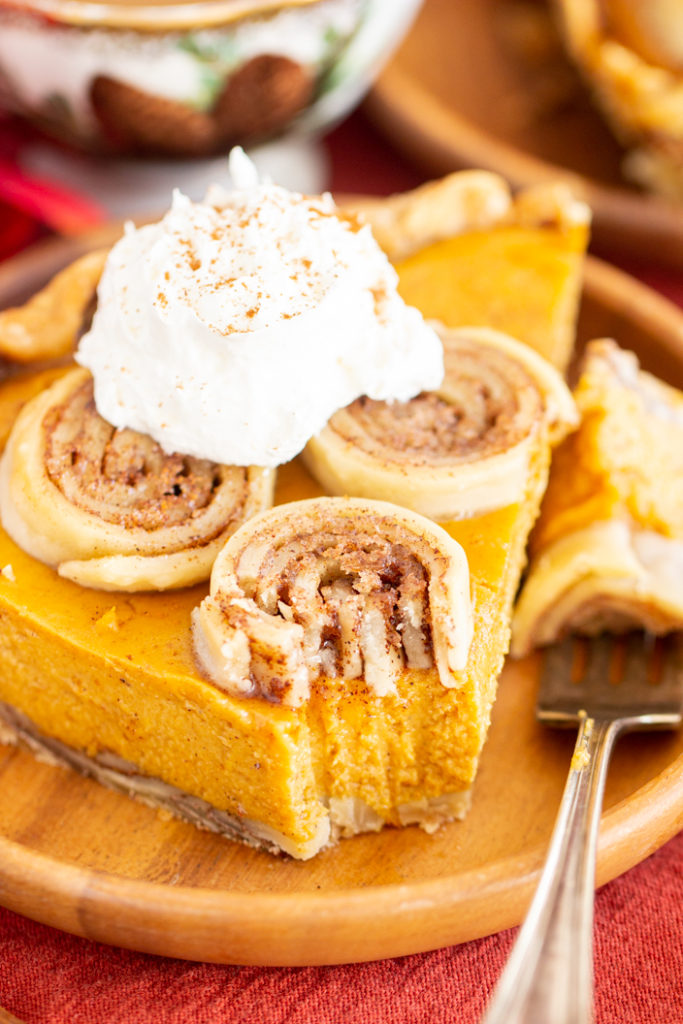 Something else to note is that the steps to making this are a little wonky and awkward. This Cinnamon Roll Crust Pumpkin Pie is not hard to make, but it is kinda high-maintenance. That’s probably the best way to say it. A few steps need to happen at particular times as it is baking, and so it is more high-maintenance than regular pumpkin pie. 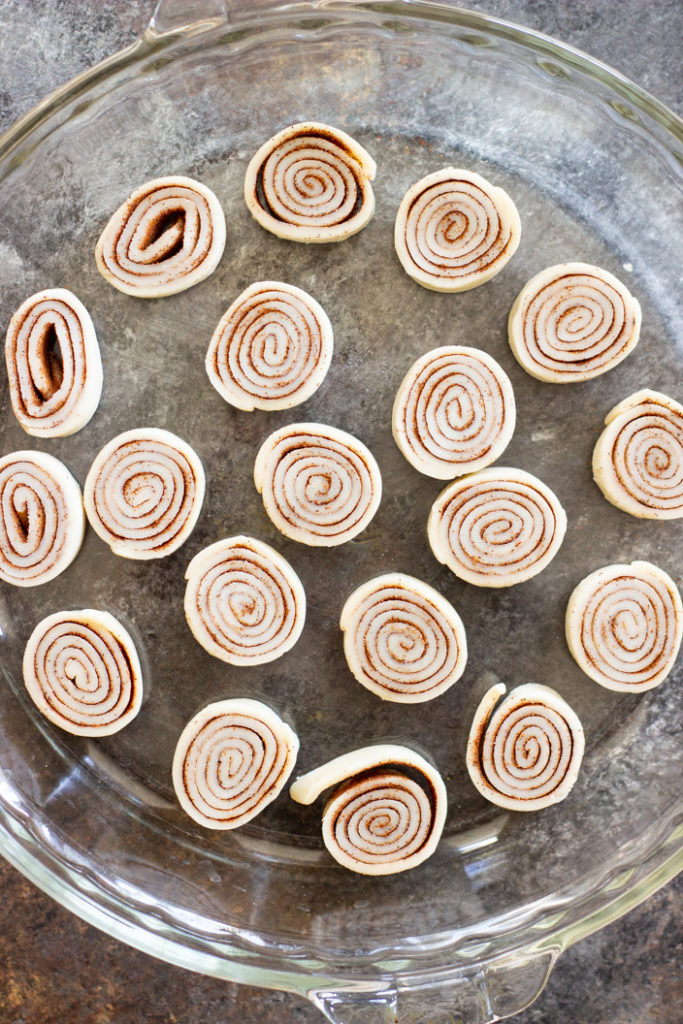 For example, pumpkin pie filling is very liquidy until it’s about 30+ minutes into baking, so the pie crust spirals cannot be placed on top of the pie until it’s fairly set or they’ll sink.

This is a one-shot step too. You can’t set the spirals in, and decide you want to rearrange them. Where you set them is where they stay. Sooo not a big deal, but something to know about in advance so that you can map out your spiral placement. 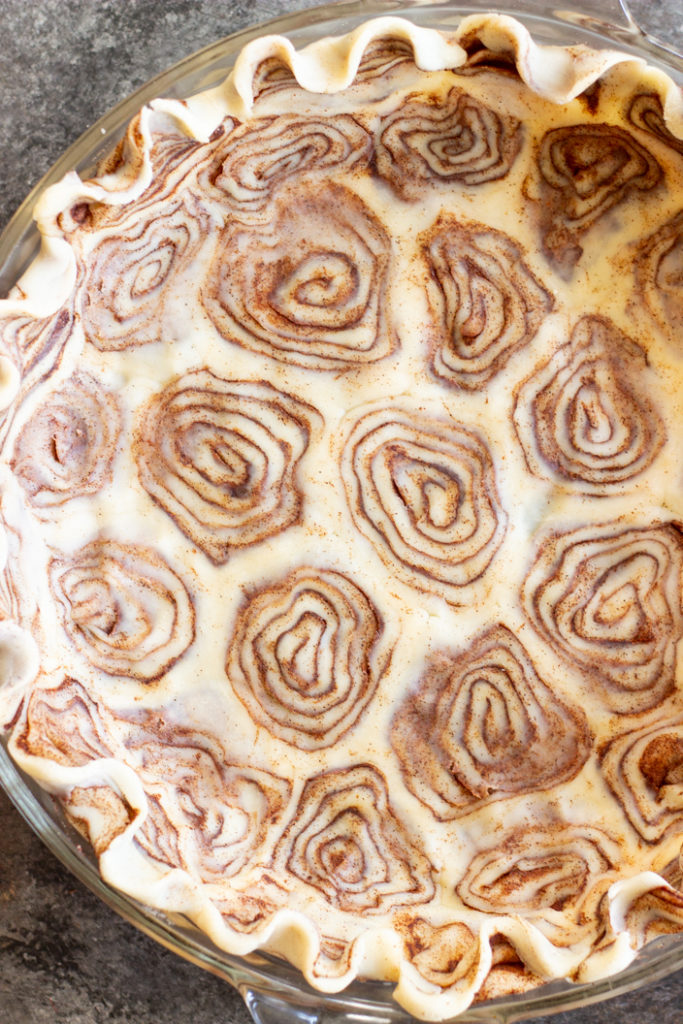 Since the coils don’t make it onto the pie until late into baking, they do not have the same opportunity to brown as the bottom pie crust. As a pretty Type A person, it bothers me that the top pie crust spirals aren’t as golden brown as the crust.

I would want those to be more even and matched up… that’s just how my brain works. A few minutes of broiling the pie at the very end of baking helps us solve that quandary, fortunately. 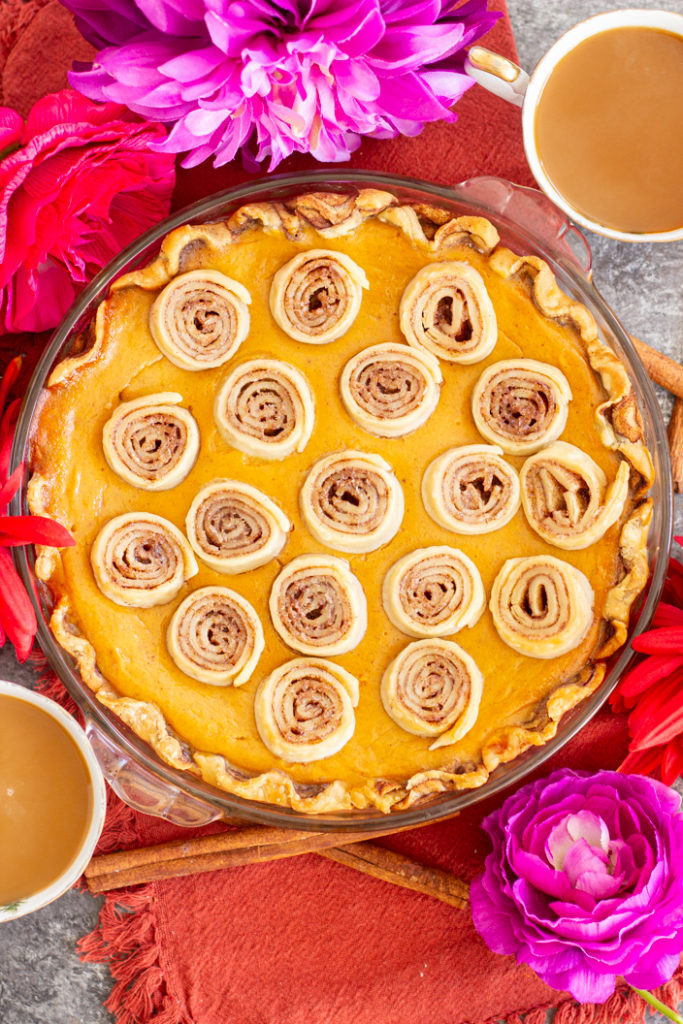 Lastly, the bottom crust and the spirals of crust on top are not made exactly the same. The bottom crust is swirled with butter and cinnamon only, no sugar. Adding sugar into that bottom crust would not fare well, melting and sticking, and gooing up the whole thing. That would make a total mess.

Whereas the coils of crust on top are butter, cinnamon, and sugar, all three. This is a minor difference between prep of the two crusts, but one to be aware of going into it. 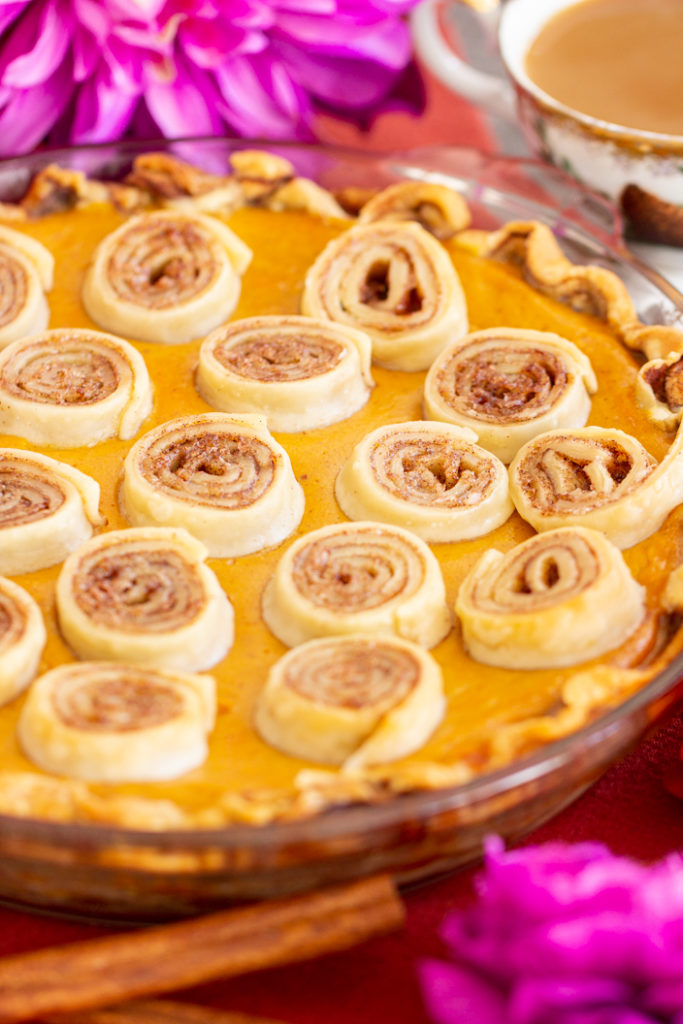 In summary, this Cinnamon Roll Crust Pumpkin Pie isn’t hard, but it’s… “particular.” The end result is worth the special steps because the extra tinges of cinnamon and sugar give this pie quite an edge over regular pumpkin pie.

As does the extra pie crust in the form of spirals. “Yes, please” to more pastry in our pumpkin pie, especially if it’s brushed with butter and cinnamon-sugar! 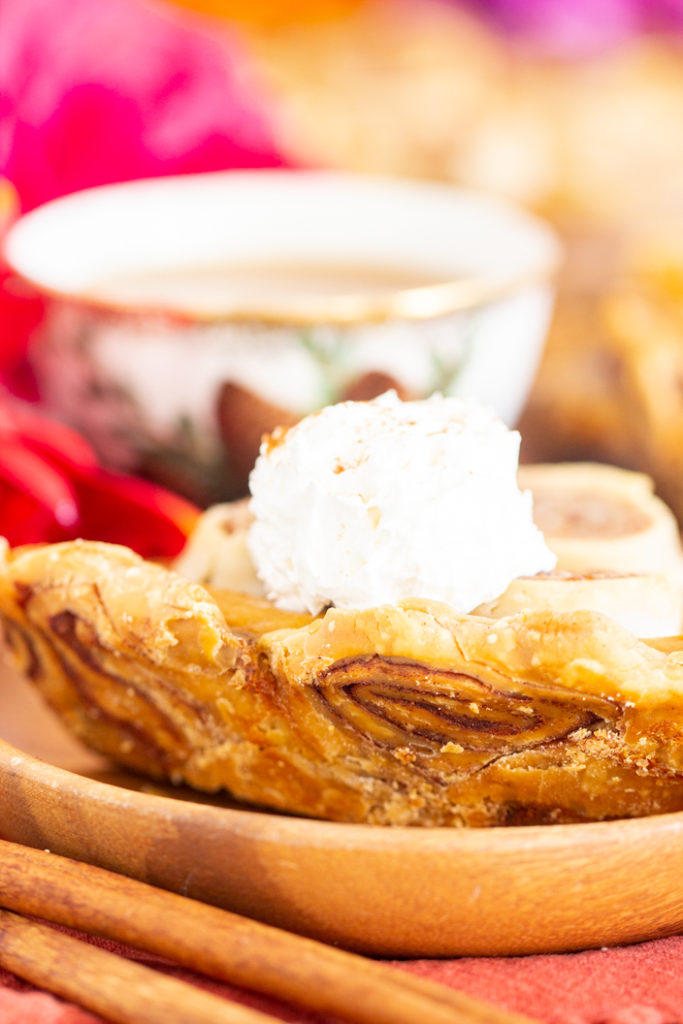 And that’s that. This Cinnamon Roll Crust Pumpkin Pie earned a spot on the blog, and it certainly gives traditional pumpkin pie a run for its money. If you want to amp up classic pie this holiday season, give this one a go, and let me know what you think!

Should you find yourself with any leftover pie crust scraps, must make these Pie Crust Cookies! 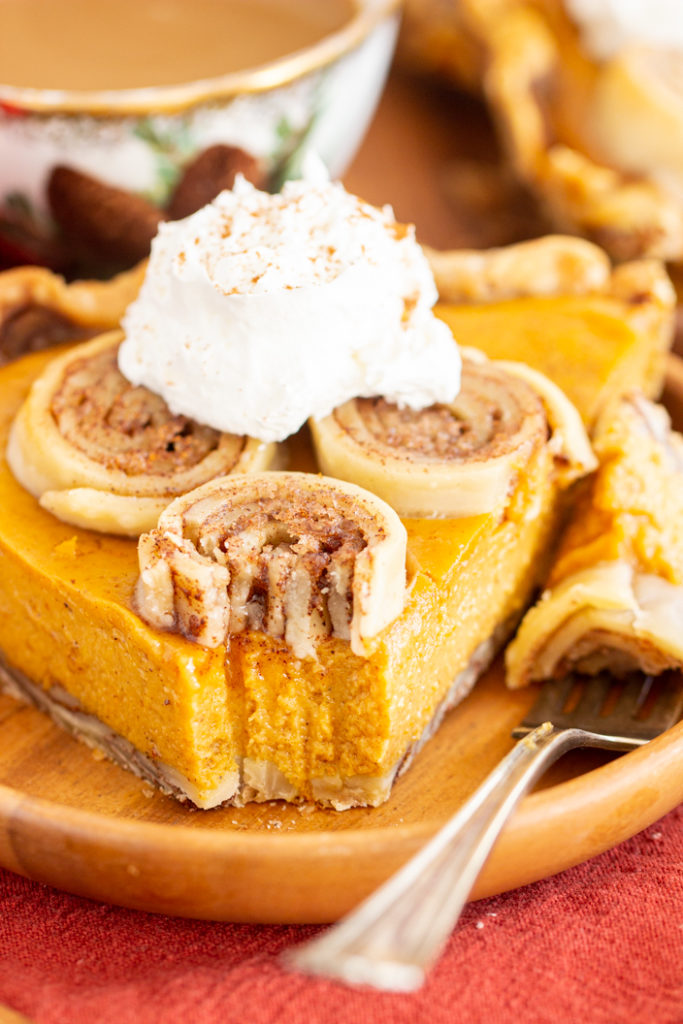 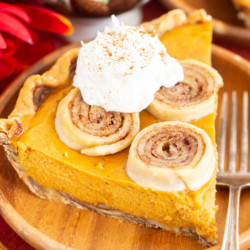 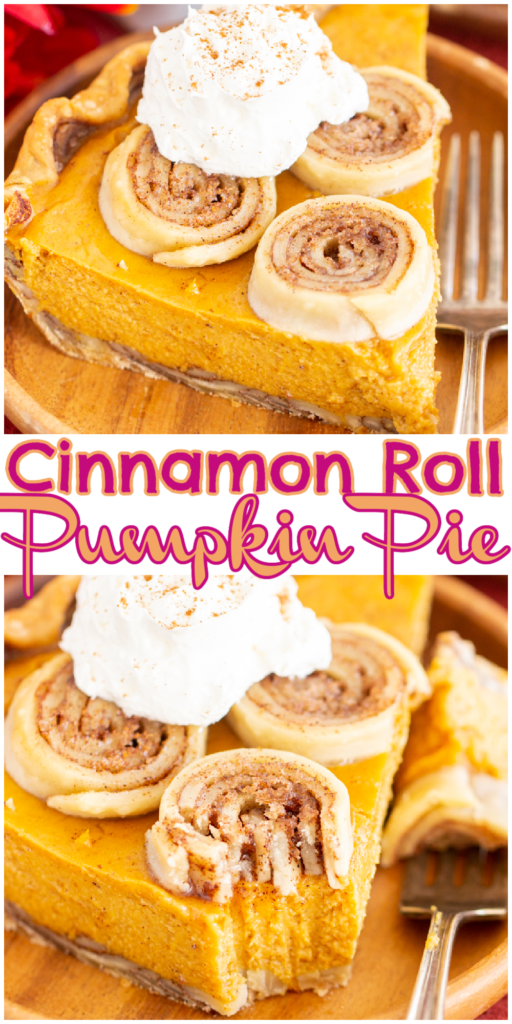 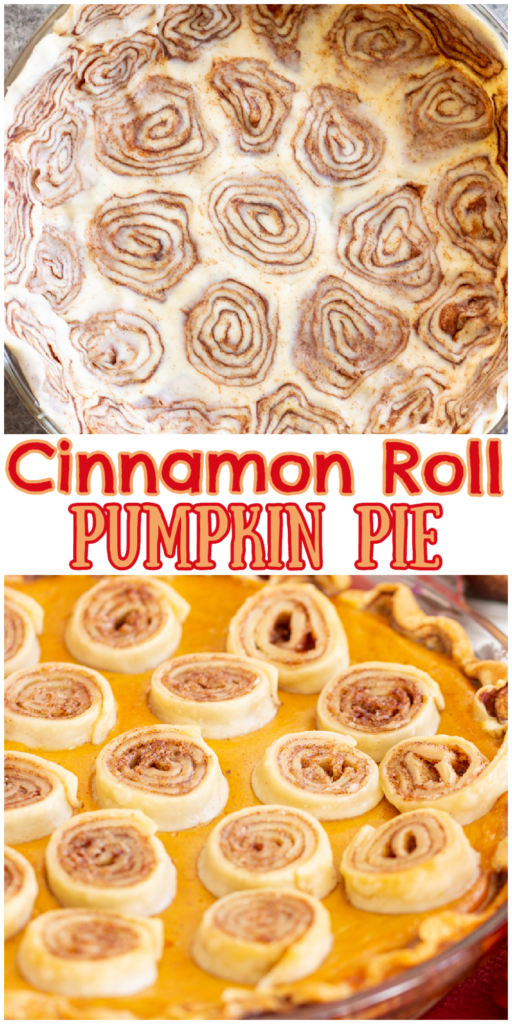