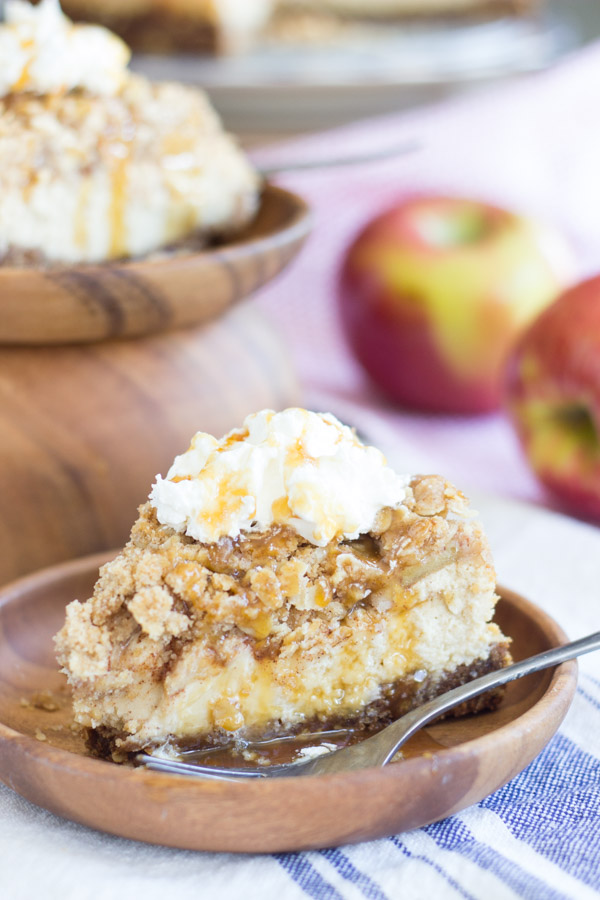 The others are awesome too though. This White Chocolate Pumpkin Cheesecake with Gingersnap Crust that I posted last week is great because I always love any form of pumpkin cheesecake, but I think I’m just currently most proud of this Caramel Apple Crisp Cheesecake, and that’s why I’m partial to it. The Maple Nut Cheesecake with Walnut Crust and Honey Pecan Cheesecake with Pecan Shortbread Crust are also top-notch and fabulous. 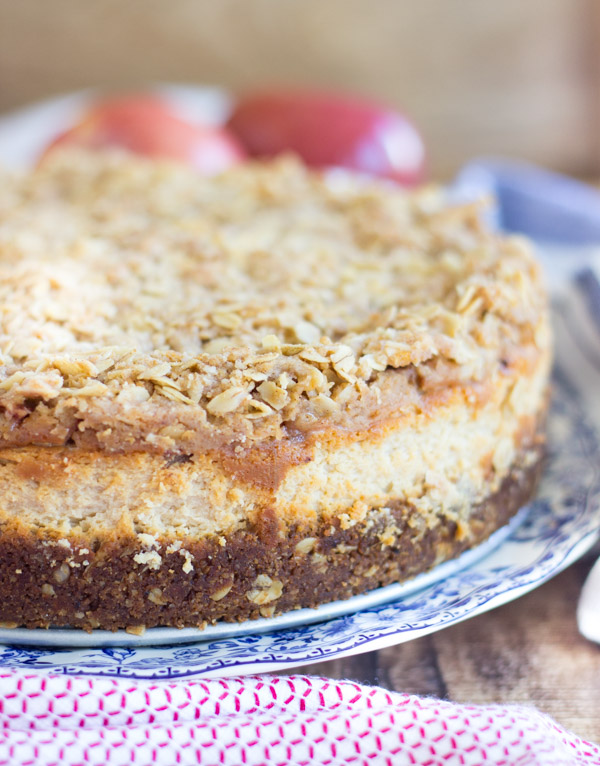 It’s the idea. I loved the idea of this Caramel Apple Crisp Cheesecake, and was proud to have thought of it. It was original and creative. And when I executed it, the cheesecake turned out even better than I hoped.

This Caramel Apple Crisp Cheesecake is my favorite in terms of originality, but the taste also cannot be beat. It’s not at all complex to make either. If you can handle a regular cheesecake, then you can easily make this one. Cheesecakes are not a lot of work in the first place – they just seem like they would be. This one is just as easy. 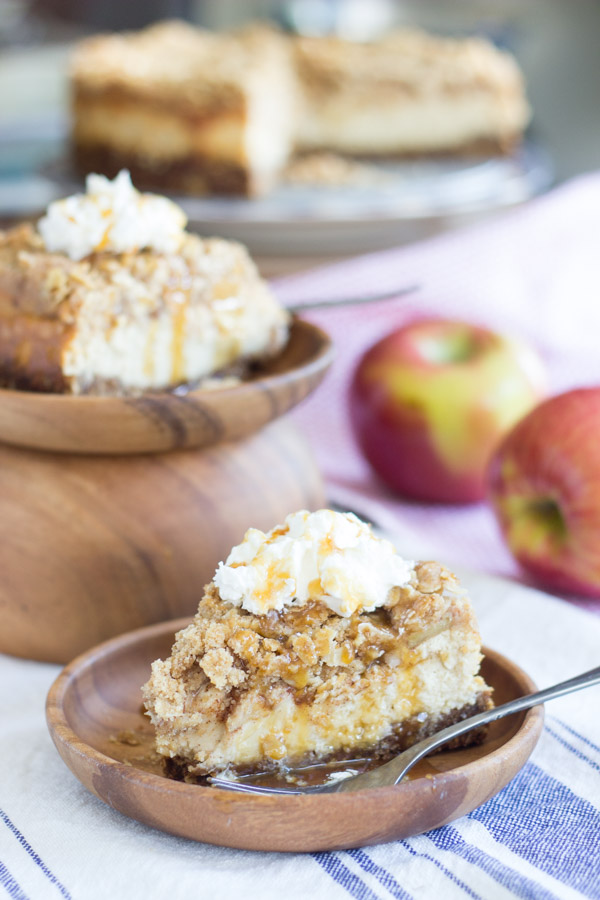 When I think of apple crisp, of course I think of oatmeal streusel. I wanted to carry that theme into the crust too, and not just the topping, so the crust is made with crushed oatmeal cookies. Oatmeal cookie crumbs!! Plus sugar and butter. Easy peasy. Just like making any other cheesecake crust, but more flavorful than graham crackers, for sure.

The cheesecake layer should be no surprise – it’s the same basic cheesecake recipe that I use for almost all my cheesecakes. The only change is that I added caramel extract in the batter to give it extra caramel flair. Flair? Or flare? I go back and forth on this. My brother will likely correct me if I’m wrong (where you at, Jeff?). Anyway, the caramel extract isn’t necessary, but recommended! 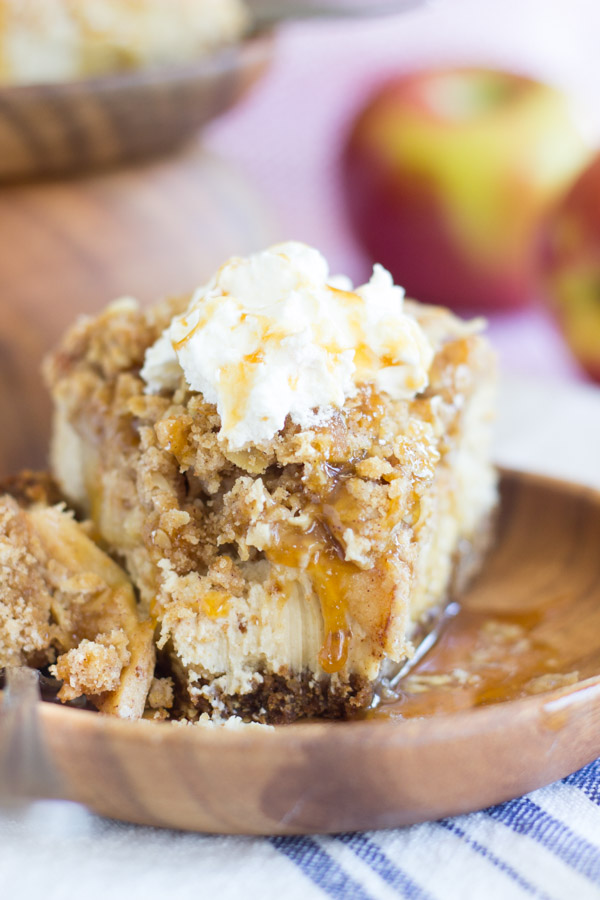 Next is a layer of cinnamon-sugar coated fresh apple slices, and a buttery, brown sugar oat-streusel. Basically, you bake apple crisp on top of a cheesecake. And then you douse it in caramel sauce.

It’s exactly as the name would suggest, a Caramel Apple Crisp Cheesecake. Combining two very different desserts, apple crisp and cheesecake, couldn’t be easier. Astonishingly. You just bake the one on top of the other. Who knew it would work out so perfectly like that? 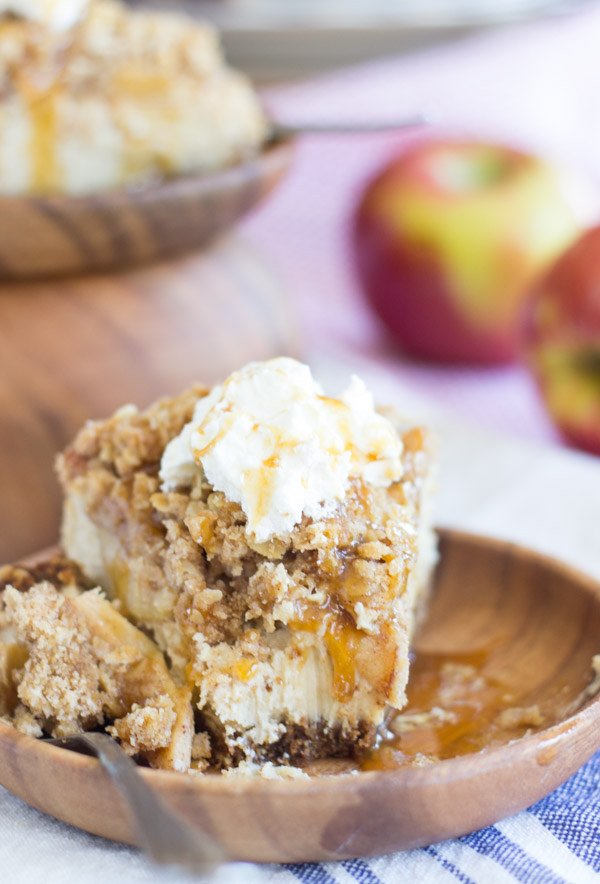 But it does. The cinnamon-sugar apples become soft, juicy, sweet, and gooey. The oatmeal streusel topping is a little crispy, sweet, and buttery, and the oats are toasty. Oatmeal streusel is such ordinary ingredients, but they come together for something extraordinary when they are combined and baked.

It’s just like the best apple crisp baked on the best creamy cheesecake, and topped with ice cream and caramel sauce. All those things are great on their own, but the whole is much greater than the sum of its parts, and this Caramel Apple Crisp Cheesecake exemplifies that. 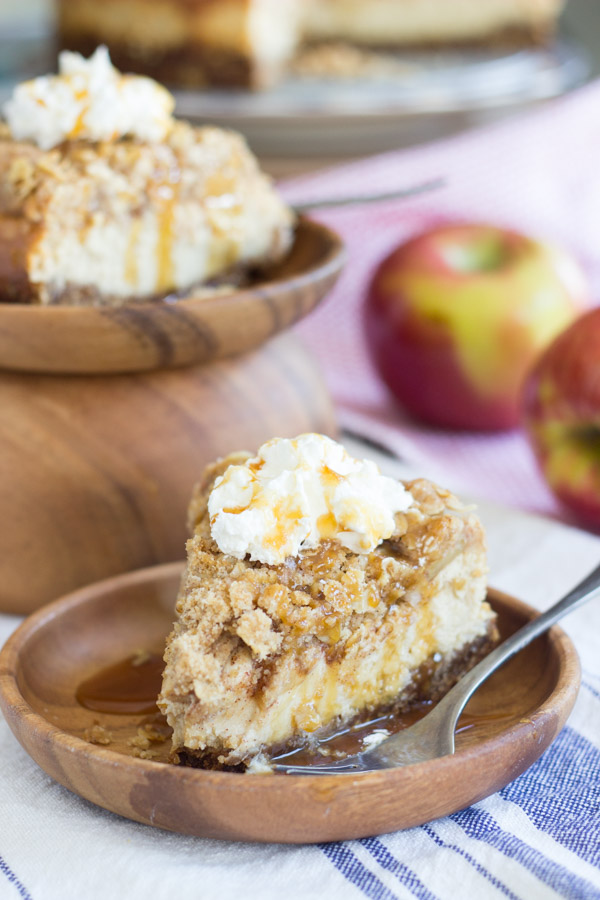 If you’re looking for other fabulous fall cheesecakes, I suggested a few above, but might I also recommend this Pumpkin Chocolate Chip Brownie Cheesecake? It’s got a full pan of brownies as crust! This Cinnamon Roll Pumpkin Cheesecake is a pumpkin cheesecake baked over cinnamon rolls as crust! And these Pumpkin Spice Oreo Cheesecakes feature – what else – a pumpkin spice Oreo as crust! Awesome options. 🙂 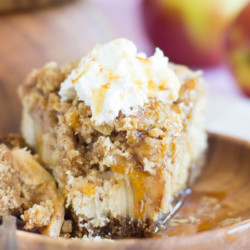 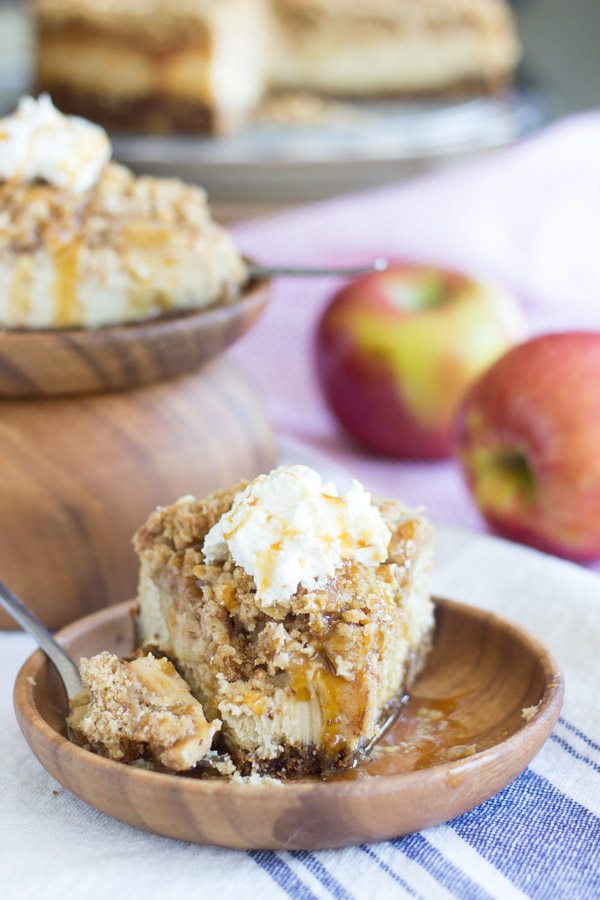