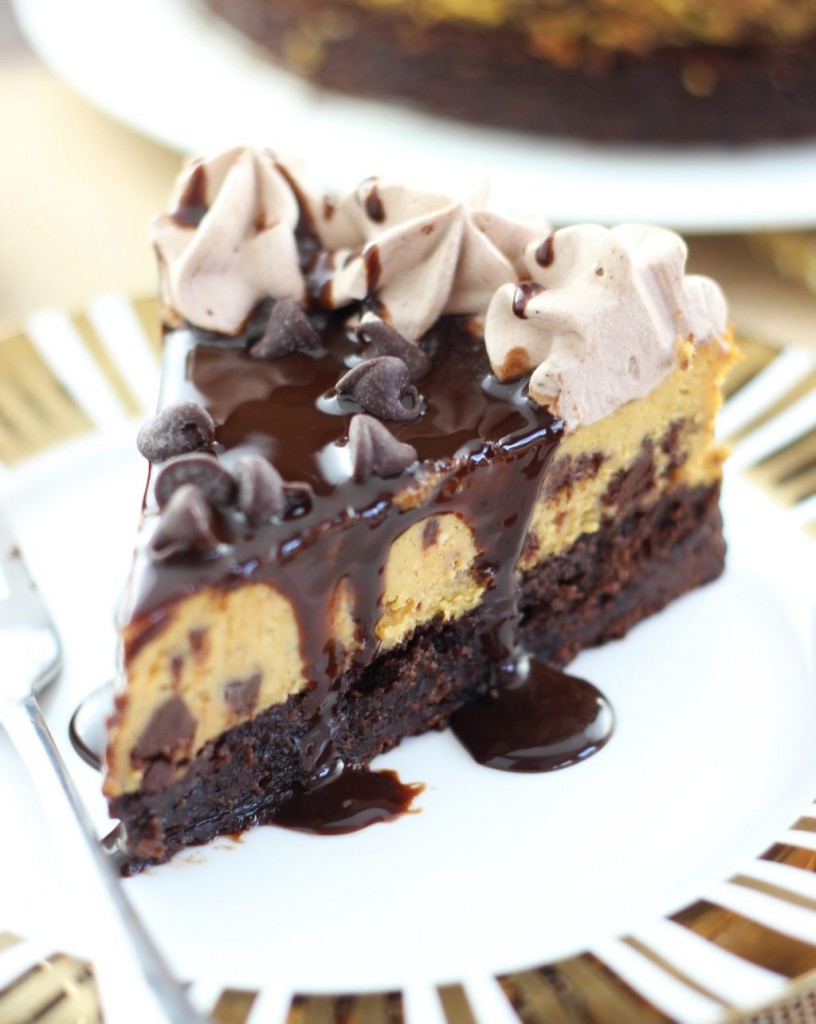 True to form, I have several pumpkin cheesecake recipes forthcoming… because I never know when to stop. I have to continue to repeat flavor profiles over and over until I feel that I have thoroughly exhausted them. 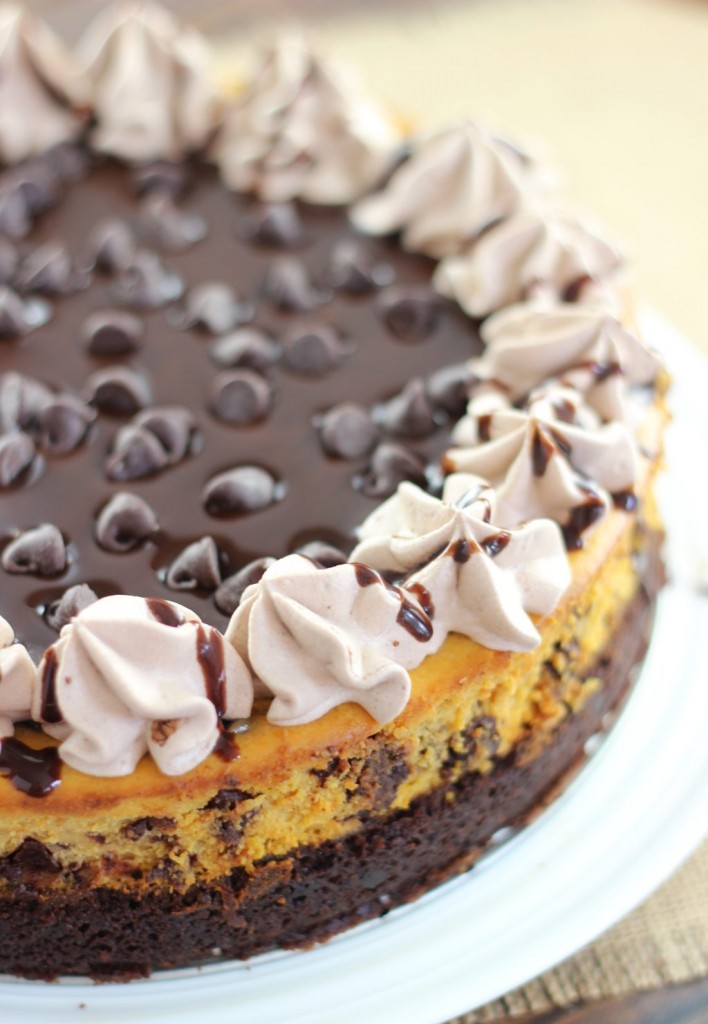 Hey, you guys usually like this stuff too. I’m only a repeat offender with ingredients because y’all also seem into the recipes. 🙂 After all, this Double Layer Pumpkin Cheesecake (no bake) is one of my most popular blog recipes, and it comes together in 10 minutes. It’s awesome. 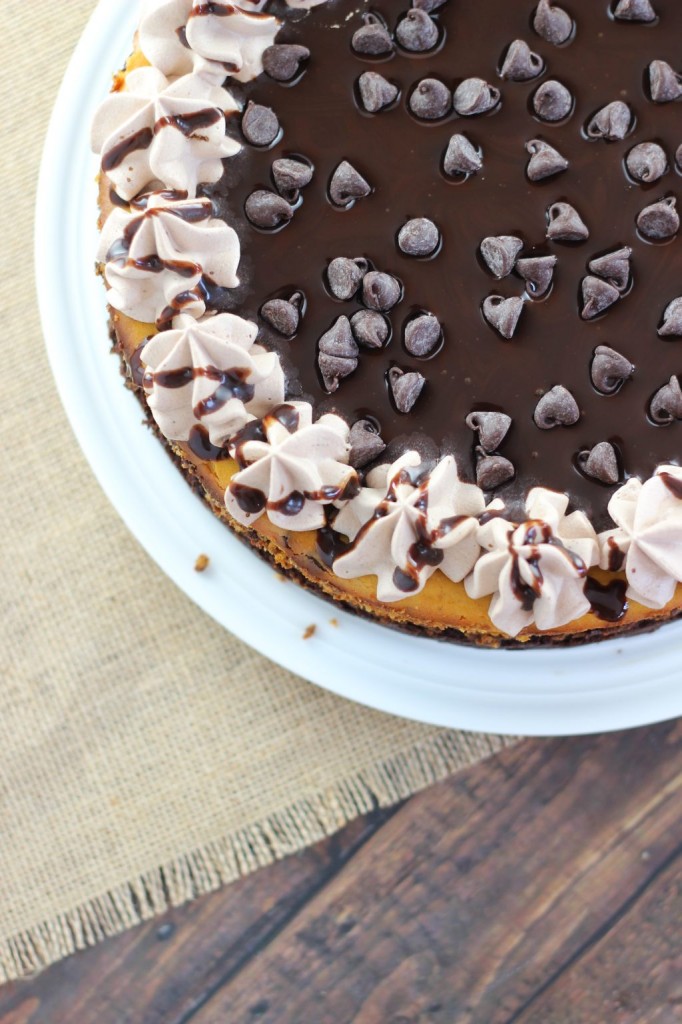 I posted a sneak peek of this Pumpkin Chocolate Chip Brownie Cheesecake on Instagram, and a few minutes after I posted it, my friend Nicole invited me over for brunch. I knew she was after the cheesecake. Shockingly, we still had some left in the fridge, which is pretty rare since cheesecake rapidly disappears in my house, but it’s probably because there were two other kinds of cheesecakes in the fridge as well. So there you go! 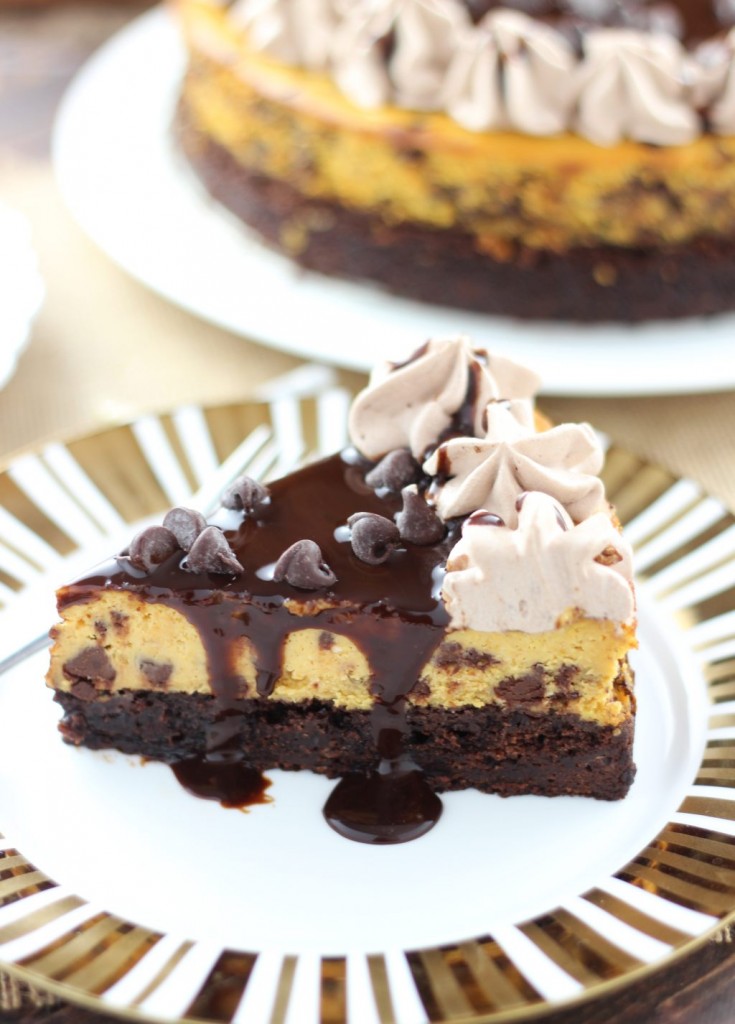 For a long time, I thought I didn’t like chocolate and pumpkin together. I fought that combo because I didn’t really see the two flavors meshing all that well, and I thought it was just forced and gimmicky. I was wrong. Wrong, wrong, wrong. So very wrong.

Chocolate and pumpkin DO belong together, and while I might prefer pumpkin a little better with other flavors, it is AMAZING with chocolate too. I see the error of my ways. This  Pumpkin Chocolate Chip Brownie Cheesecake is perfect proof I was mistaken. 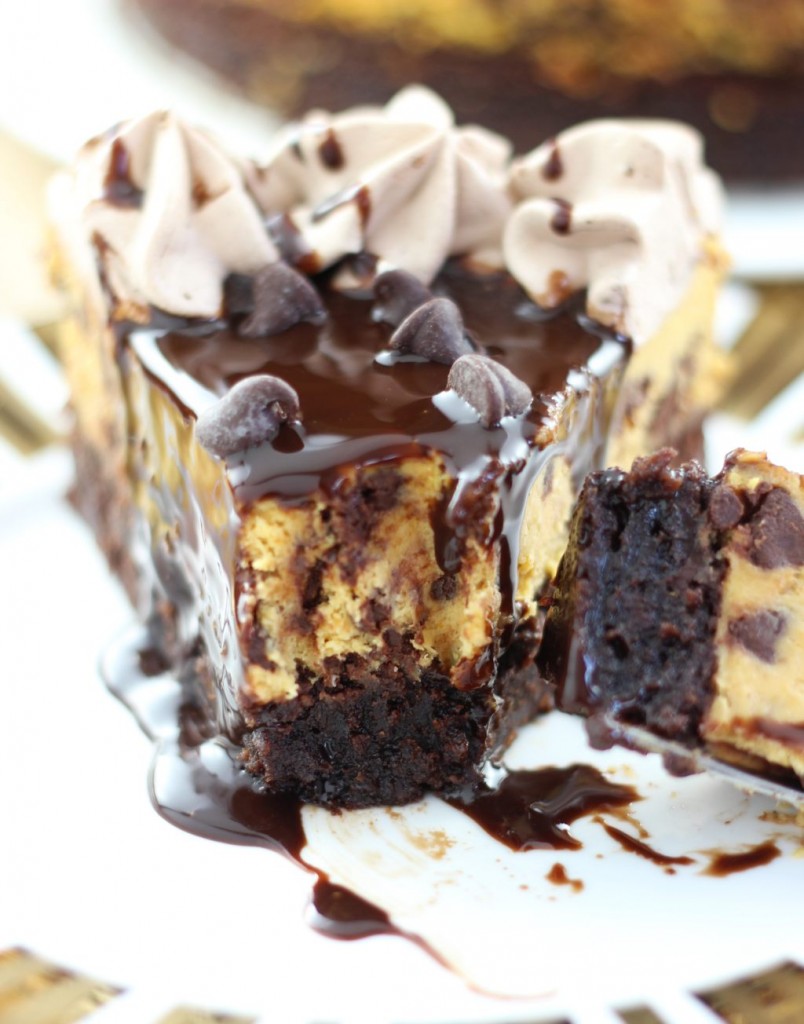 Topped with chocolate whipped cream, chocolate syrup, and a smattering of more chocolate chips, there is no shortage of chocolate and pumpkin flavors in this impressive fall dessert. You’ll adore this  Pumpkin Chocolate Chip Brownie Cheesecake. 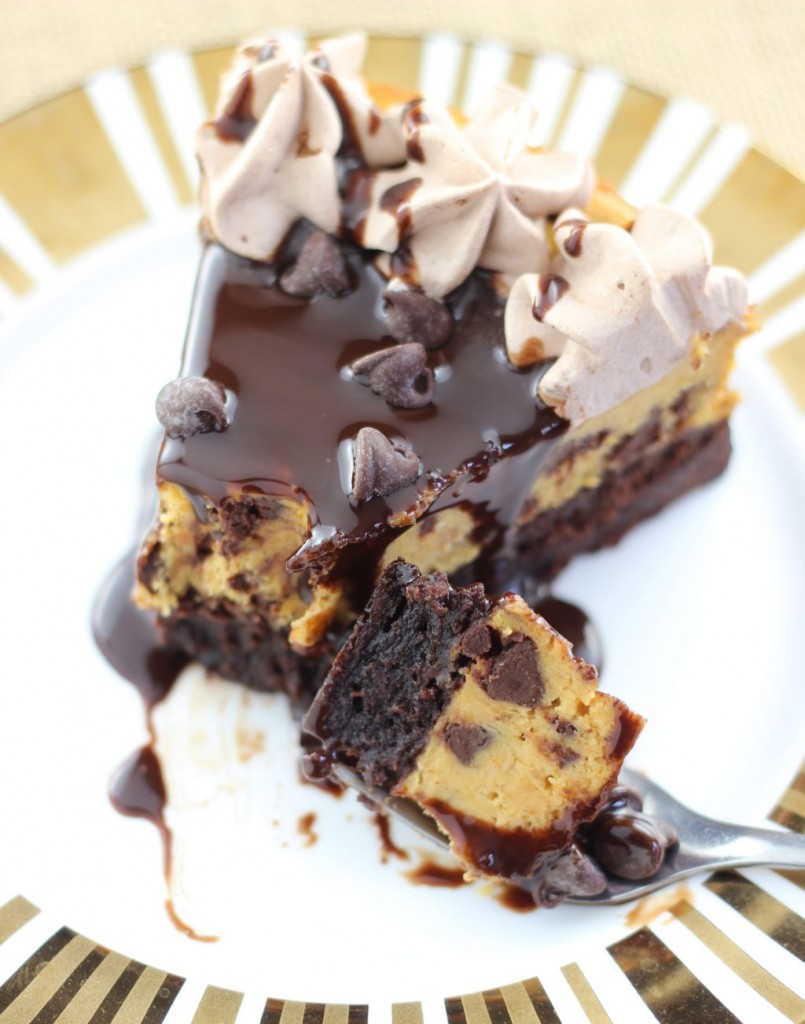 It doesn’t hurt that it’s also surprisingly easy to make. I’m not just saying that – it really is. It takes some solid baking time, but the prep work is super simple.

You’ll love it, I’m certain, but if nothing else, it’ll get you brunch invitations, and who doesn’t like to be popular, even if it’s because of your cheesecake skills? You need to try this  Pumpkin Chocolate Chip Brownie Cheesecake recipe!! 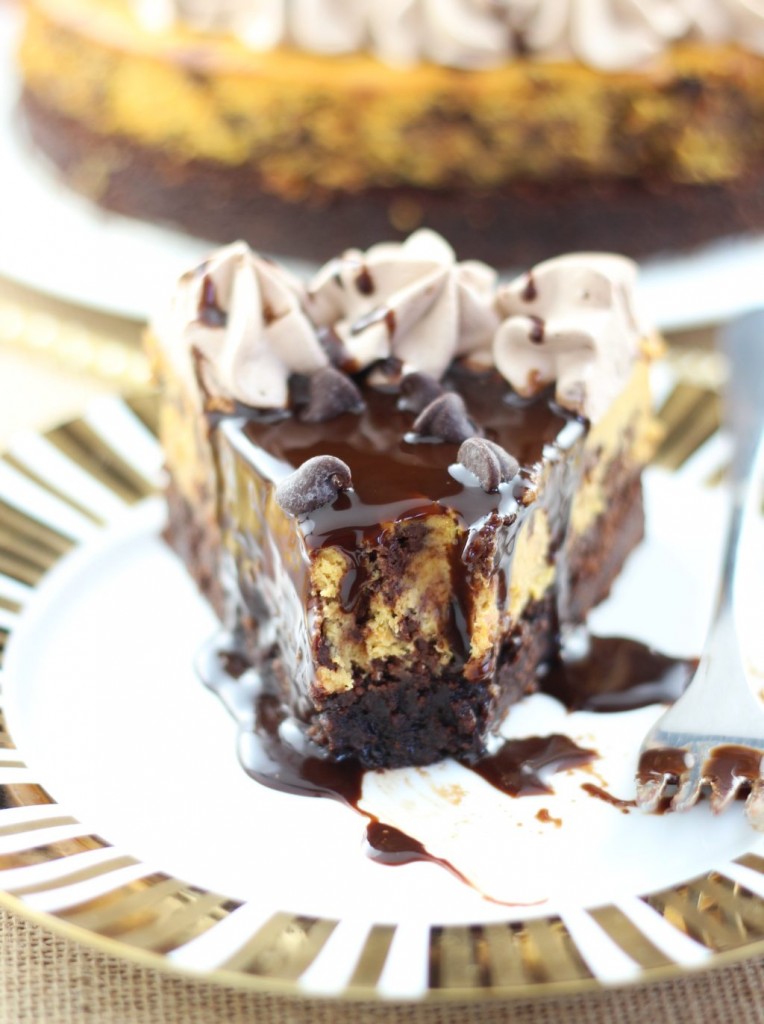 If you love pumpkin cheesecake as much as we do, I really do have quite a few on the blog. My personal favorite, and a classic staple is this Double Layer Pumpkin Cheesecake (The Traditional). It never fails to ‘wow’.

And then I also have this White Chocolate Pumpkin Cheesecake with Gingersnap Crust. That cheesecake is unbelievable. White chocolate is in the pumpkin cheesecake batter, but it’s also drenched in white chocolate ganache – GAH! 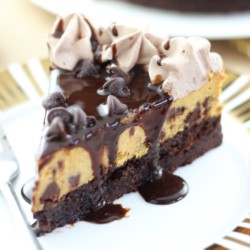 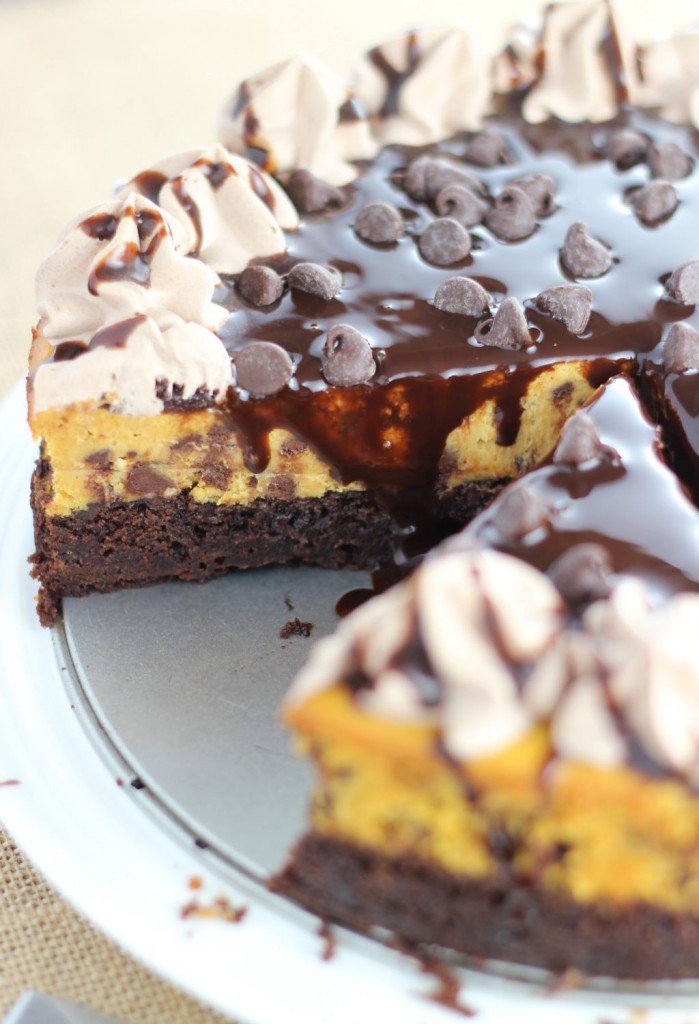