My first pumpkin recipe of the season! This Pumpkin Pie Ice Cream post is such an exciting moment. I wanted this moment to happen much sooner, and I made a vast array of pumpkin recipes weeks ago to have teed up. But my family had a horribly rough start to fall this year, so I’m behind where I thought I’d be, and we’ll leave it at that. 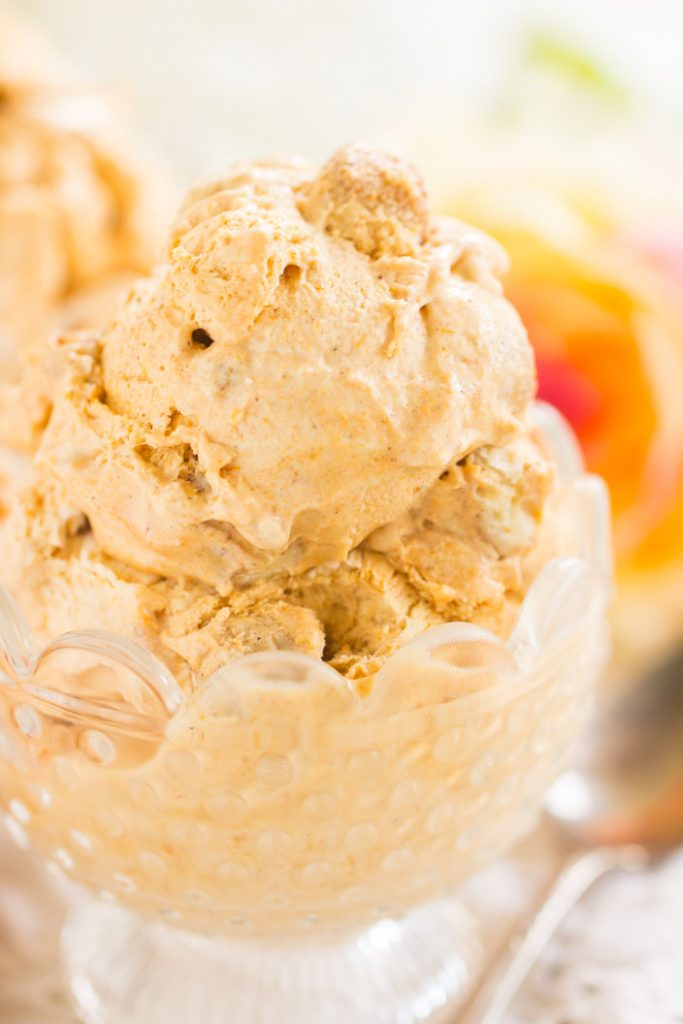 Sharing with you what I’ve made for the fall season is going to be a bright spot for me right now. I’m really looking forward to it — I love this time of year for baking. I hope it will be a gold lining for you too.

I want to start with this Pumpkin Pie Ice Cream recipe because I feel it’s a fabulous recipe to transition from summer to fall. It’s ice cream, so it’s for SUMMER, but it’s pumpkin, so it’s for FALL! 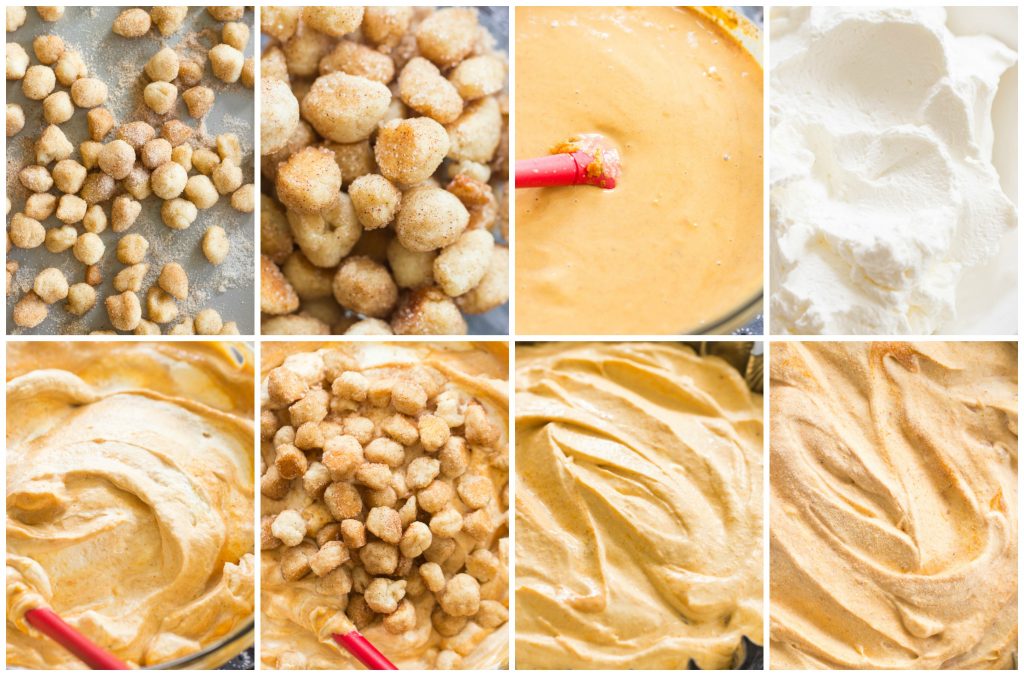 This Pumpkin Pie Ice Cream is inspired by another ice cream recipe.

Here’s a bit of background: I went to Penn State for undergrad, and Penn State is very well known for their agriculture program, including their dairy products, and specifically their ice cream. It’s really kinda famous! Both regionally and nationally.

They are seriously known for their unbelievable ice cream. And it is unbelievable, truly. 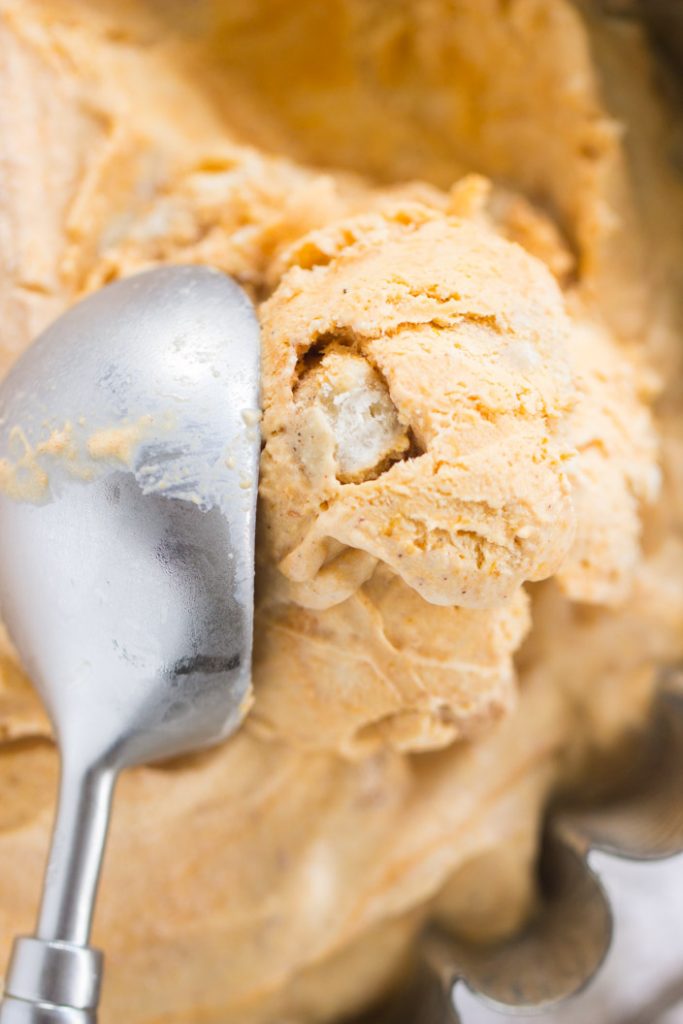 You can order it online, and have it shipped anywhere in dry ice. Last fall, we ordered 10 half-gallons from The Creamery at Penn State. A few of the seasonal favorites are their Apple Cobbler Crunch and Pumpkin Pie. Their fall and holiday flavors are just tremendous.

I wanted to make a Pumpkin Pie Ice Cream recipe this year anyway, and I ended up modeling it after Penn State’s version as best I could. It will never be quite as good as The Creamery, but this is a good, easy, at-home version. 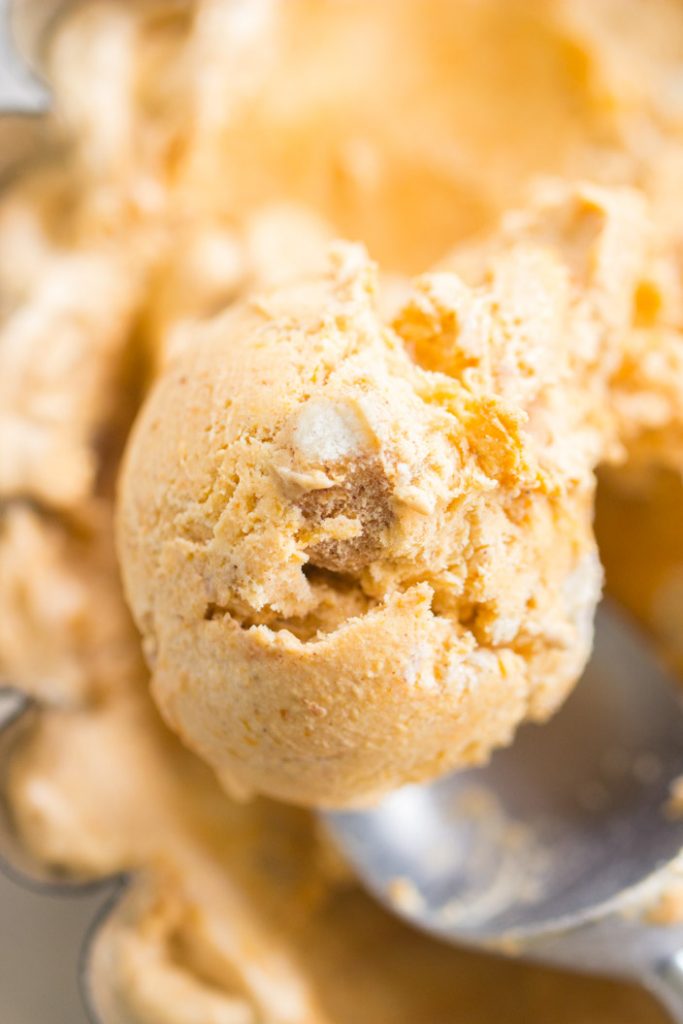 It’s special because it’s not just Pumpkin Ice Cream, but Pumpkin Pie Ice Cream. That’s key! It’s easy enough to swirl some pureed pumpkin and a few spices into an ice cream recipe, but the pie part — how is that achieved?

In the case of The Creamery, the Pumpkin Pie Ice Cream was sensational partly because of the little pie bits. That really set it apart. Oh, and The Creamery ice cream is exceptionally rich and creamy too, but setting that aside for now. 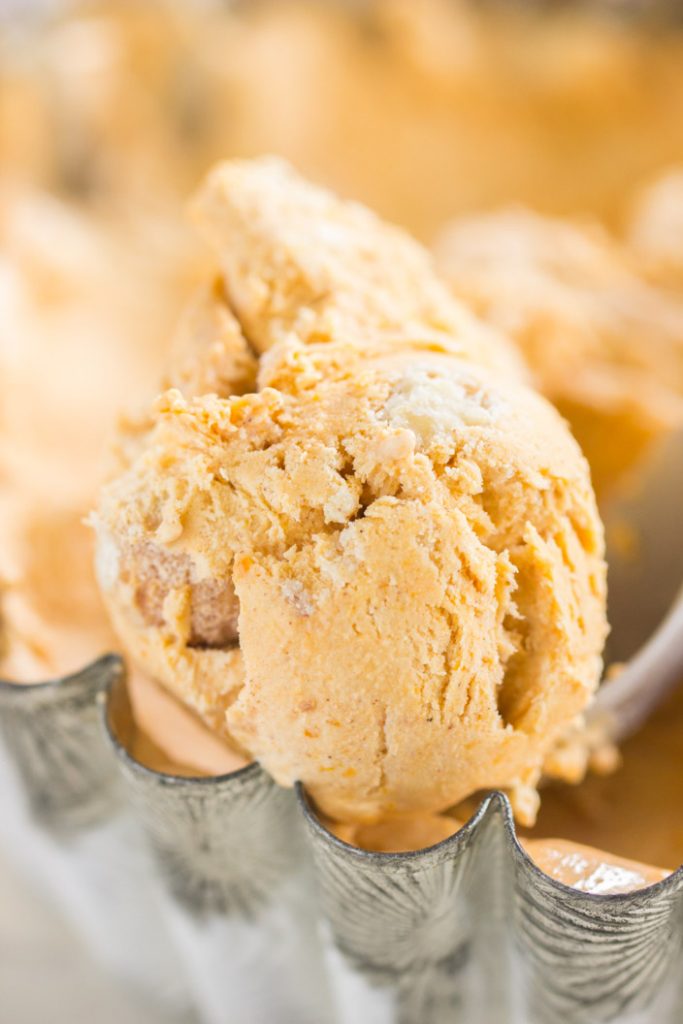 Here’s what I came up with: I used a refrigerated prepared pie crust — the kind you unroll (I have tried Pillsbury and generic/store brand, and I think Pillsbury is far superior! That’s my recommendation). I broke it into marble-sized pieces, rolled the pie crust marbles in melted butter and cinnamon-sugar, and baked them… slightly underbaked them, in fact.

Baked them til the edges were firm and crisp, but the centers were still nice and soft. 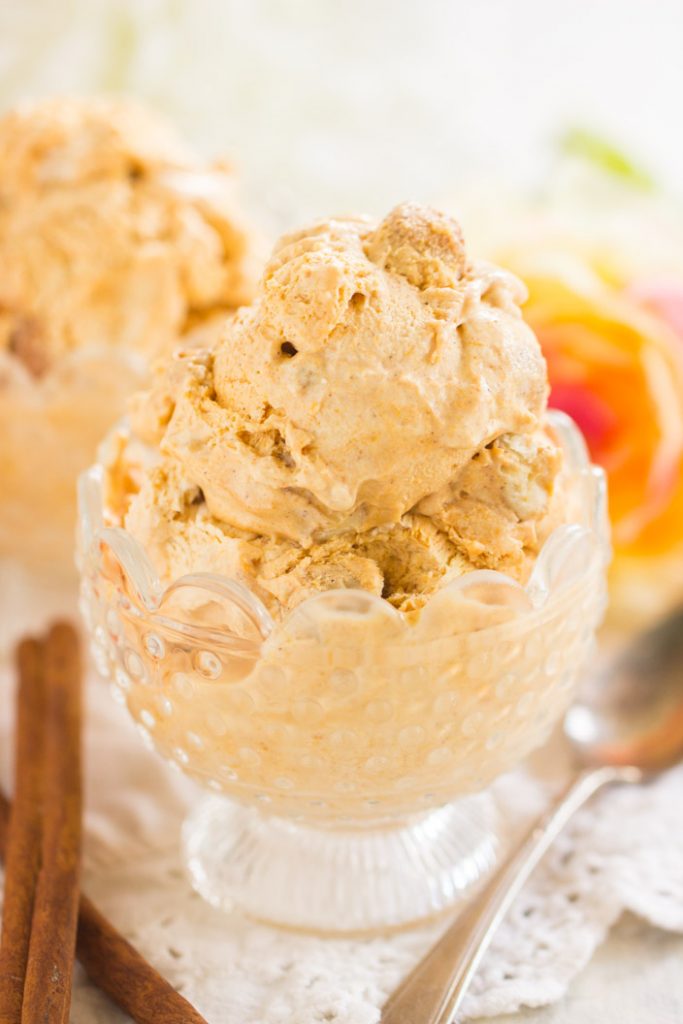 I wanted them to be sturdy enough to withstand getting folded into an ice cream, but soft enough that when frozen, they won’t break your teeth. Slight underbaking was the way to go. These are delicious in their own right.

Bits of pie crust dusted with cinnamon-sugar. I call them Pie Crust Pebbles and they should be their own separate recipe!

When my mom makes a pie crust, she trims the edges, and whatever dough is left, she brushes with butter, sprinkles with cinnamon-sugar, rolls up, and cuts into pinwheels. The Pie Crust Pebbles remind me of that. So so addictive. 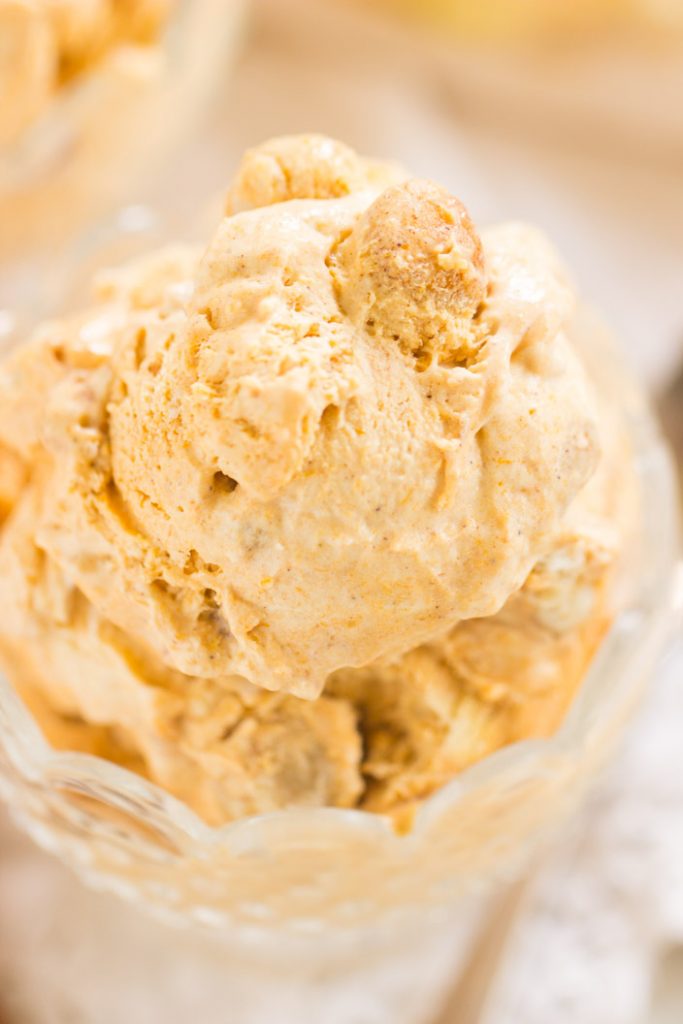 One of my favorite recipe discoveries was that homemade no churn ice cream is a literal breeze to make. The base itself is like two ingredients: whipped cream and sweetened condensed milk. What you do with this basic canvas is up to you!

One of the first times I made homemade no churn ice cream was this No Churn Peanut Butter & Jelly ice cream. It’s like 4 ingredients total and takes about 5 minutes to prep. Ever since, I’m determined to make more ice cream recipes. 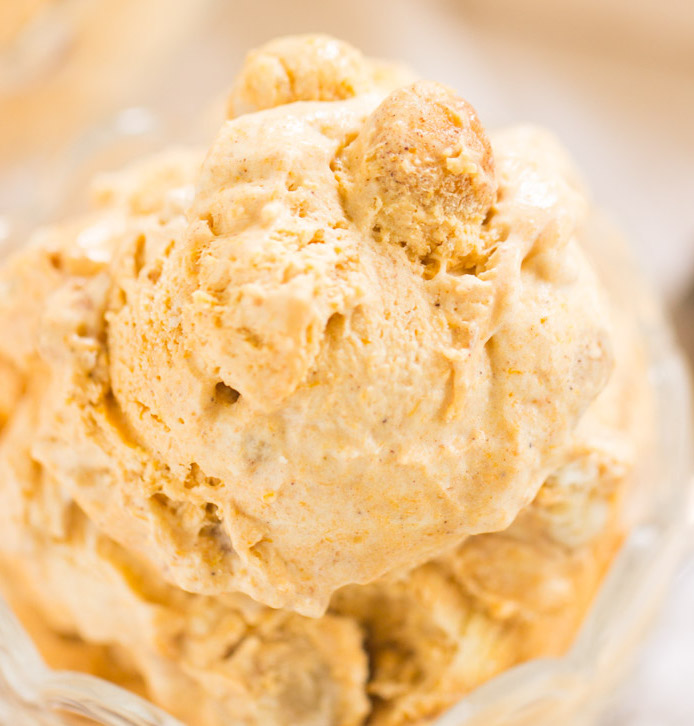 It will ABSOLUTELY be the pumpkin recipe to get you in the spirit of fall! If you are ready for pumpkin things, but aren’t ready to dig into pumpkin pie yet, this Pumpkin Pie Ice Cream is the answer. 🙂

A few other pumpkin recipes that make for great transition into fall – these Pumpkin Cookies with Brown Butter Icing. They are so soft and pillowy, so tender and fluffy, and the icing is to-die-for. They’re one of my most popular fall recipes. Also very popular, and a recipe that I’ve made for decades now, this Double Layer No Bake Pumpkin Cheesecake. It comes together in 10 minutes flat! 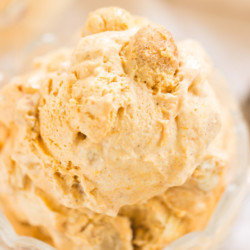 Sarah
This Pumpkin Pie Ice Cream is not shy on pumpkin, spice, or cinnamon-sugar pie crust bits! It's simple and quick to prep, and has a short ingredient list. If you don't want to let go of summer, but you're excited for fall, this Pumpkin Pie Ice Cream recipe is the answer.
Print Recipe Pin Recipe
Prep Time 25 mins
Chill time 4 hrs
Total Time 4 hrs 25 mins
Course Dessert
Servings 6