A quick bit of background: I went to Penn State for undergrad, and Penn State is very well known for their agriculture program, including their dairy products, and specifically their ice cream. It’s really kinda famous! Both regionally and nationally. 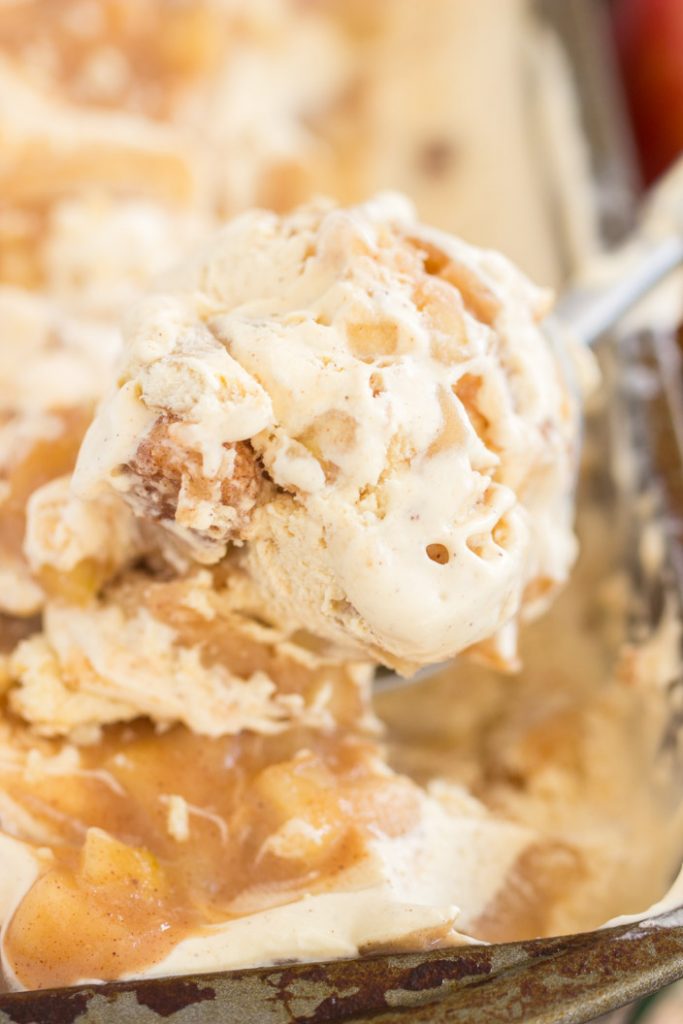 You can order it online, and have it shipped anywhere in dry ice. Last fall, we ordered 10 half-gallons from The Creamery at Penn State. A few of the seasonal favorites are their Apple Cobbler Crunch and Pumpkin Pie. Their fall and holiday flavors are just tremendous.

I wanted to recreate my favorite seasonal flavors. I’m not attempting to replace The Creamery ice cream because I feel a copycat version will never be quite as good, but I did want to model my own versions after them as best I could. It’s always handy to have an at-home recipe. 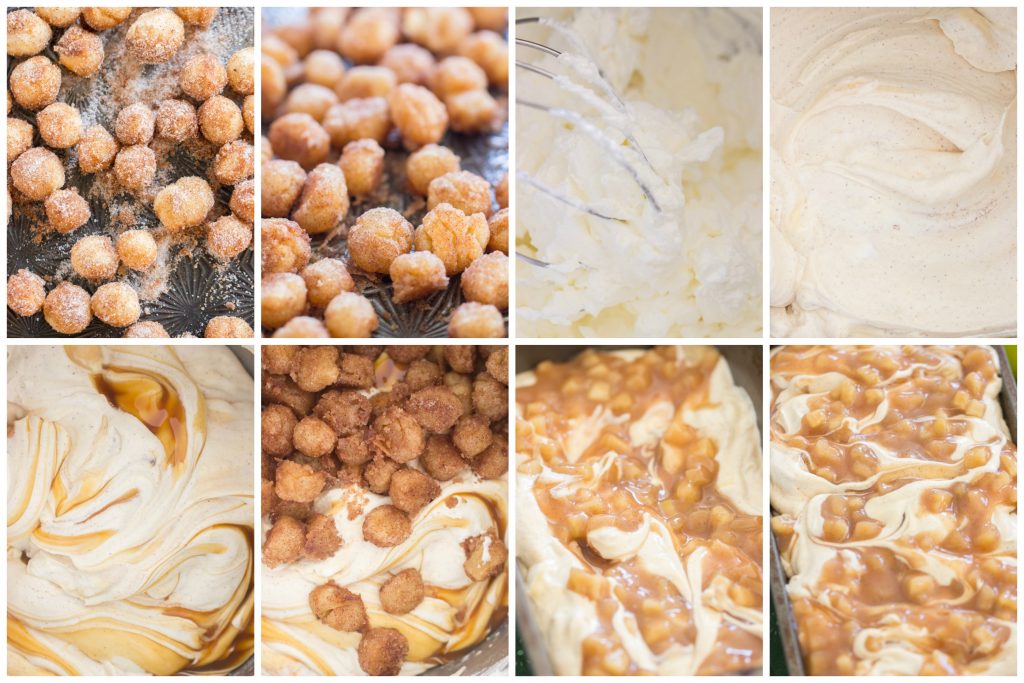 First and foremost: it contains this from-scratch, homemade, quick & easy stove-top Apple Pie Filling that I posted a few days ago. My Apple Pie Ice Cream has generous swirls of apple pie filling throughout the ice cream. 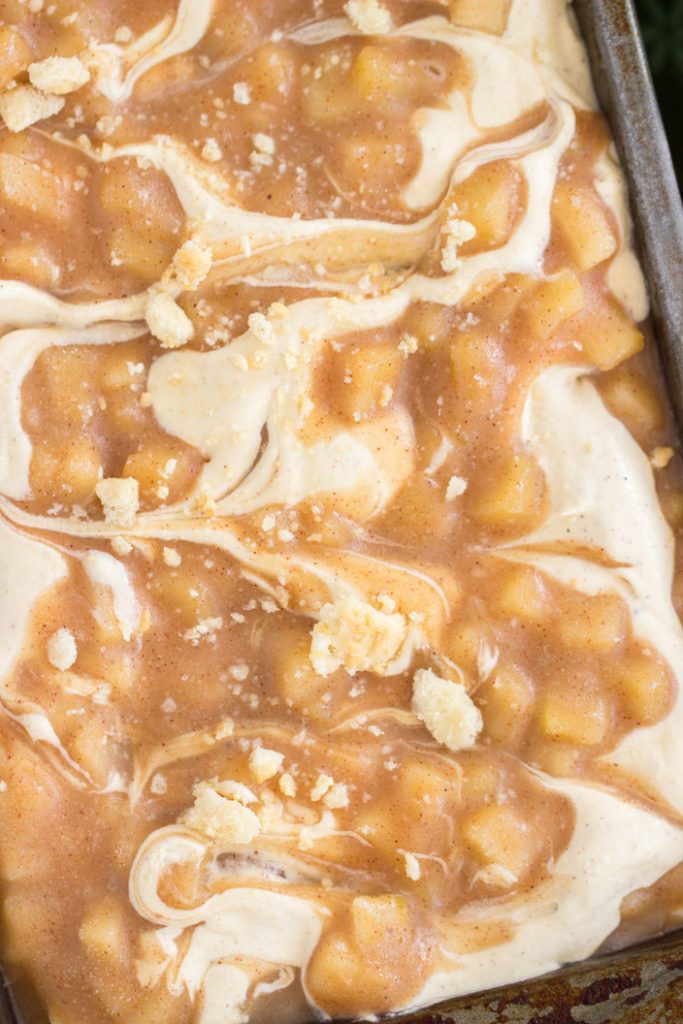 Nothing beats that Apple Pie Filling! It’s the best there is. It’s perfectly thick, sweet, gooey, and potent with fall spices. It’s a quick stove-top filling recipe, and is based on our family favorite pie recipe that we’ve used since the ’60s.

That recipe produces a sweet, slightly tangy, spiced cinnamon syrup, and the apples get doused in it. The cinnamon syrup softens the apples as they cook, infuses them with goodness, and also makes the whole thing insanely ooey-gooey. The syrup is A-M-A-Z-I-N-G, and you’ll want to eat a whole bowl of it like soup, it’s that delicious. 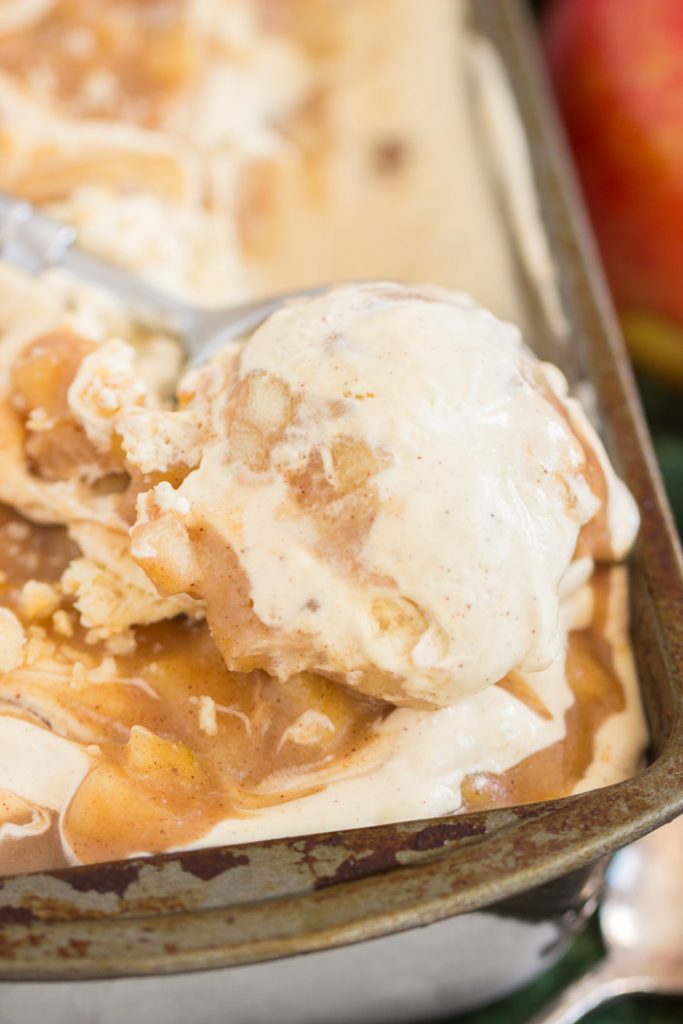 And lots of that filling is swirled throughout this Apple Pie Ice Cream.

The second reason that this particular recipe is so sensational is the little pie bits.

I used a refrigerated prepared pie crust — the kind you unroll (I have tried Pillsbury and generic/store brand, and I think Pillsbury is far superior! That’s my recommendation), and broke it into marble-sized pieces, rolled the pie crust marbles in melted butter and cinnamon-sugar, and baked them. 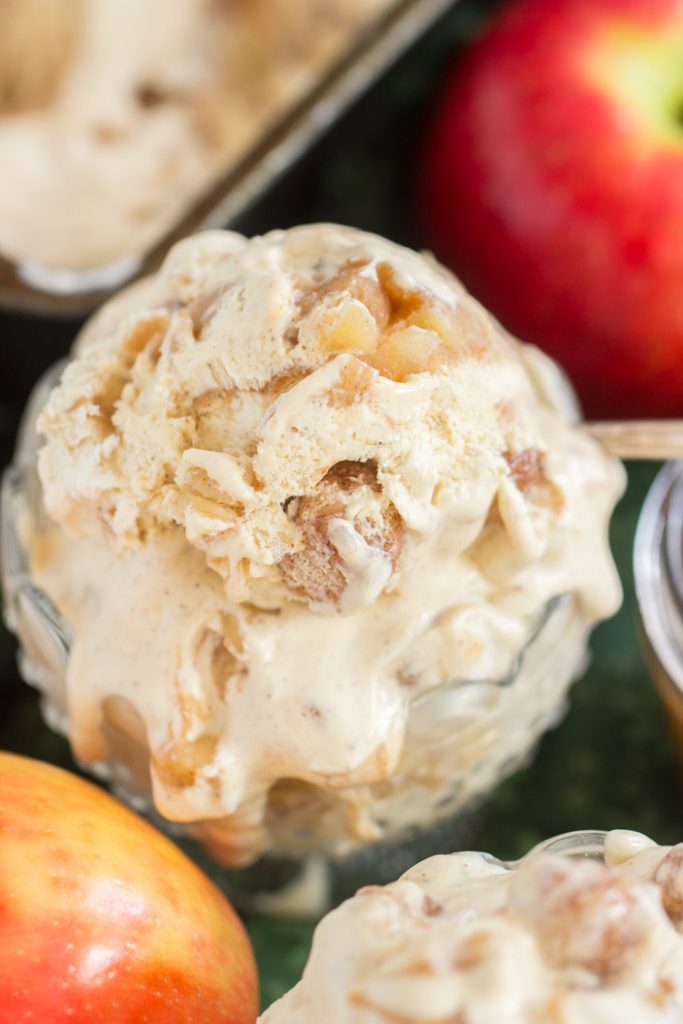 Just til the edges were firm and crisp, but the centers were still nice and soft. They’re sturdy enough to withstand getting folded into an ice cream, but soft enough that when frozen, they aren’t brittle or overly crunchy.

These are delicious in their own right. Bits of pie crust, baked in butter and a dusting of cinnamon-sugar. I call them Pie Crust Pebbles and they should be their own separate recipe! They’re so poppable and addictive. Try not to eat them all before they make it into the Apple Pie Ice Cream. 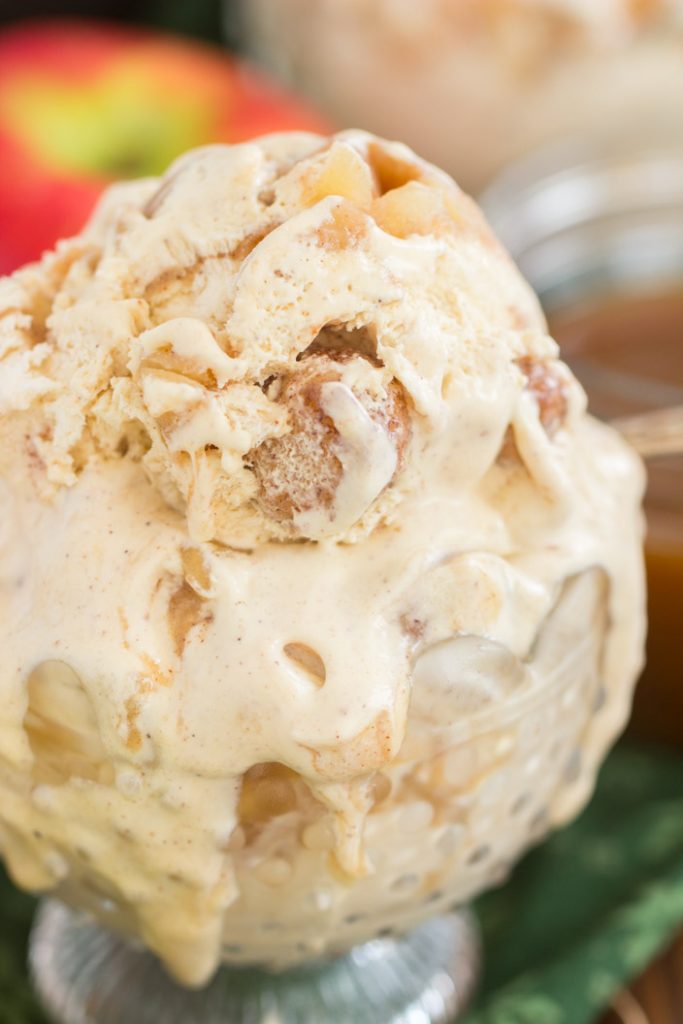 Both of those things — the Apple Pie Filling and the Pie Crust Pebbles — swirled into a sweet, creamy, rich ice cream base, are what make this Apple Pie Ice Cream so exceptionally special.

Oh, I threw in a bit of caramel sauce too because — why not? It really adds to it. Just a touch and it is enough to drive everything home. 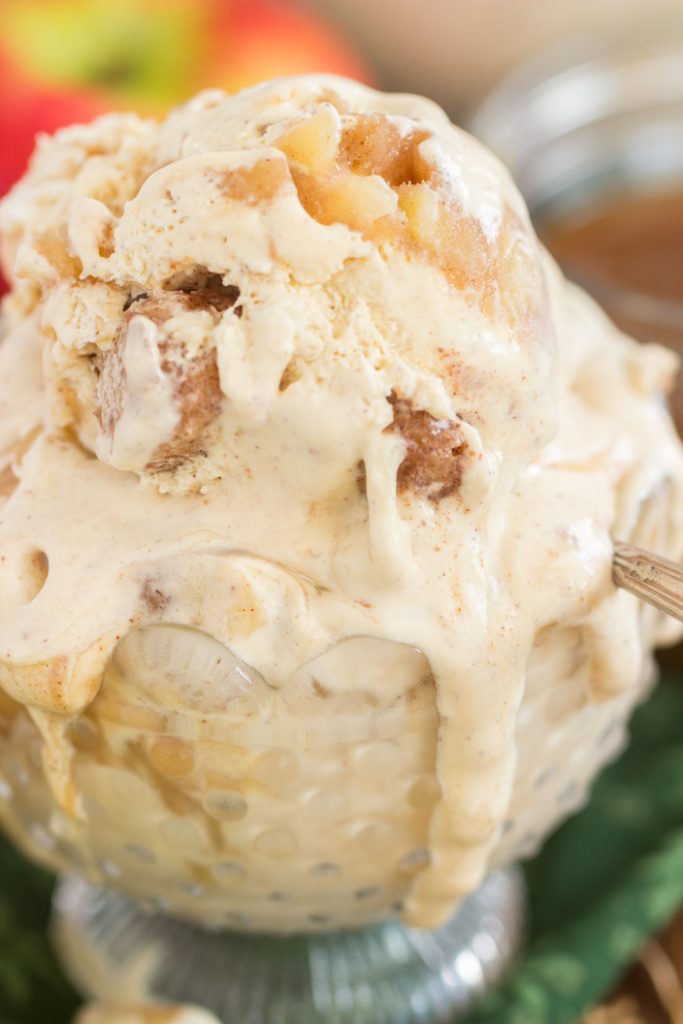 By the way, the ice cream base itself is two main ingredients: whipped cream and sweetened condensed milk. What you do with the basic canvas is up to you, but homemade, short-cut ice cream is a literal breeze.

This Apple Pie Ice Cream is not difficult or complex, but it has a few steps. If you would like to minimize steps or are in a time-crunch, you could pick up a can of apple pie filling to substitute. I wouldn’t, but you could if you needed to. And you could skip the pie crust pebbles altogether, if you must. 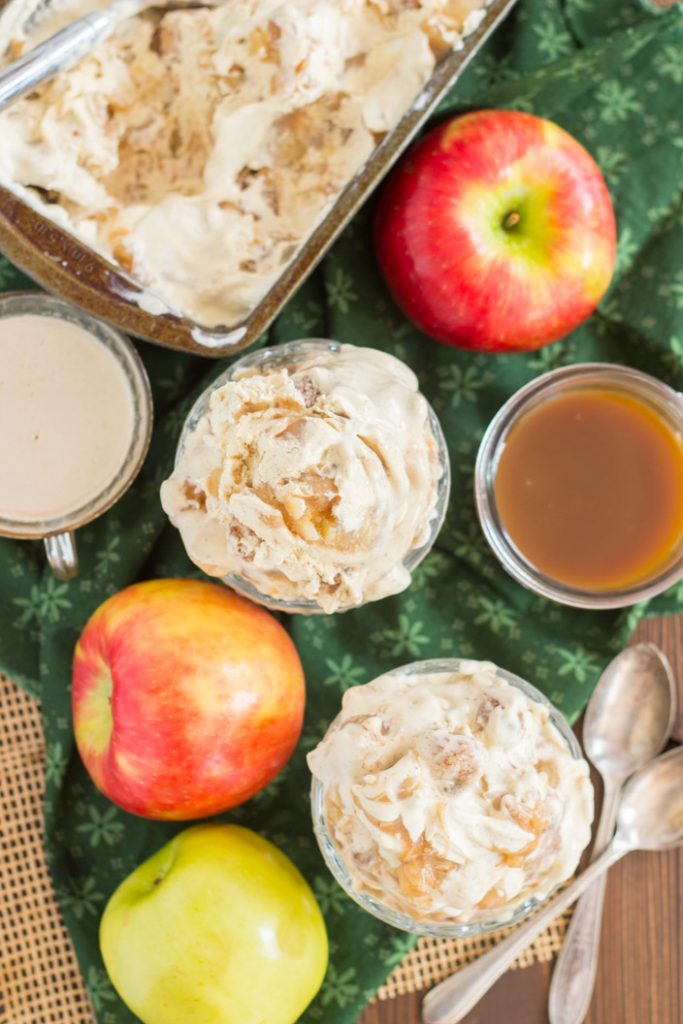 Again, I wouldn’t, and I’m not recommending this, but you could if you need to cut corners for some reason.

Altogether, this Apple Pie Ice Cream is one of my favorite recipes this season, and I’m really proud of it. Each element is amazing on its own, and they come together to make a true powerhouse recipe! 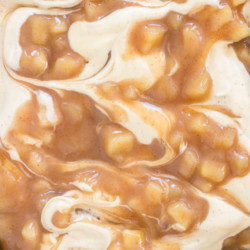 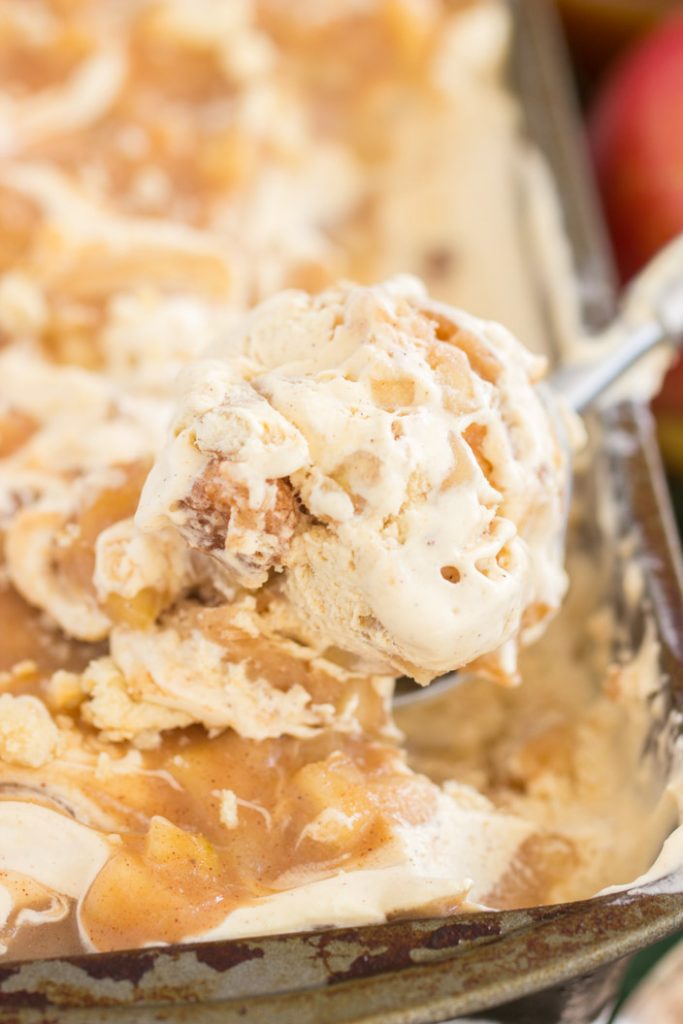