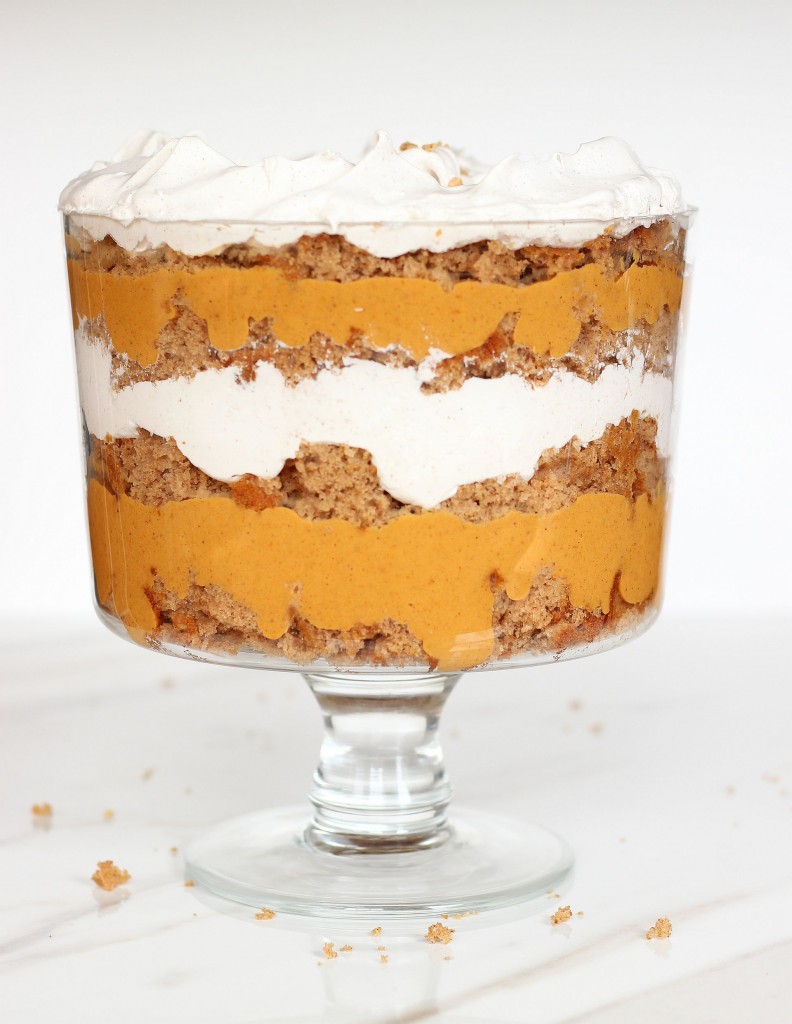 Trifles are easy to throw together. Literally. Trifles are fantastic to make because they don’t have to look perfect. By nature, they’re a bit more haphazard. You literally just sort of throw everything together, attempt for it to look picturesque and pretty, but accept that it will be a bit haphazard. That’s part of their charm! This Pumpkin Butterscotch Spice Cake Trifle is no exception.

Correction: Trifles *should* be easy, unless you make it hard on yourself. I did this –>self-imposed difficulties in assembling the trifle. 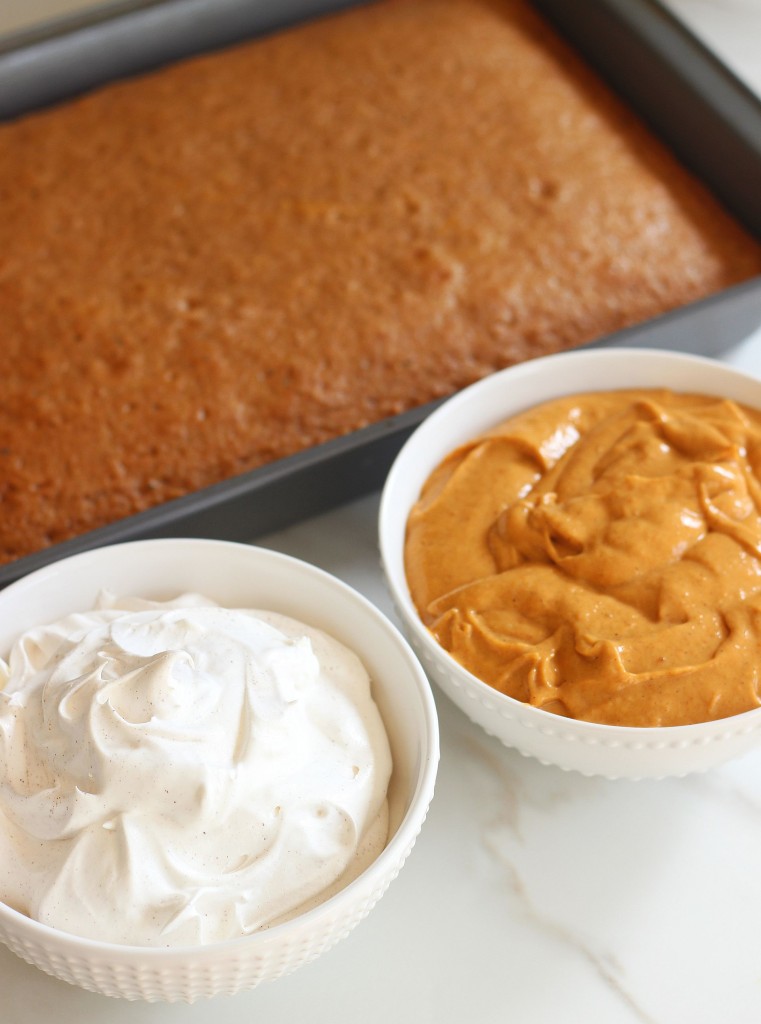 First, I nearly cried when I ran out of Cool Whip halfway through because I didn’t properly ration or measure. I just slapped it on. Okay, I didn’t cry, but we’ll say I was… highly distressed. Without any backup containers in the house, I briefly pondered whose house I could possibly be in, then walked out the door in my pajamas (yes, I was that person) and drove to the corner store for another container. Or four. I can’t be caught in this scenario again, after all.

Btw, I like to refer to the Dollar General down the street as the ‘corner store’ because it sounds much more quaint and 1950s than ‘the dollar store.’ Don’t you think? 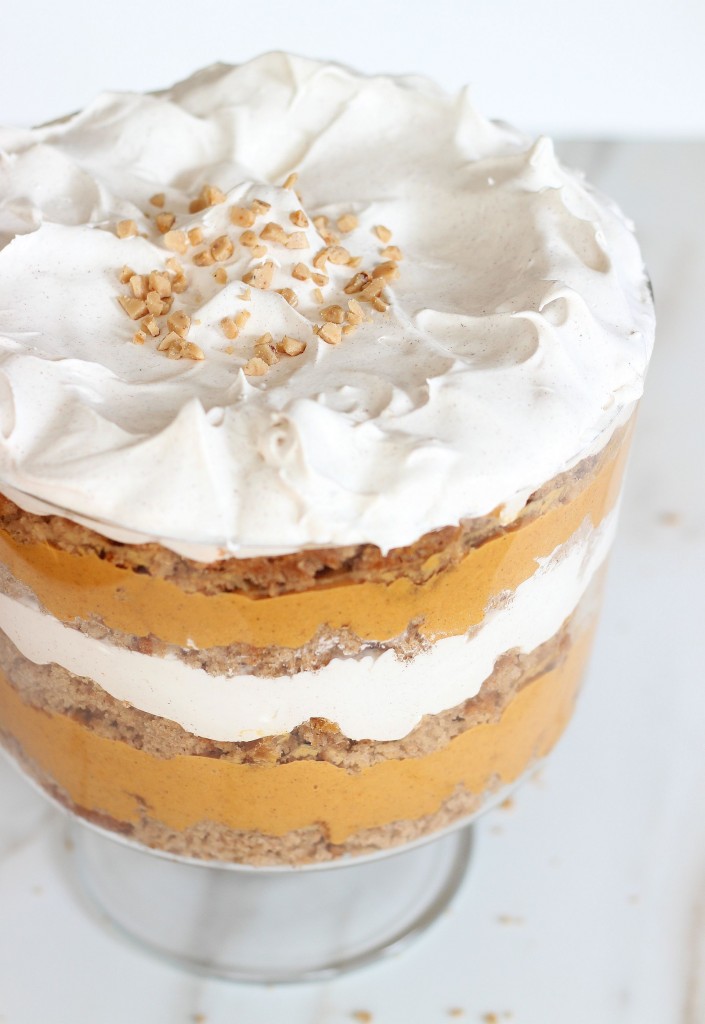 Things move along more swimmingly after the emergency Cool Whip run, but I probably could’ve made the layers a bit more even in this Pumpkin Butterscotch Spice Cake Trifle. Who really cares though? Remember… we’re going for charm.

Next, I plan to make tall and puffy mountains of Cool Whip atop the trifle. They turn out to be more like little hills. I dunno… they’re still pretty cute.

Then I sprinkled the top with toffee bits, not because there’s toffee anywhere else in this trifle. No, they’re just for fun. I was supposed to reserve cake crumbs as a garnish, but I made the affirmative decision to go with toffee bits. Yes, that’s my story and I’m sticking to it. I planned the toffee bits. I actually really did.

Lastly, I decide that I’m really, really, *really* in the mood for Pumpkin Butterscotch Spice Cake Trifle and will eat it for breakfast, lunch, dinner, and everything in between because in an instance of very poor planning, I made it the day before we are going out of town for a week. Pumpkin Trifle ALL DAY. Perfect!

That is the saga of this Pumpkin Trifle recipe. But seriously, it’s easy. Just make sure to have the correct amount of ingredients on hand and you’ll be golden! This Pumpkin Butterscotch Spice Cake Trifle is luscious. Lots of layers of spice cake, pumpkin-butterscotch pudding, and fancified Cool Whip (by way of some cinnamon and maple syrup). It’s altogether quite light, but is packed with so many great flavors and spices, best of all pumpkin, of course. 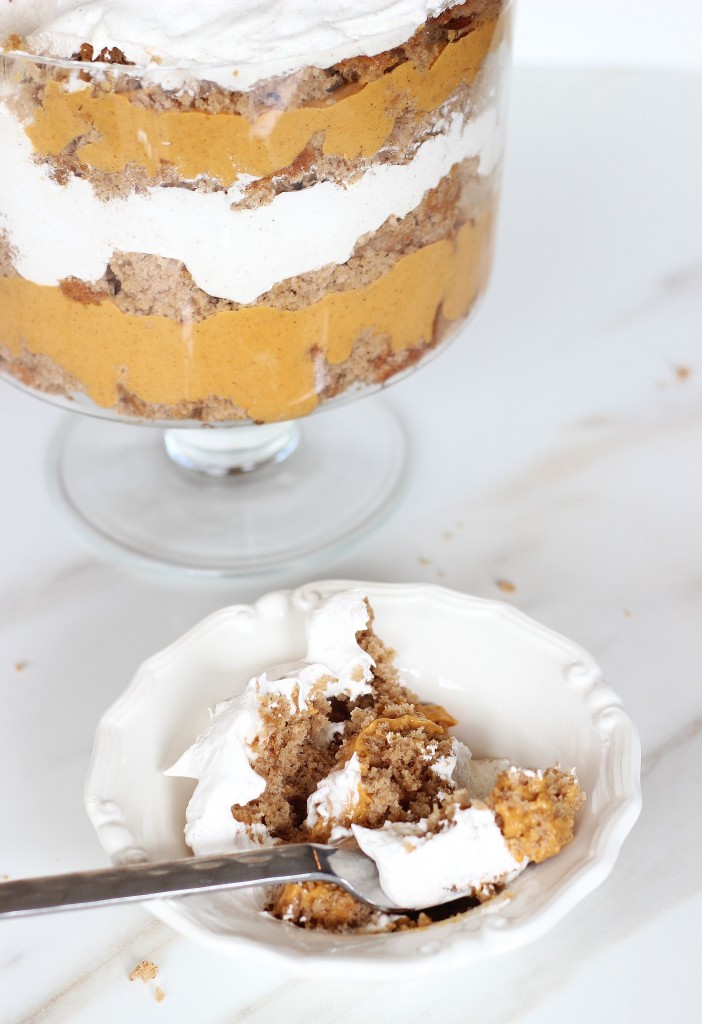 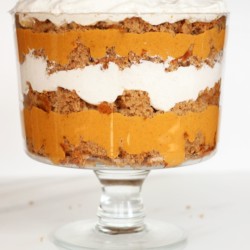 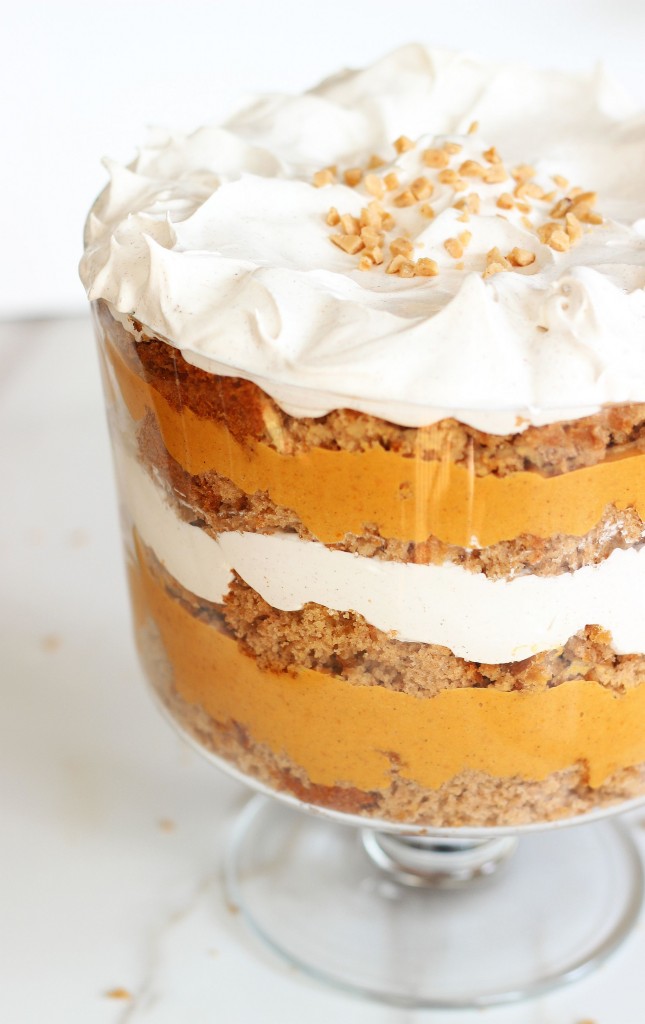 I have faith in your ability to portion out the Cool Whip properly, despite my own shortcoming, but just in case, I’ve added extra into this Pumpkin Trifle recipe so you don’t have to run to the dollar store in your PJs. 🙂

If you’re interested in other simple pumpkin desserts, I recommend this Double Layer Pumpkin Cheesecake (no-bake) that comes together in about 10 minutes flat, these Pumpkin Nutella Whoopie Pies (the Nutella Buttercream filling is the bomb!), or these Pumpkin Spice Latte Cookies – they’re so chewy and wonderful. These are awesome recipes!