This Cinnamon-Streusel Zucchini Cake is rich and buttery like a poundcake, dense and moist, but with super soft crumb. Gads of zucchini provides crazy moisture, a thick ribbon of cinnamon-sugar weaves through the middle, and a sheet of cream cheese glaze caps it off! This Cinnamon-Streusel Zucchini Cake is perfect for breakfast, brunch, or dessert! 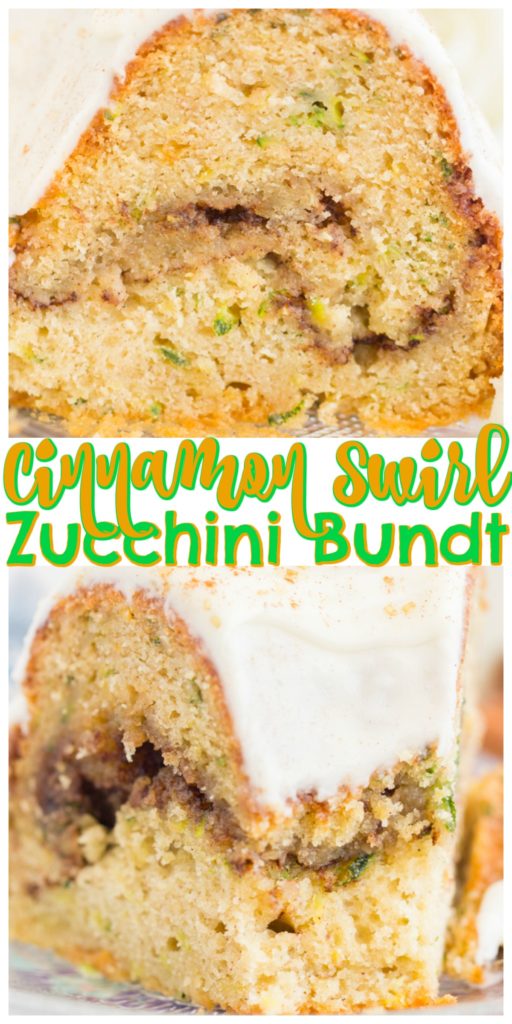 Let’s stay on zucchini because I’ve got one more zucchini recipe to post before it’s time to conjure all the fall baking vibes. I usually have 5 or 6 zucchini recipes in a summer, but I only have two this year. That’s the sort of year it’s been, as we all know too well. 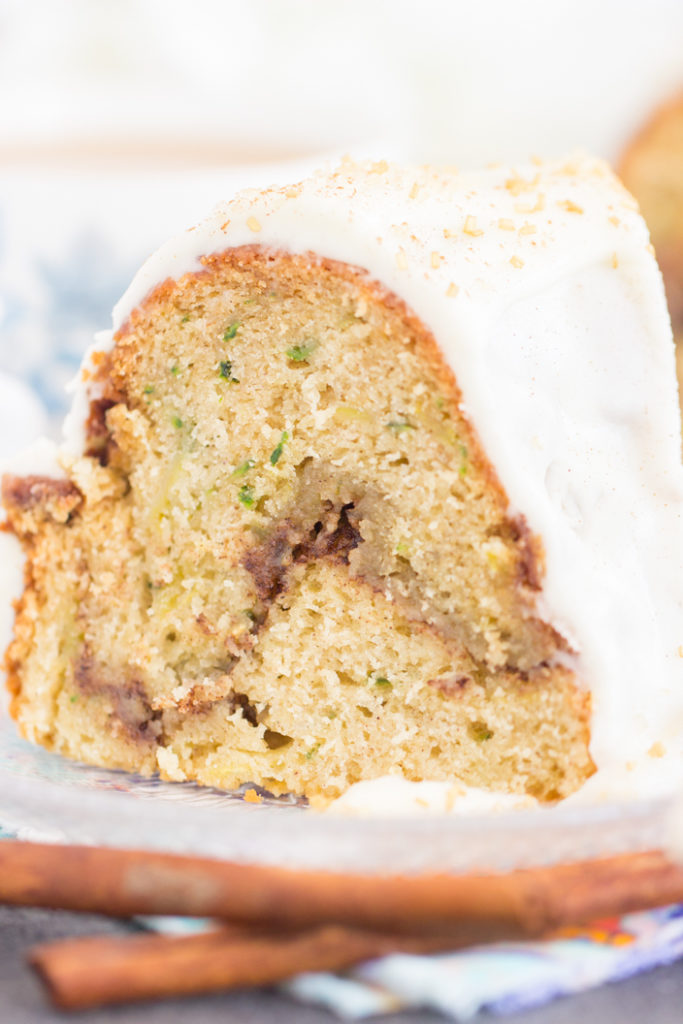 I shared this Lemon Zucchini Bread with Crumb Topping recently, and that is my only other zucchini recipe for summer 2020. Sad! Next year I’ll come back bigger and stronger. We all will.

But the zucchini recipe I have today, this Cinnamon-Streusel Zucchini Cake, is a really, really good one, so quality over quantity. I’m pretty bundt cake-obsessed, truth be told, and bundts are some of my favorite cakes. They’re easier than layer cakes and cupcakes, and they’re prettier than sheet cakes. Win-win. 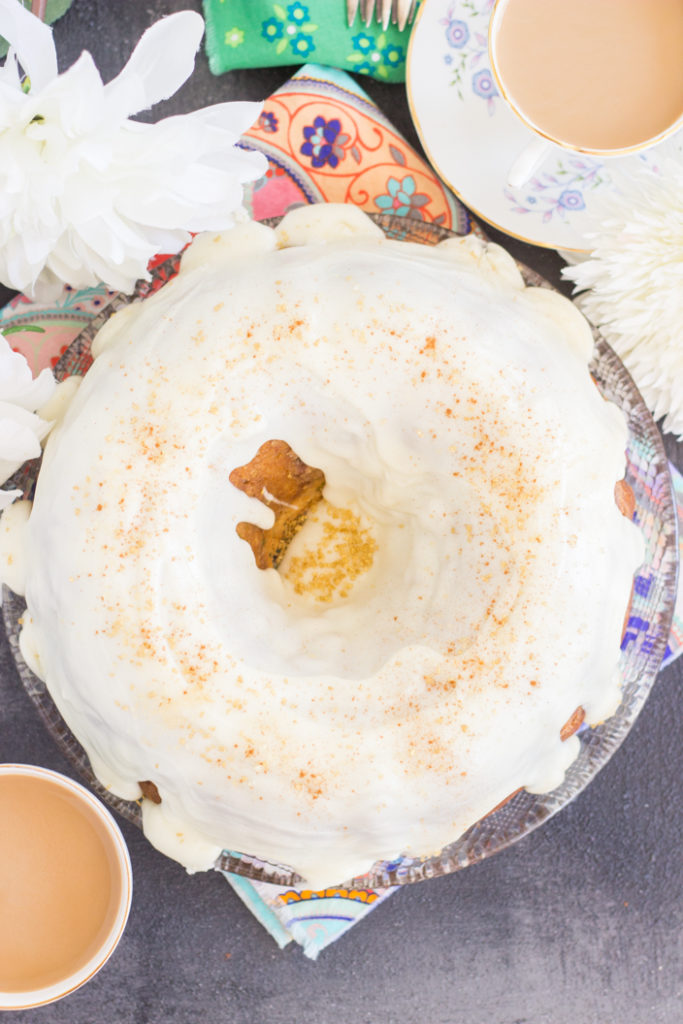 I do have some cake-like zucchini recipes, such as these Zucchini Bars with Brown Butter Frosting, and these Chocolate Chip Zucchini Bars — but they’re a bit like sheet cakes, they’re not truly zucchini cake.

Sure, sometimes the mood strikes for a super fluffy and soft cake, you know — traditional cake, while other times, a person might crave a richer, denser, more weighty cake. Perhaps something similar to a poundcake, but shapelier. Enter: the bundt. 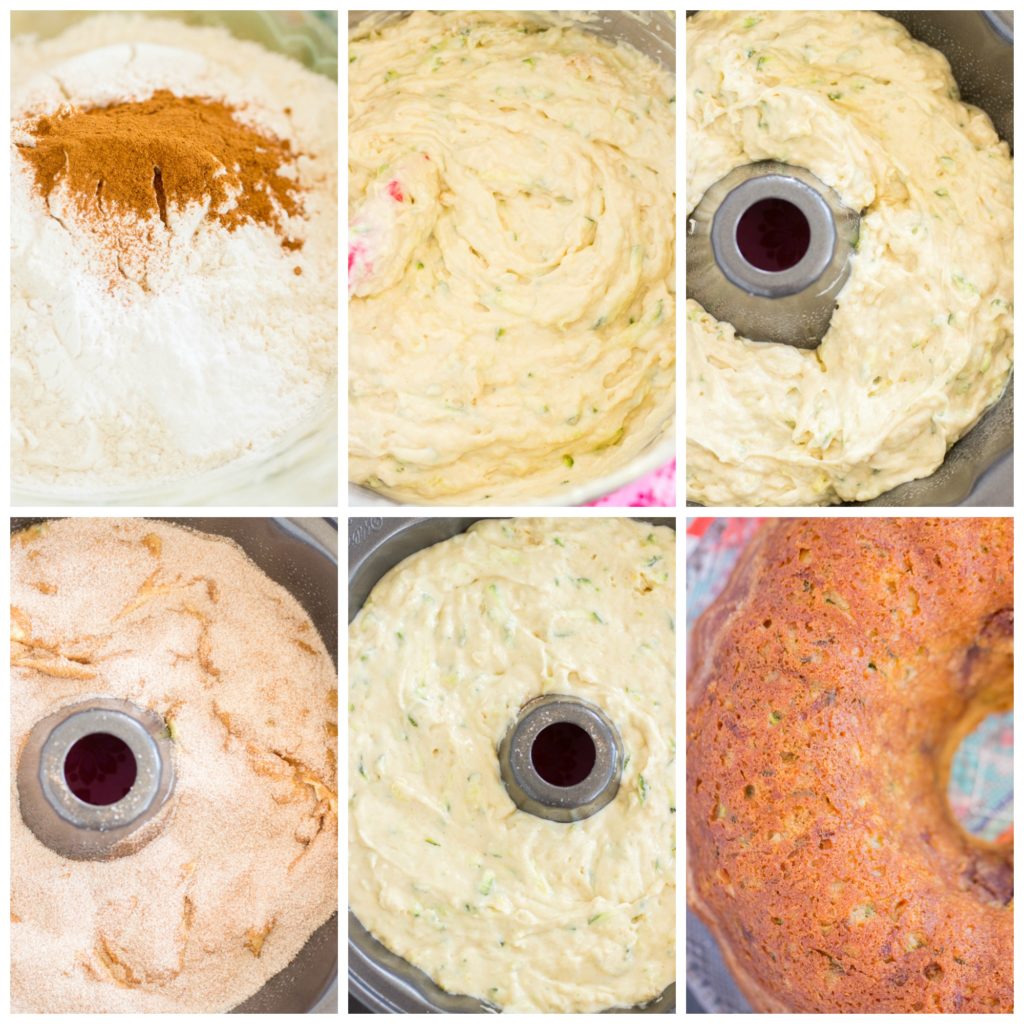 I’m just a big fan, and I’m surprised I hadn’t made a Zucchini Bundt Cake yet. I like their unique qualities in terms of texture, crumb, and moisture, as well as their beautiful appearance.

This Zucchini Cake recipe produces a rich, very buttery, almost poundcake-like bundt. It’s intensely moist and dense, but with soft crumbs and a truly luxurious texture. Also, besides your usual suspects: butter, eggs, sugar, vanilla, etc., the batter is infused with cream cheese too, which adds both flavor and the aforementioned luxuriousness. 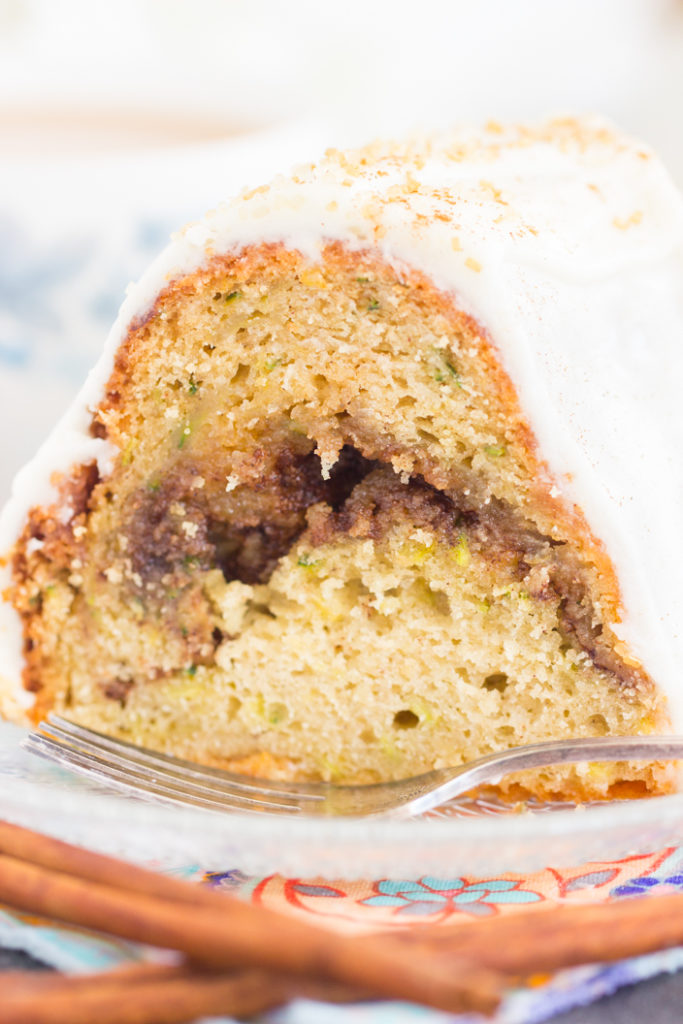 To actually look at it, this may not seem that special (I should have adorned it with flowers or some kind of pretty garnish to really perk it up aesthetically… oh well.), but I guarantee you will NOT be disappointed. 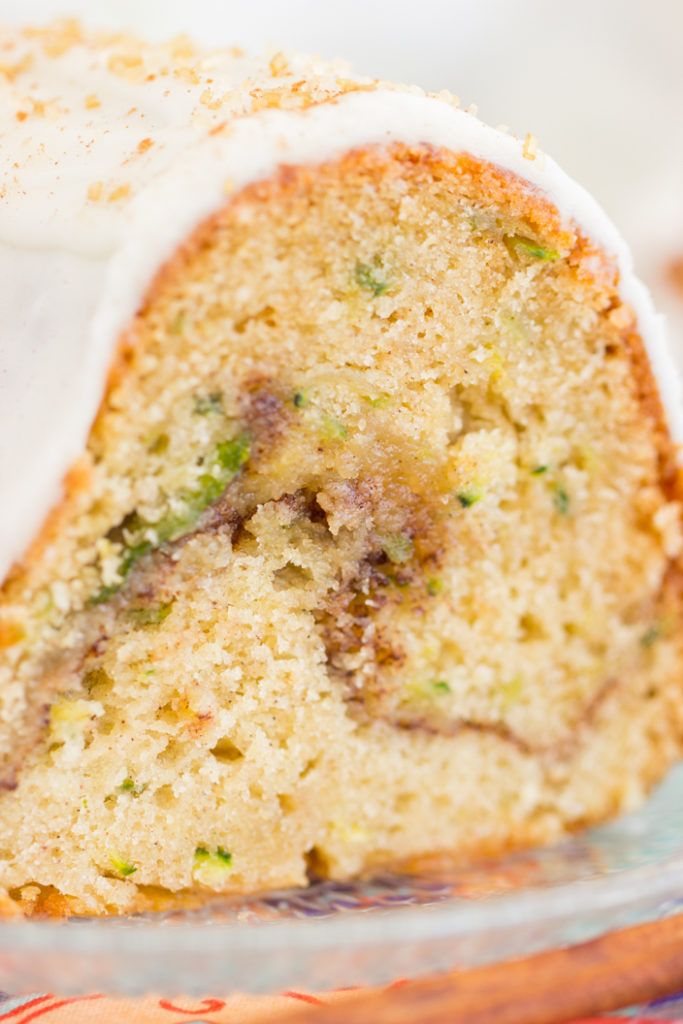 This Zucchini Cake is a zucchini recipe you’re going to come back to again and again, and you’ll actually be thrilled at the surplus of zucchini in your garden. Don’t make zoodles to use it up, make Zucchini Cake!

The bones of this Zucchini Bundt Cake recipe are straightforward and simple, and so I see a lot of future potential in this recipe for other flavors and variations! But hold tight for those sometime down the line.

The last few years, I’m having a real moment with zucchini. Summer’s pumpkin. I have now amassed a fabulous repository of zucchini recipes — 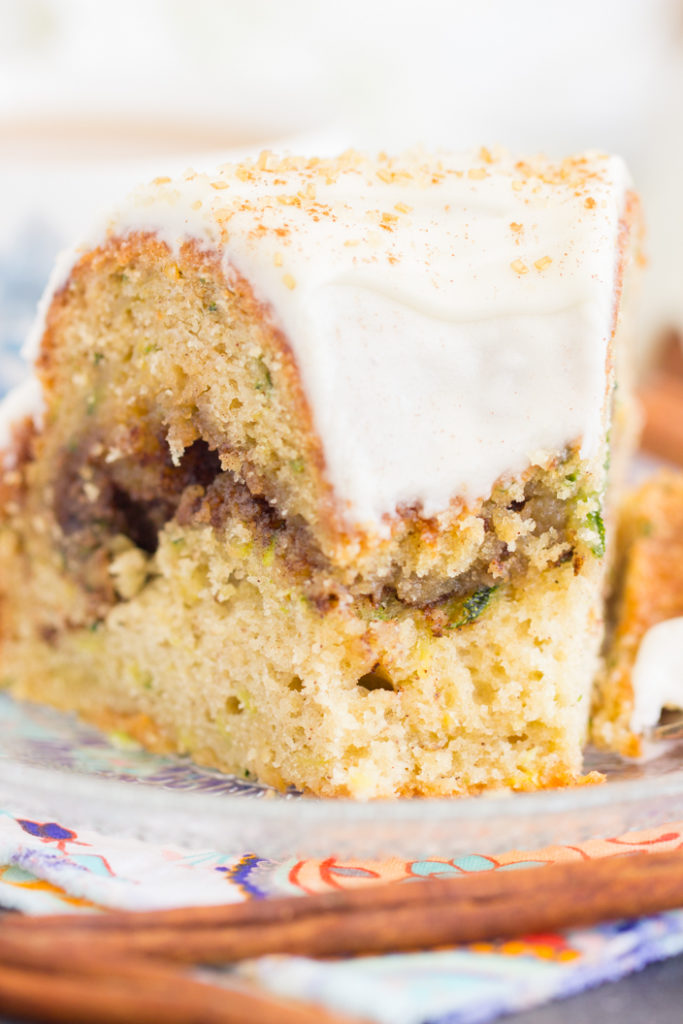 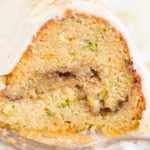 This Cinnamon-Streusel Zucchini Cake is rich and buttery like a poundcake, dense and moist, but with super soft crumb. Gads of zucchini provides crazy moisture, a thick ribbon of cinnamon-sugar swirls through the middle, and a drizzling of cream cheese glaze caps it off! This Cinnamon-Streusel Zucchini Cake is perfect for breakfast, brunch, or dessert too!

The cream cheese icing will lightly set and won't run off the cake, but it will not harden or firm, it will stay a bit soft. This is not an icing with a 'crust,' so to speak. I suggest storing the cake in the refrigerator for this reason, among others.

Best stored in the refrigerator, in a cake carrier or similar, sealed container. Good for up to a week in the fridge.

This cake, unglazed, freezes excellently. Wrap well, and freeze for up to 3 months. Defrost to room temperature, prepare glaze, adorn cake, and store in refrigerator thereafter.

Cake only adapted from If You Give a Blonde a Kitchen. 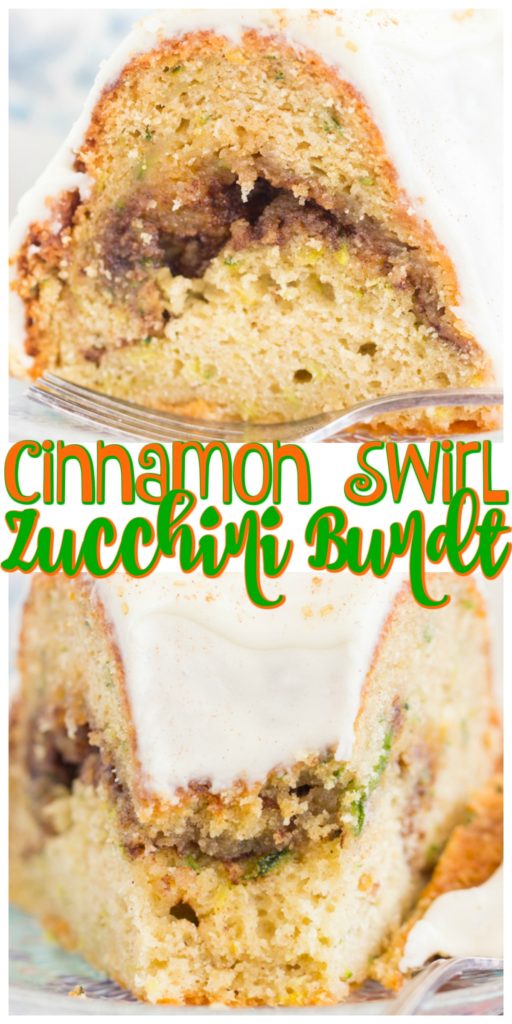 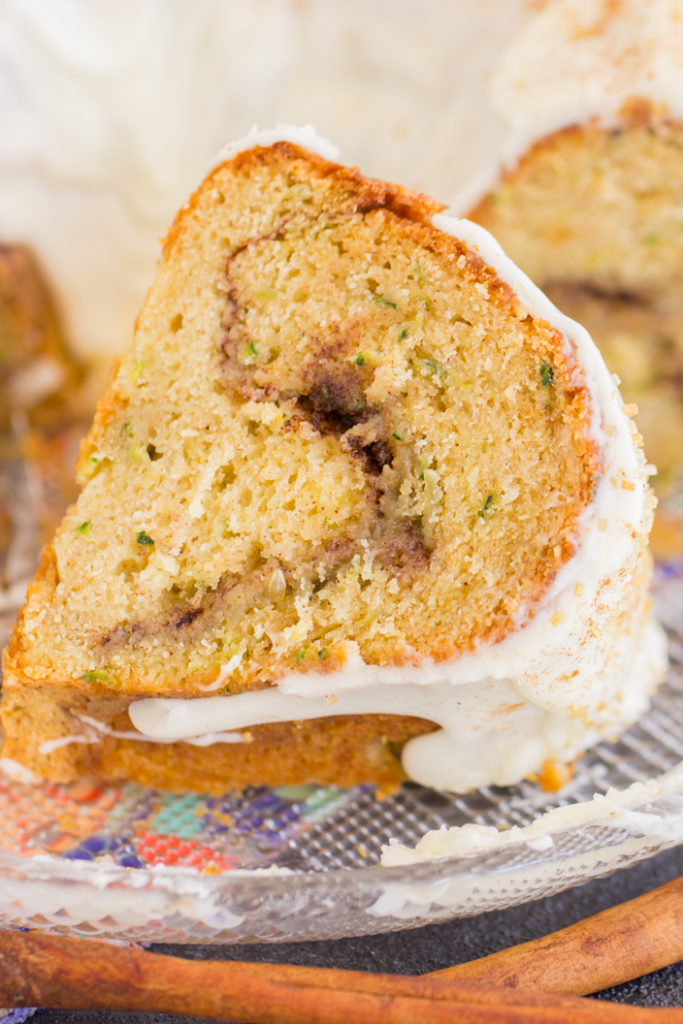