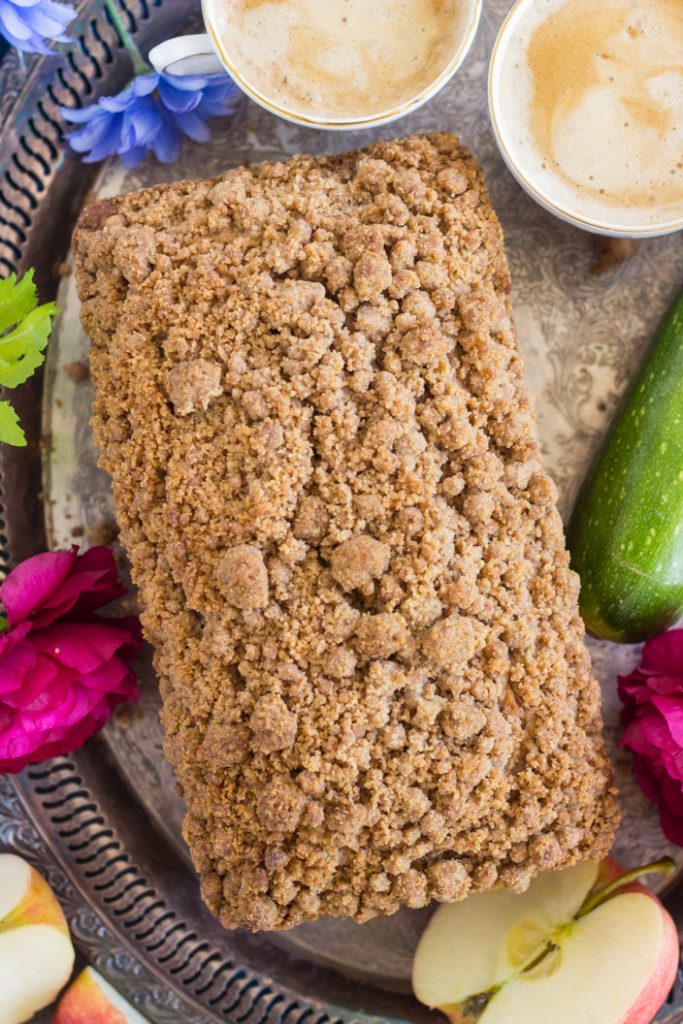 I was talking to a friend about this, and we both agreed that we don’t normally like apple when it’s incorporated into baked goods – except straight-up apple desserts like Apple Pie or Apple Crisp, but just adding chopped apples to breads, muffins, or the like…. I’m not usually into it at all. 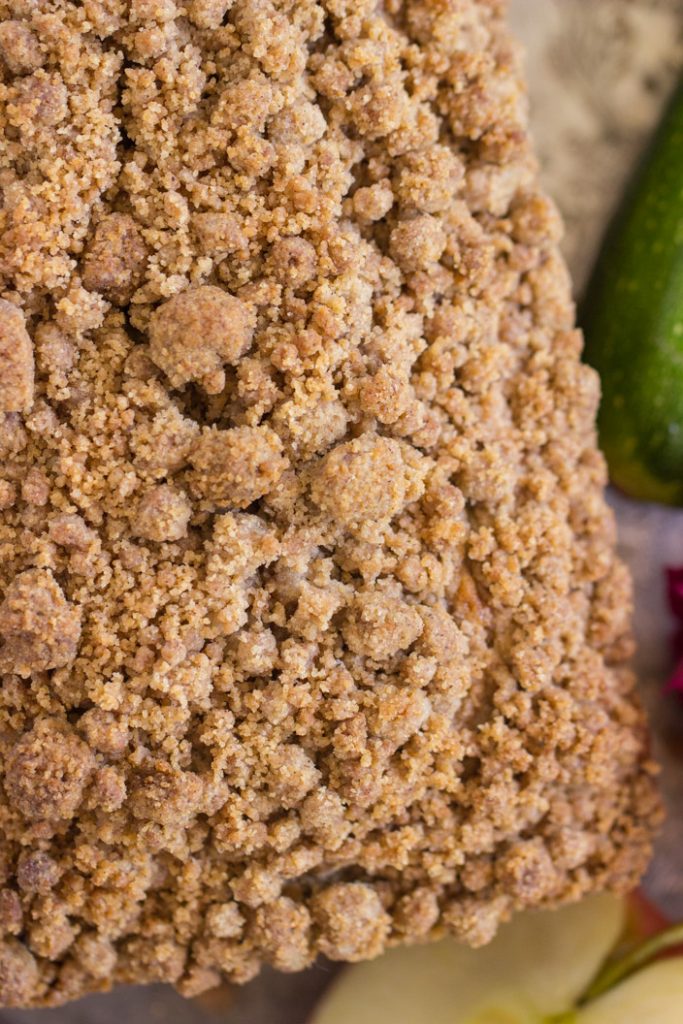 But this Streusel Apple Zucchini Bread is a HUGE exception. I don’t know what prompted me to make it in the first place, seeing as though I don’t like apple in that format, but I really wanted to make a new spin on zucchini bread, and I’d already exhausted the citrus route with this Lemon Blueberry Zucchini Bread and this Orange Zucchini Bread with Orange Glaze.

Come to think of it, I’d also exhausted banana as an option with this Zucchini Banana Bread with Streusel Topping. 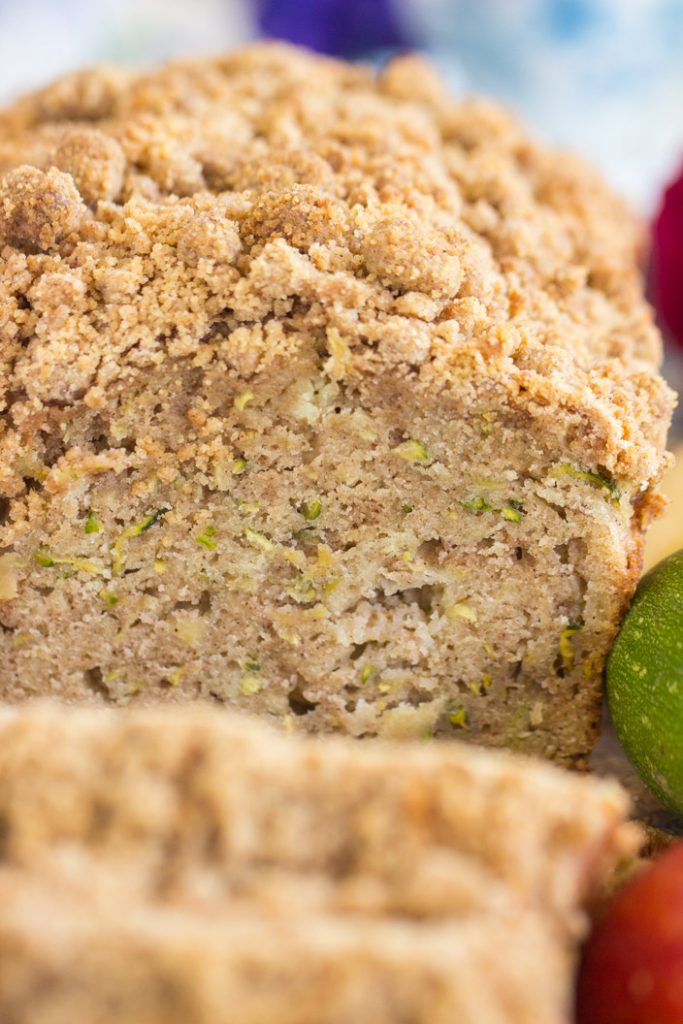 In any event, I thought I’d give apple another shot in baked goods. I went into this with a “we’ll just see what happens” attitude, but I was blown away by this Streusel Apple Zucchini Bread.

Surprisingly, of the 4-5 zucchini recipes I made this summer, this is actually my favorite! I don’t love it only because it happened to exceed low expectations. No. It’s just that damn delicious. But you don’t have to take my opinion only! 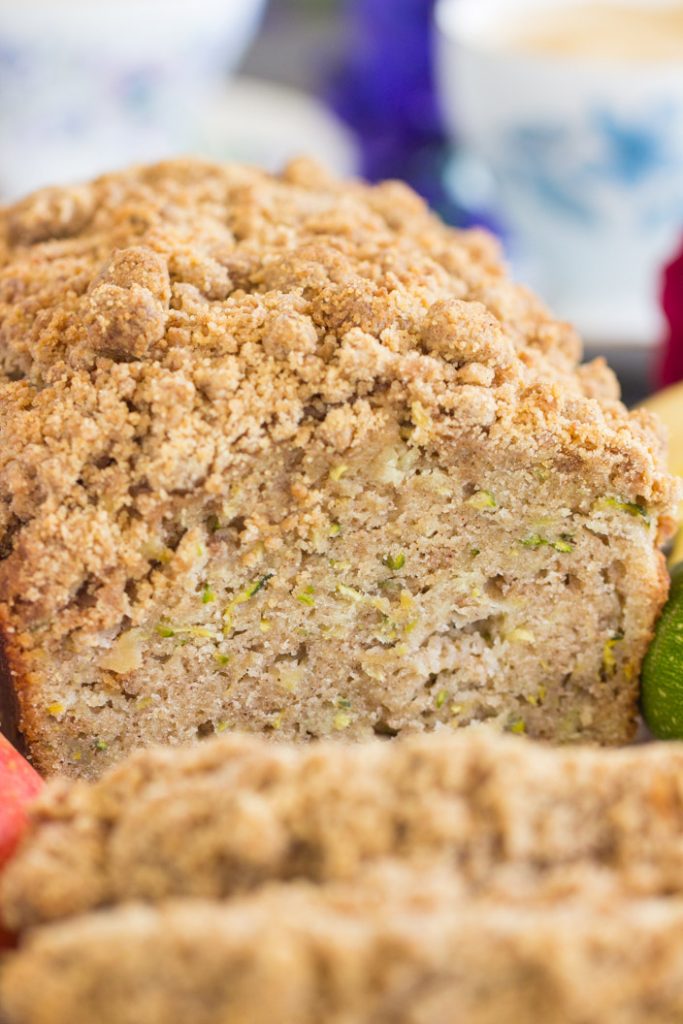 My S.O. agreed. He raved and raved. Every time he had a slice, he raved more. A little bit of this bread was shared at his workplace with colleagues too so we could have outside feedback, but we mostly ended up keeping this Streusel Apple Zucchini Bread all to ourselves, and I’m making another loaf this weekend because we were OBSESSED with it.

Hate that word — obsessed — but it completely fits in this case. 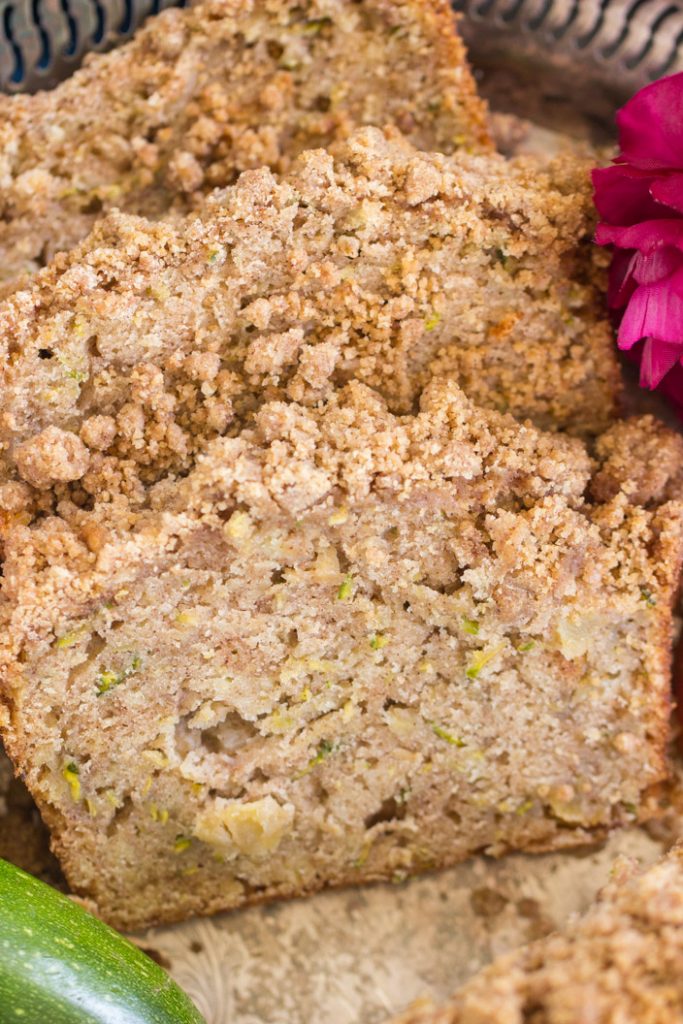 This is NOT an ordinary zucchini bread recipe, to be sure. This Streusel Apple Zucchini Bread is insanely, unbelievably moist. Not mushy, just ridiculously moist. But it’s also dense and hearty, while still not being heavy. Perfect crumb.

There’s only 1 large apple in this bread, but it really shines, certainly with the help of apple pie spice and cinnamon too. The apple definitely comes through pretty prominently, so the bread is distinctly apple-y. And the zucchini adds a touch of fresh flavor as well, while also not making this bread taste like a veggie. It just makes it crazy moist! 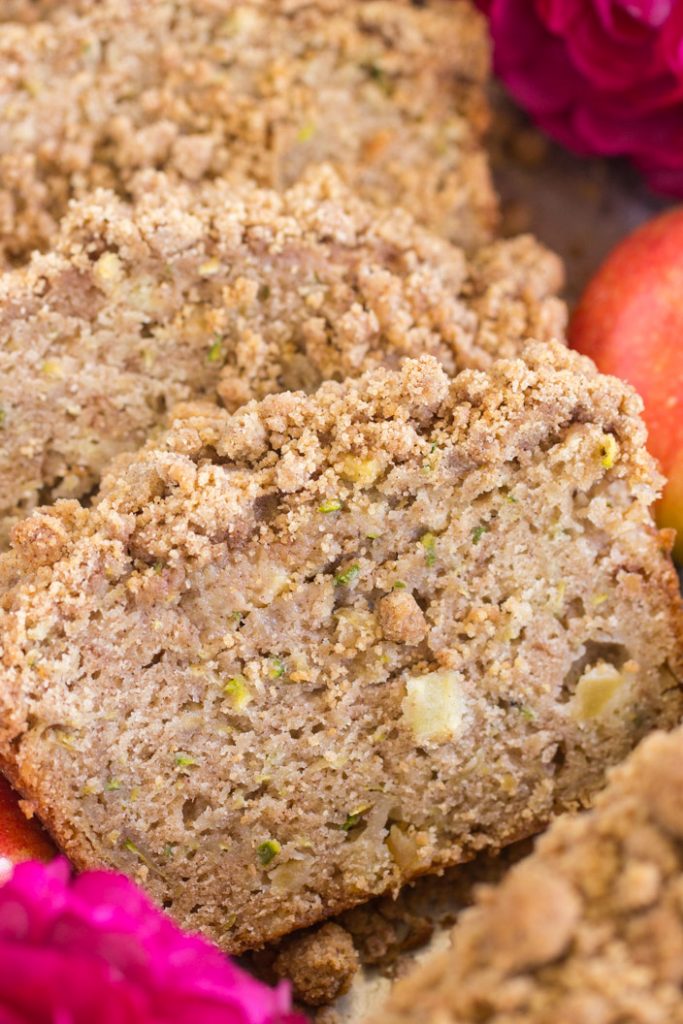 Besides the addictive texture and awesome flavor, this Streusel Apple Zucchini Bread is no ordinary zucchini bread also due to the streusel! Sometimes I wonder why I bother to make any sort of bread or muffins without streusel. Like, why?

Streusel is extra, but always worth it. This streusel is LOTS of brown sugar, LOTS of spice, and quite saturated with butter. Would you want it any other way? 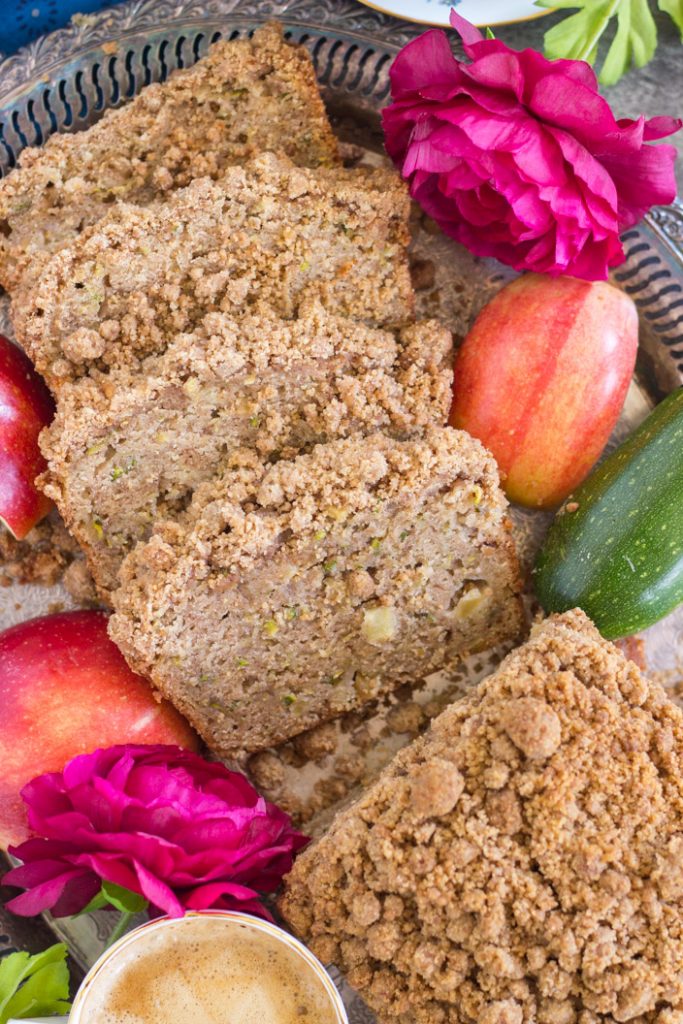 This Streusel Apple Zucchini Bread features a lot of apple flavor and spice, it’s moist, dense, and hearty, and it’s rather simple to whip up. Throw in a few cups of shredded zucchini too, and you get the bonus features of what zucchini does for baked goods.

Top it generously with sweet, crunchy, brown sugar streusel, and this is a recipe that will actually make you grateful that you’ve got zucchini coming out of your ears. 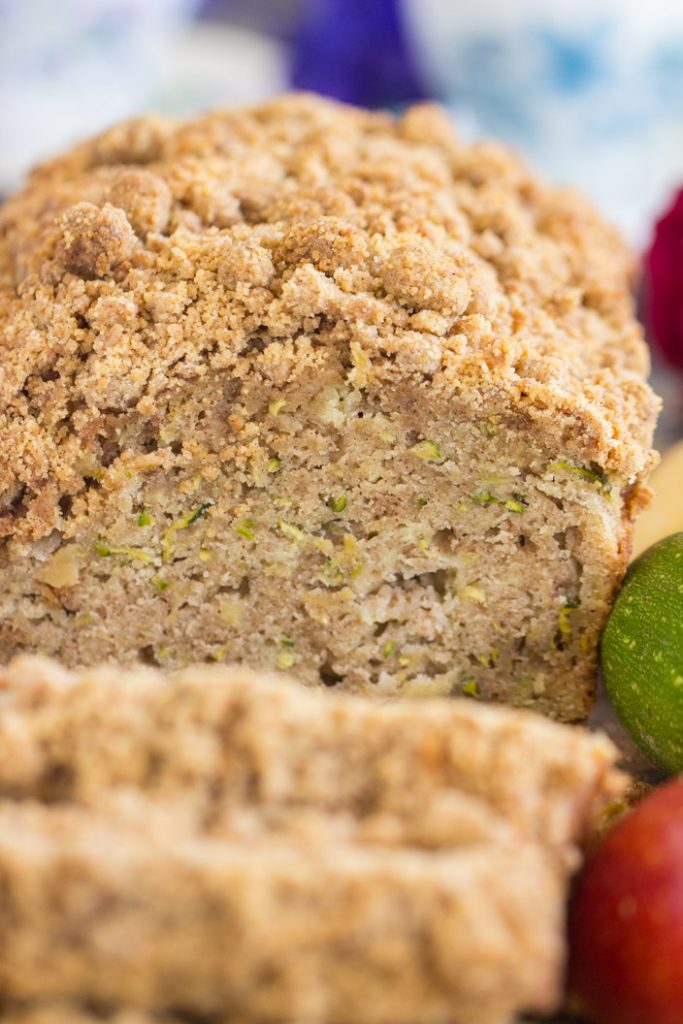 If you’re on the hunt for other zucchini recipes, perhaps brunch ones, I love this Chocolate Zucchini Coffee Cake. It’s like 4 inches tall, and it has a ribbon of chocolate streusel through the center and on top. These Blueberry Zucchini Bread Pancakes are the most gorgeous and tasty stack of pancakes you’ll ever experience.  These Lemon Zucchini Muffins with Lemon Glaze or Almond Blueberry Zucchini Muffins are terrific. Such moist, sweet, fluffy muffins.

For a traditional combo of chocolate and zucchini, these Oatmeal Chocolate Chip Zucchini Cookies can be made really fast start-to-finish, and feel so decadent. I also suggest these Chocolate Zucchini Muffins with Chocolate Chips. They’re lightened up, but don’t sacrifice flavor or texture at all. 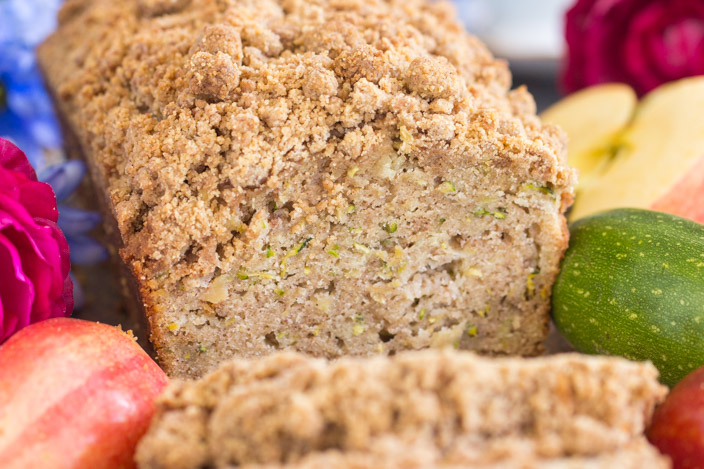 Looking for a savory zucchini recipe? This Parmesan Zucchini Cornbread is *the* cornbread of summer! You need it at your picnics and BBQs. And these Goat Cheese Zucchini Scones make the best egg sandwiches for breakfast.

What will you make first? What’s on your zucchini baking list this summer? 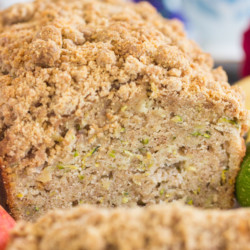