These Blueberry Zucchini Bread Pancakes are irresistible – a weekend brunch must! Tender and fluffy buttermilk pancakes, spiced with zucchini bread spices, and chock-full of fresh, plump blueberries. Grated zucchini adds moisture and a touch of sweetness! 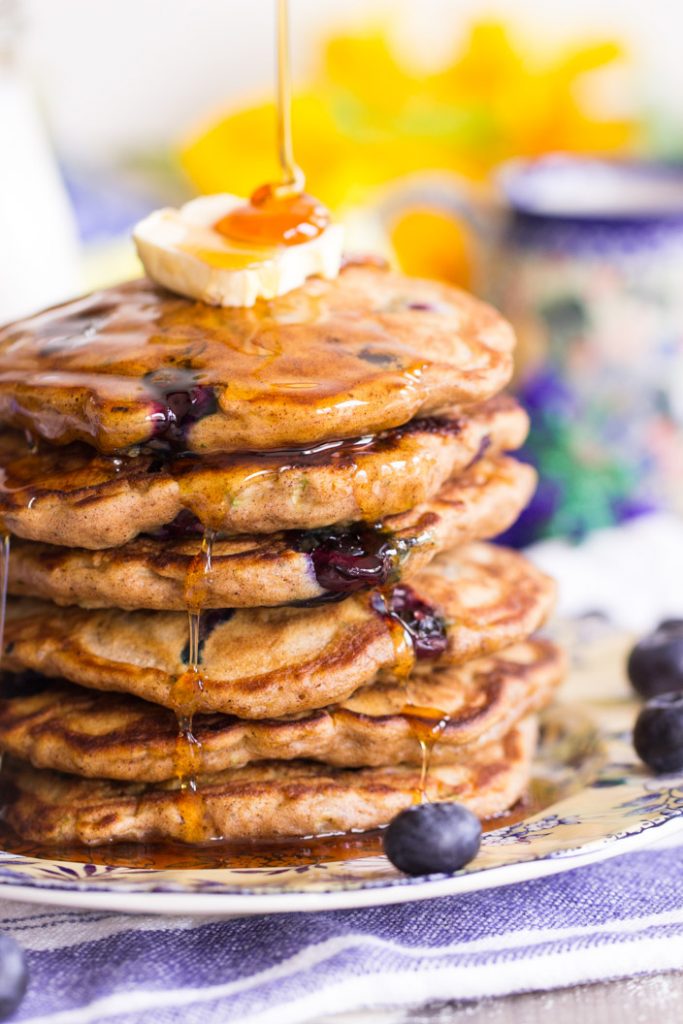 This September marks my fourth year of blogging. I can’t believe it! It’s really flown, and I *think* I’ve come a long way from my red-shirt year of blogging back in 2013. I never acknowledge or address blog-iversarys like other bloggers, and I think it’s because I like to forget the whole first year entirely. So many embarrassing photos and posts. Eek.

I beg you not to go back to anything from that first year…. unless it’s this No-Bake Peanut Butter Pie recipe. You need that recipe, and I’m okay with you seeing the state of my blog at that time. 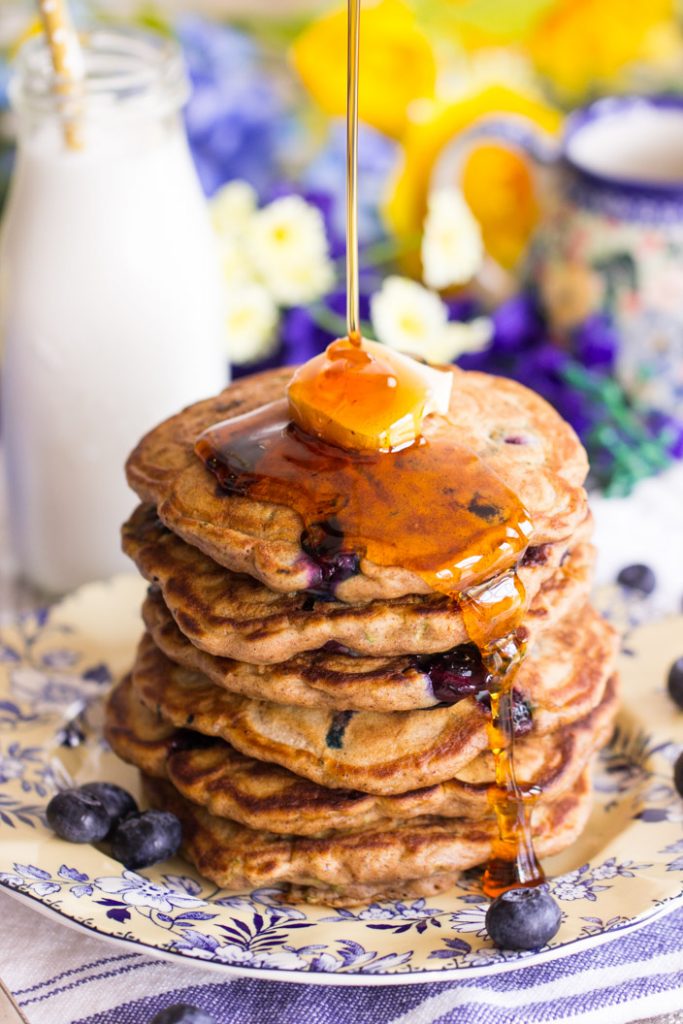 Anyway, my point in referencing a timeline is that in 4 years, I’ve only posted one recipe with zucchini. That’s pretty wild to me since I do a ton of baking with zucchini, and because those Chocolate Zucchini Muffins with Chocolate Chips are a regular staple in my house.

Although I love to use zucchini in sweet things and baked goods, I just assume those recipe posts won’t perform well because zucchini is not a sexy ingredient. (Btw, I hate using that word).

It’s not like Biscoff or Nutella or, like, chocolate. I mean, anything is more titillating than zucchini, right? 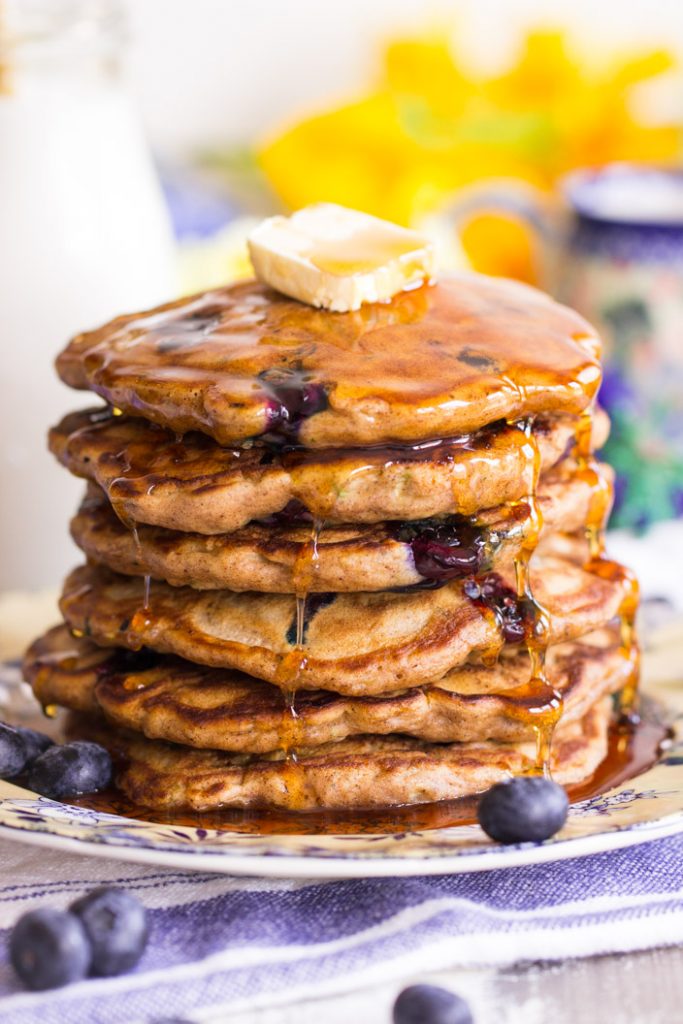 But my mother pointed out last summer that I needed to show more zucchini recipes because anyone that gardens always has zucchini coming out of their ears this time of year. She’s right. She had so much zucchini last summer and they were scrambling to figure out what to do with it all.

Also, zucchini rocks. Not on its own as a vegetable (IMO), but when crammed into baked goods such that you don’t even know it’s there, and it’s completely disguised, that’s when zucchini actually shines. Ha! 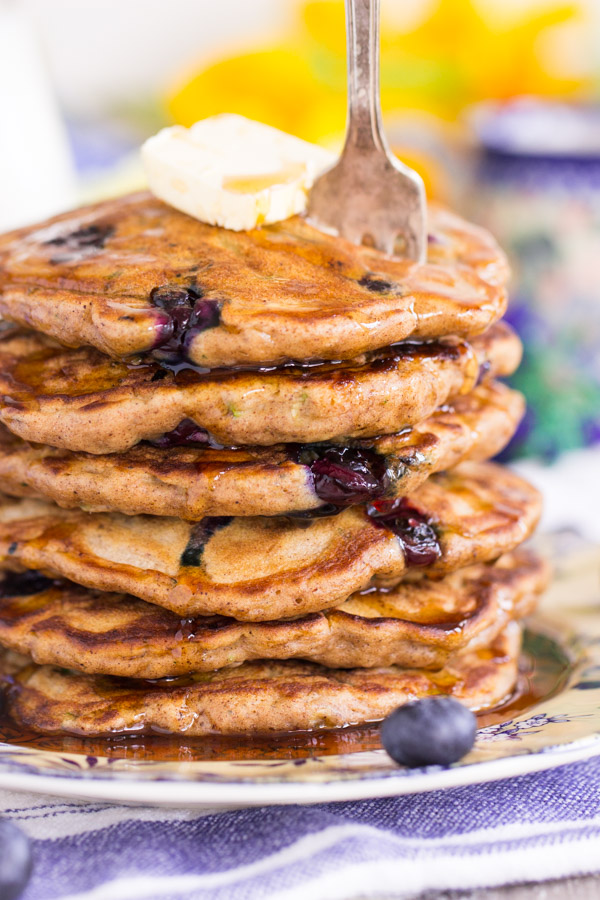 These Blueberry Zucchini Bread Pancakes are freakin’ incredible. The pancakes are tender and fluffy, not dense, flat, or bland, as sometimes pancake recipes can be. Not these, they are a seriously fluffy, soft, and tender pancake recipe. They’re a little bit springy in texture, and it’s such a good quality in a stack of pancakes to have a little spring.

If you get juicy and plump fresh blueberries, they’ll burst and sizzle as the pancakes cook on the griddle. That’s such a satisfying sound when you’re about to devour said pancakes. 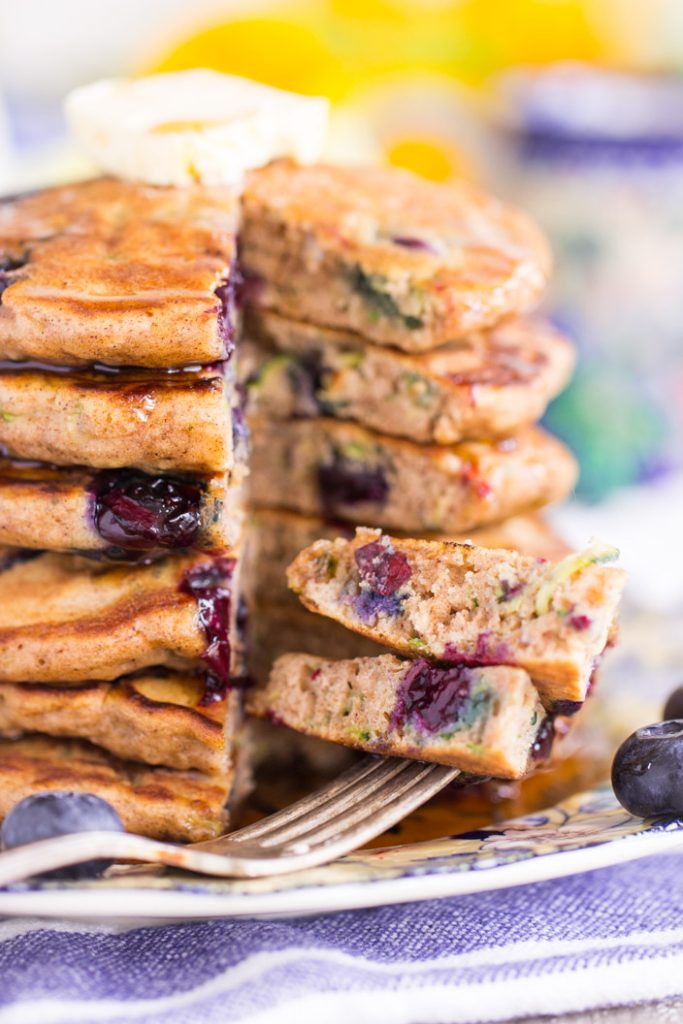 The zucchini… you don’t even know it’s there, of course, but what it does for these Blueberry Zucchini Bread Pancakes is two key things: moisture and sweetness. Hey, zucchini keeps baked goods moist. It’s a glorious thing. Hence, millions of zucchini bread recipes in the world!

But how do they also add sweetness? I have no idea, but they do. It’s subtle, but so nice. These pancakes were just the right amount of sweet. As much as I’m a dessert fanatic, I don’t need a sugar overdose at breakfast, but these were a perfect balance. You almost don’t need maple syrup. 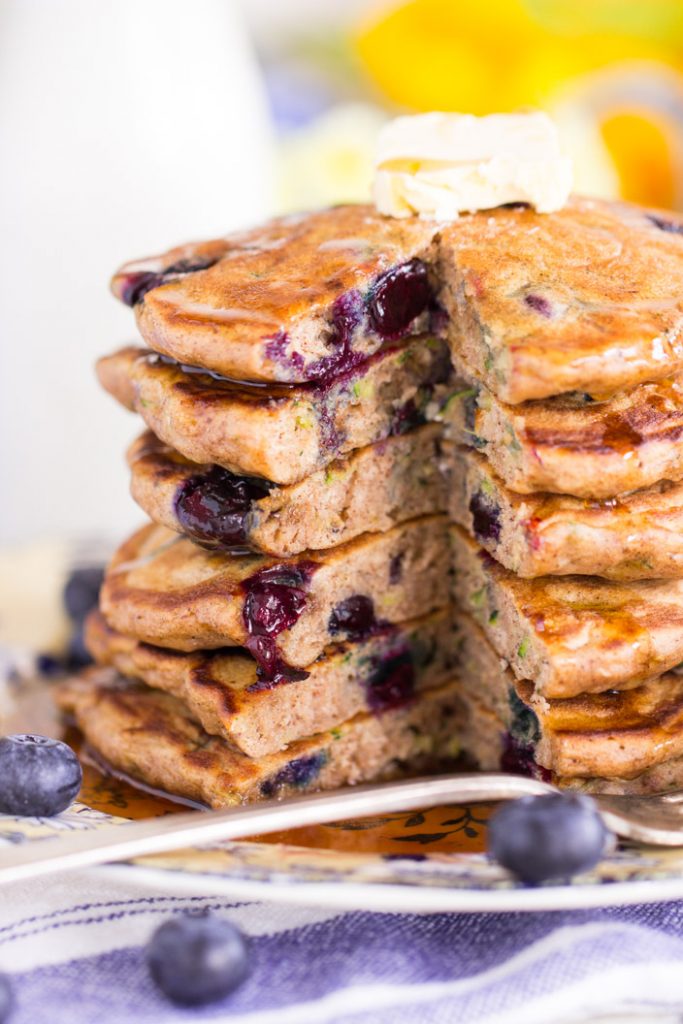 The spices are also super important, and partly what makes these Blueberry Zucchini Bread Pancakes… a little nutmeg and a lot of cinnamon go a long way in creating all those classic zucchini bread vibes.

I made these, loved them, made them again, and made them again. I froze a bunch (they freeze wonderfully), and now we pull out a small package of 4 on the weekends. They reheat in the toaster oven like a champ!

I have like 3 more zucchini recipes for you that I’ll spread throughout the summer, so I’ve redeemed myself for posting only 1 in four years. 🙂 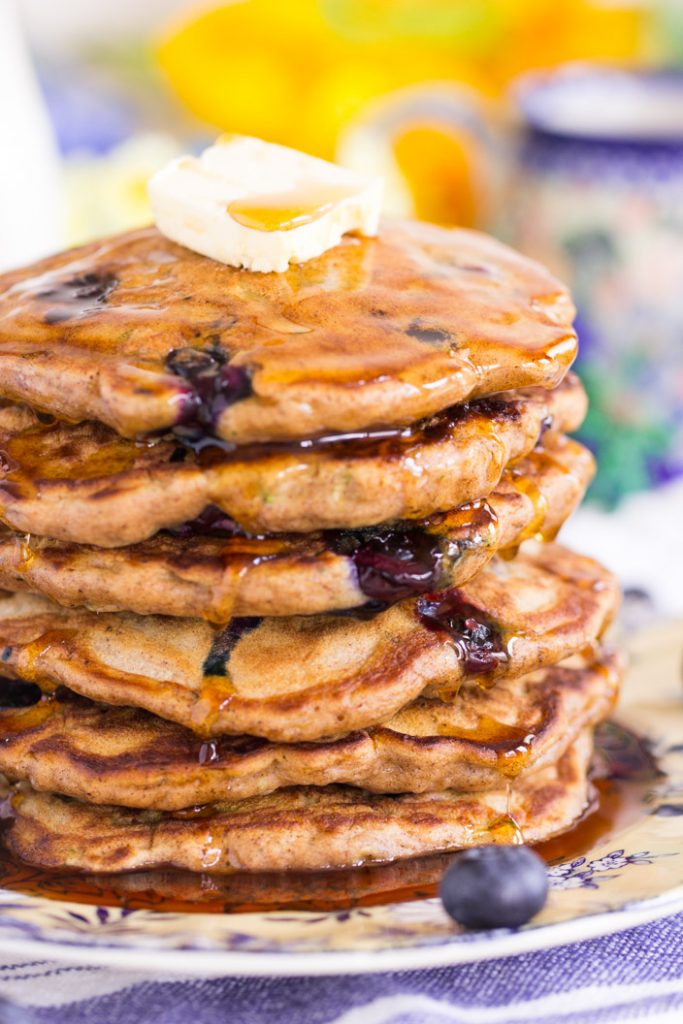 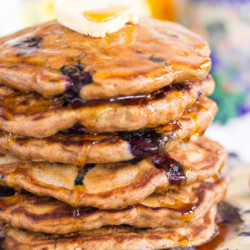 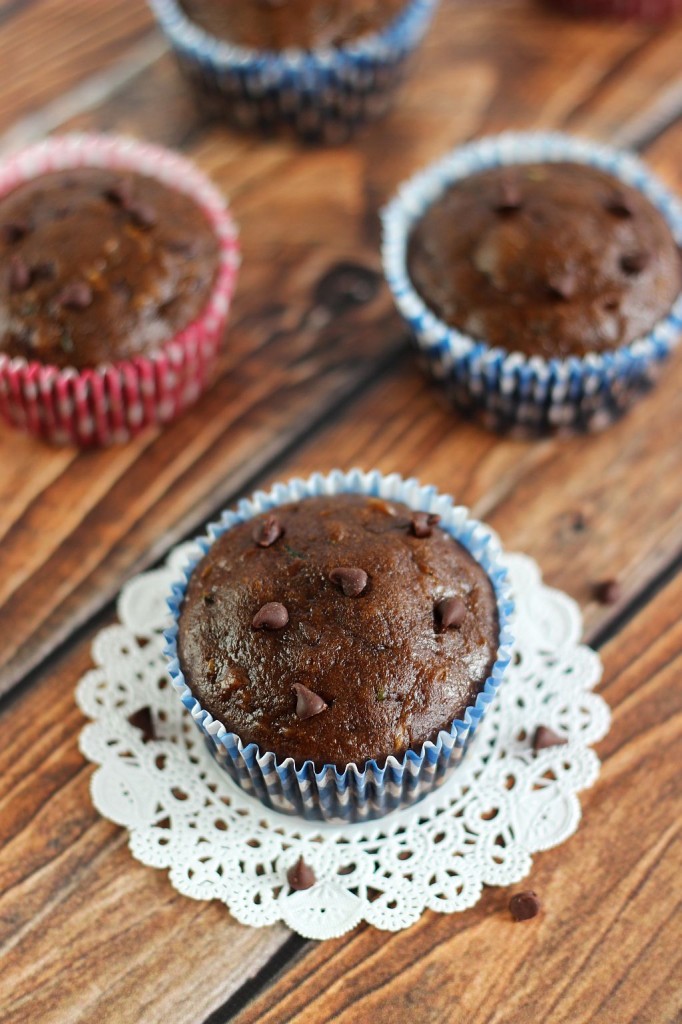 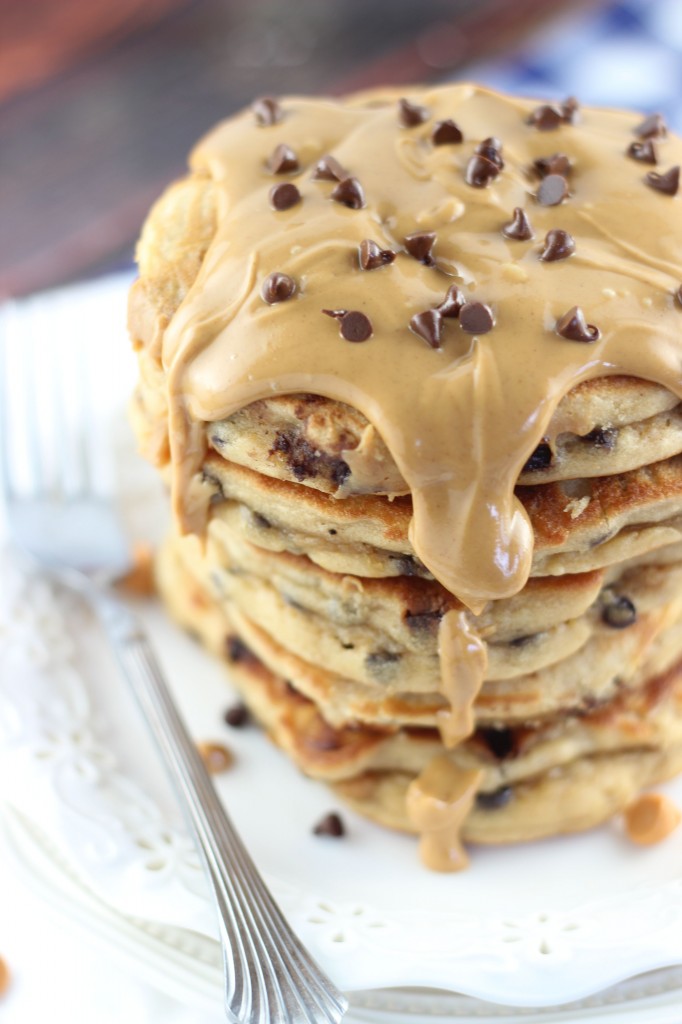 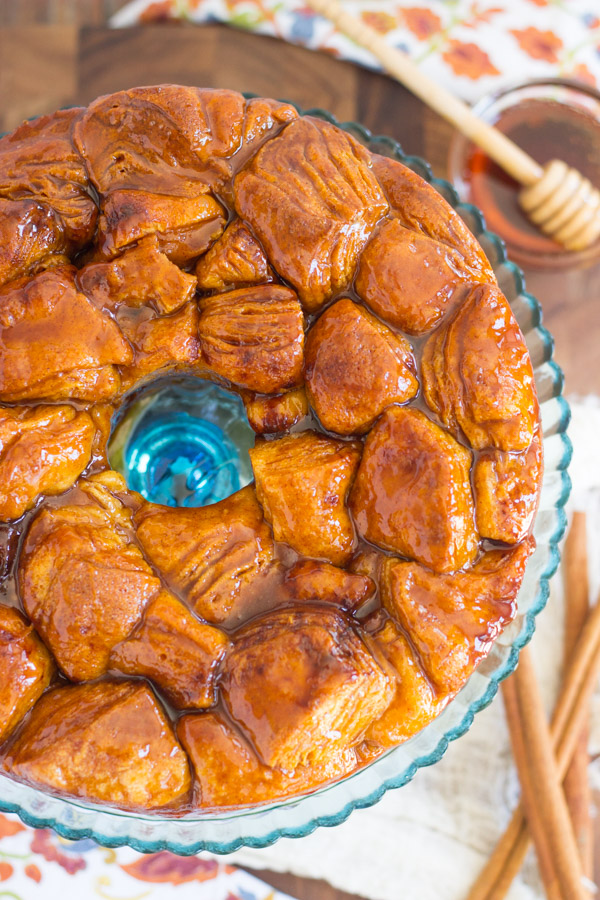 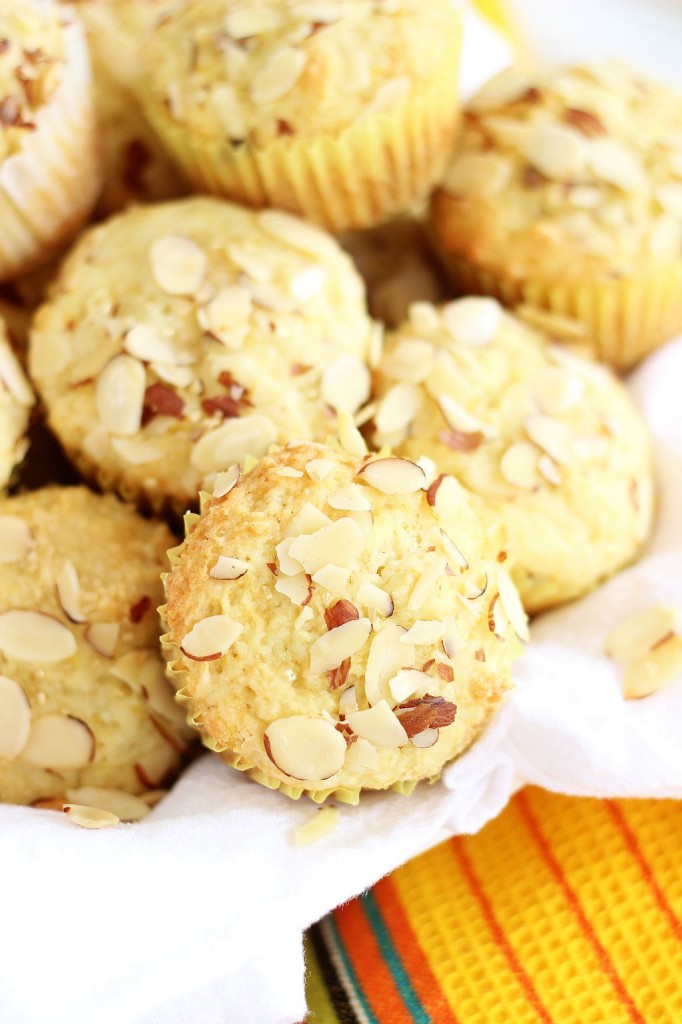