Can’t believe I never thought to do this before, but we’re doing it now: pumpkin and zucchini, TOGETHER! A lightbulb went off this year, and it’s about time I had that lightbulb moment. We definitely needed to combine these best veggies, and the first product of this new partnership is this Pumpkin Zucchini Bread.

Botanically, both pumpkin and zucchini are fruits, I guess, but whatever. 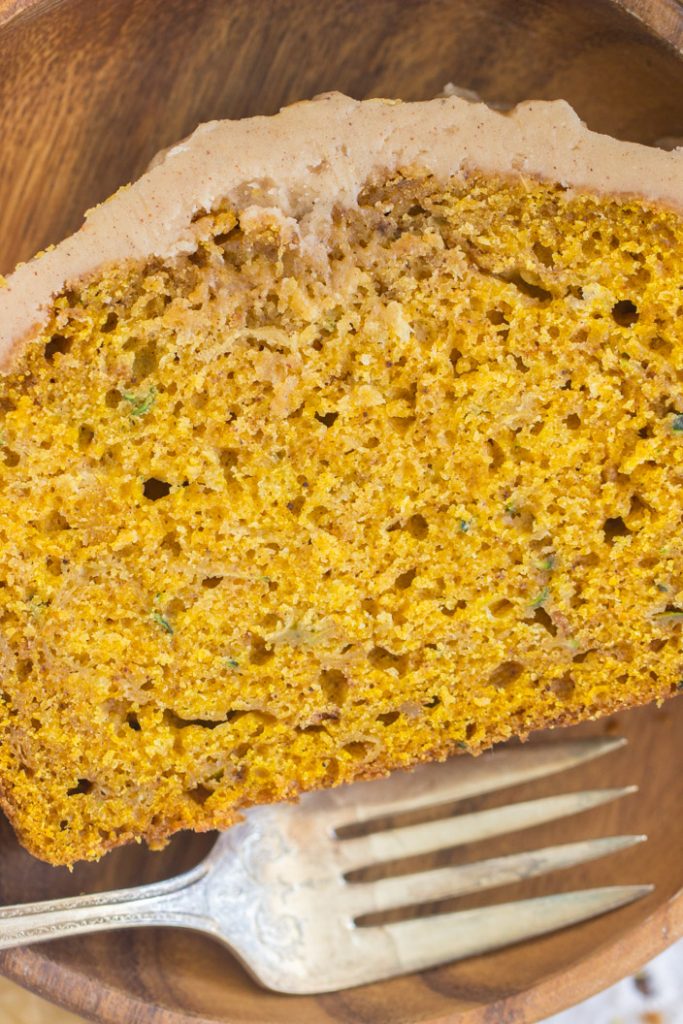 In the interest of full disclosure, I might’ve combined pumpkin and zucchini in at least two other upcoming recipes, so I hope you’re down for this combo. You should be — it’s quite fab!

I’ve become infatuated with zucchini the last few summers. I’ve always liked zucchini in baked goods, but it’s on another level the last few years. Zucchini is like the pumpkin of summer to me. 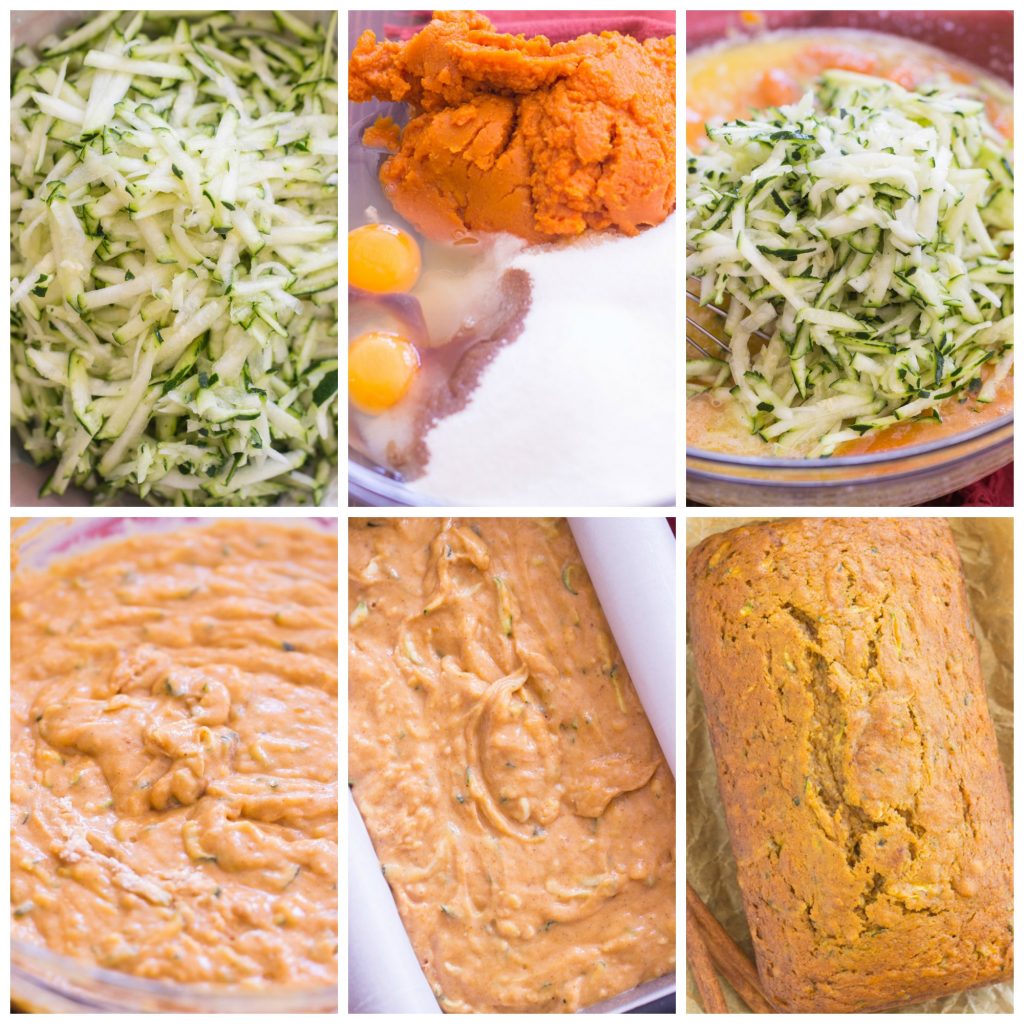 All I want during the fall is pumpkin stuff. And now, all I want all summer is zucchini stuff. Well, and no bake pies too. I’m really into simple pie recipes during the summer.

This Pumpkin Zucchini Bread is super special for a host of reasons. Let’s discuss. 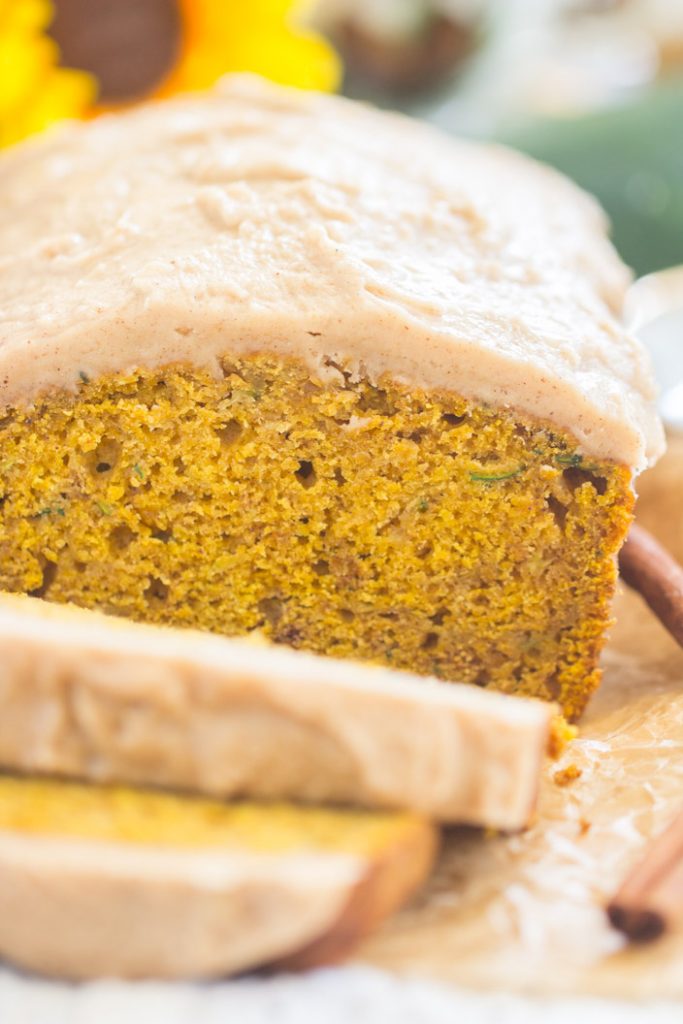 It may actually be easier to start with the icing than the bread. I’ve gone on and on about brown butter over the years, and it is one of the best food discoveries of my entire life. I adore brown butter, and it makes everything better. It’s a magical substance. It’s particularly amazing in icings and frostings where it can really stand out and shine. 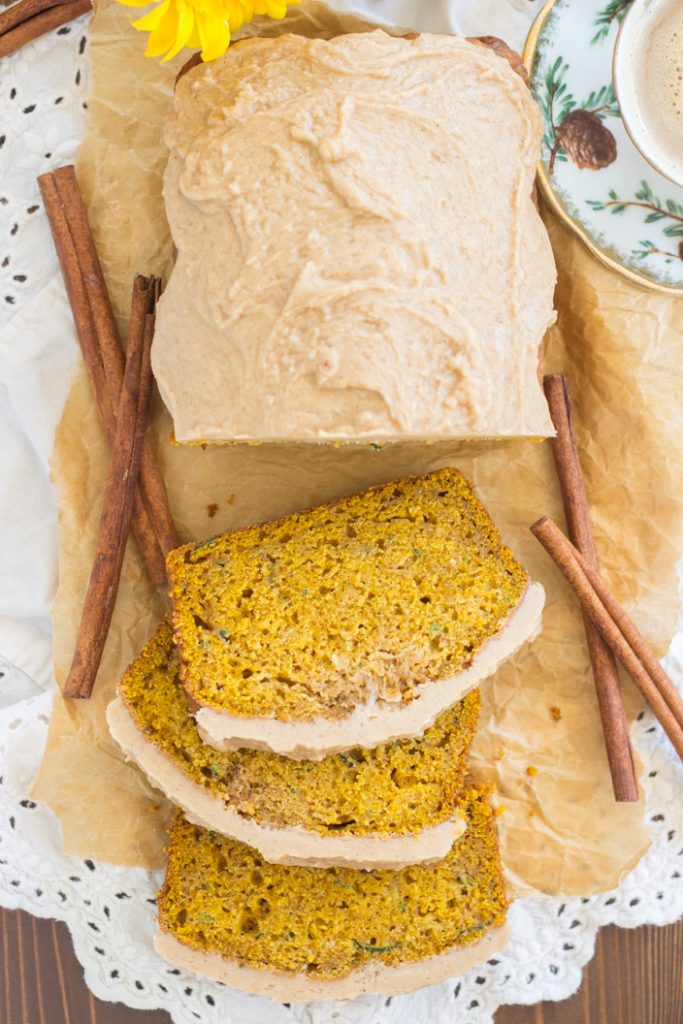 For example, these Pumpkin Cookies with Brown Butter Icing are epic. The icing is a huge reason for that. This Brown Butter Frosting recipe is thicker and more like a buttercream, and is transformative to anything it touches. A standard cake mix cupcake will knock your socks off if you top it with that brown butter frosting. I’ve also used it on these Zucchini Bars and these Gingerbread Latte Cupcakes, among other things. 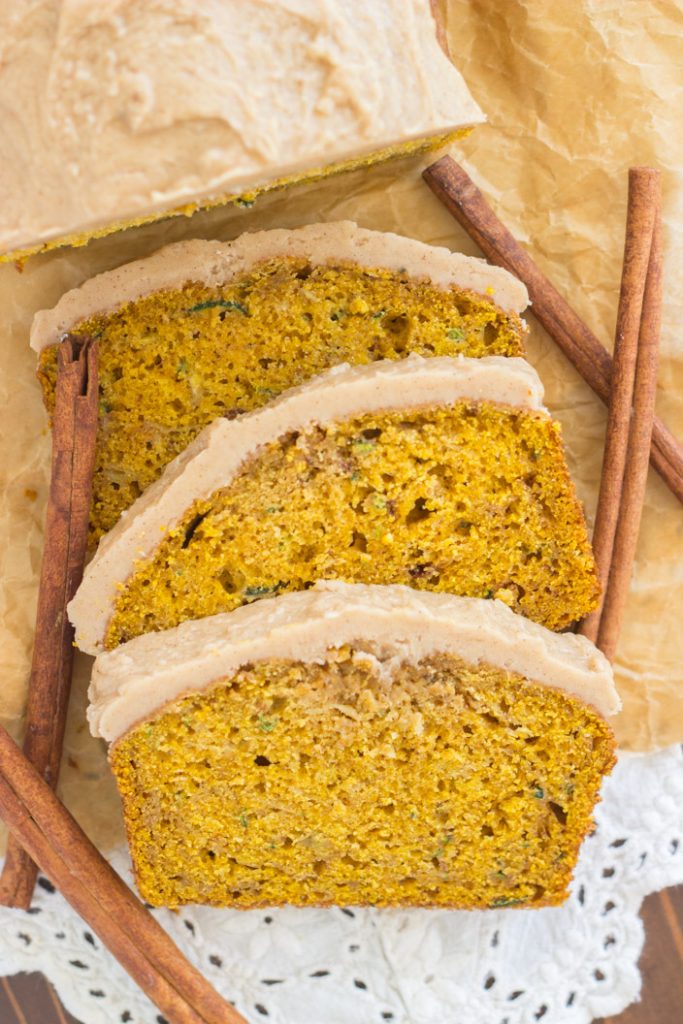 The bread…. there’d be a few ways to arrive at this Pumpkin Zucchini Bread. You’d probably first think to tweak a classic zucchini bread recipe to include pumpkin, or vice-versa, but I took a more round-about approach. 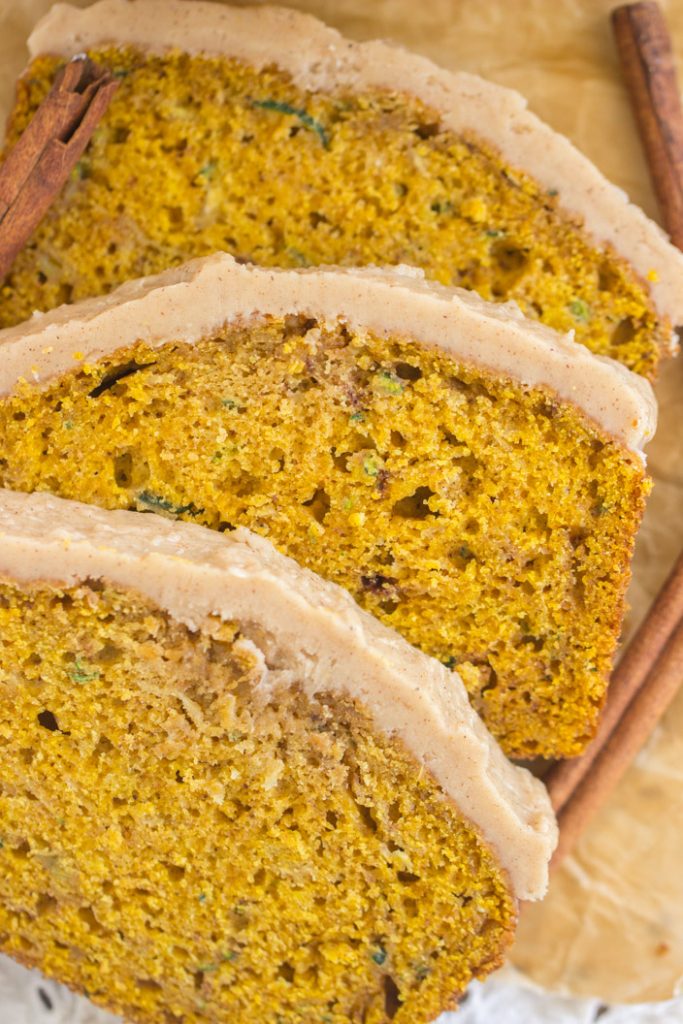 I actually started with my favorite Banana Bread recipe, one of the longest-standing, most tried-and-true recipes in my arsenal, tweaked it into Zucchini Banana Bread first, and then from there, eighty-sixed the banana altogether, added pumpkin instead, and here we are.

If you love pumpkin bread separately, and you love zucchini bread separately, this Pumpkin Zucchini Bread is a natural jump. It’s a perfect mash-up. It’s the best of both worlds, and it isn’t just a gimmick. I’m not forcing these two ingredients together. Pumpkin and zucchini mesh beautifully. 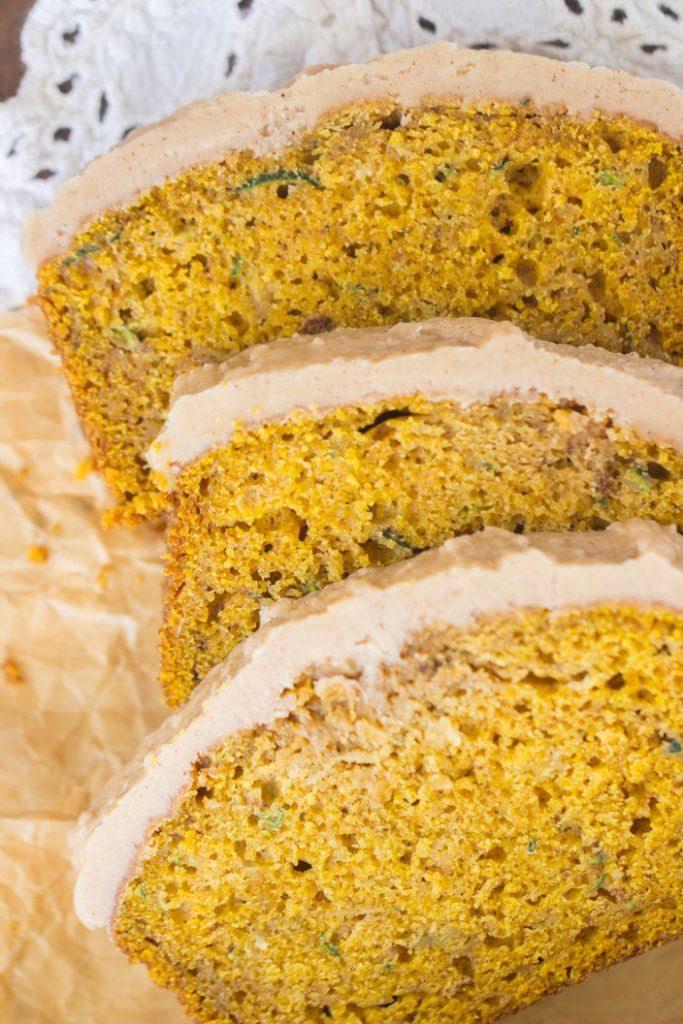 Pumpkin is slightly more prominent in this recipe, but the essence of zucchini is still there too. The zucchini adds very subtle flavor, a touch of sweetness, and extra moisture. They’re extremely complementary.

With the right spices to enhance them, both pumpkin and zucchini show up to the party and make their presence known. Besides delightful flavor, this Pumpkin Zucchini Bread is insanely moist. It’s hearty and substantial, but not heavy or weighed down. Dense, but soft. I really mean it when I tell you that it’s an instant classic, a recipe I’ll make every fall now. 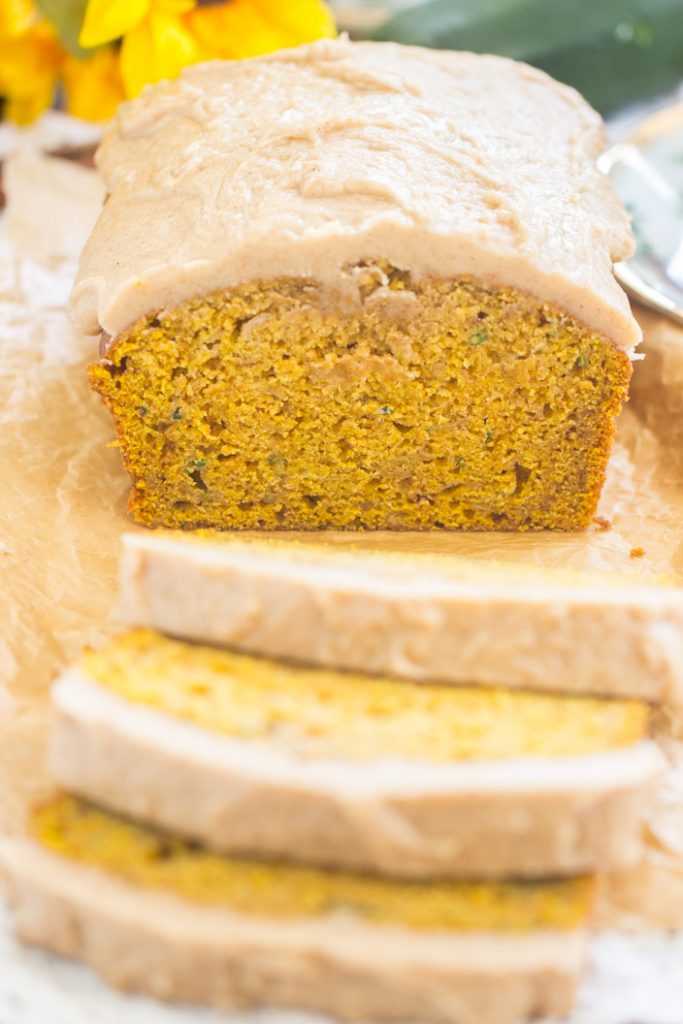 So will you be putting this Pumpkin Zucchini Bread with Brown Butter Icing on your fall baking list?? Give it a shot, and let me know what you think.

If you’re still on a zucchini kick into fall, here are 12 of my most favorite, very best zucchini recipes. It’s a little outdated and doesn’t include some recent recipes, like this unbelievable Streusel Apple Zucchini Bread… my favorite zucchini recipe this year, hands down. Also new this year were these Oatmeal Raisin Zucchini Cookies. YUM.

Other standouts are this Lemon Blueberry Zucchini Bread, and this Orange Zucchini Bread with Orange Glaze. Both have many positive reviews and high marks from readers.

Looking for more options for pumpkin bread-type things? These Pumpkin Apple Streusel Muffins are delightful, these Snickerdoodle Pumpkin Nutella Muffins are totally addictive, and these Streusel-Topped Pumpkin Pecan Scones blow Starbucks scones out of the water! 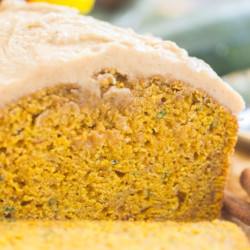