This simple Banana Cake recipe has only the most basic pantry staples as ingredients (plus bananas!). It boasts seriously intense banana flavor, yet it’s not dense or weighty like banana bread. Nope, my Banana Cake is moist, fluffy, and tender. Brown Butter Icing, made with nutty, fragrant, toasty, rich brown butter, complements this cake with an irresistible caramel-like wonderfulness. 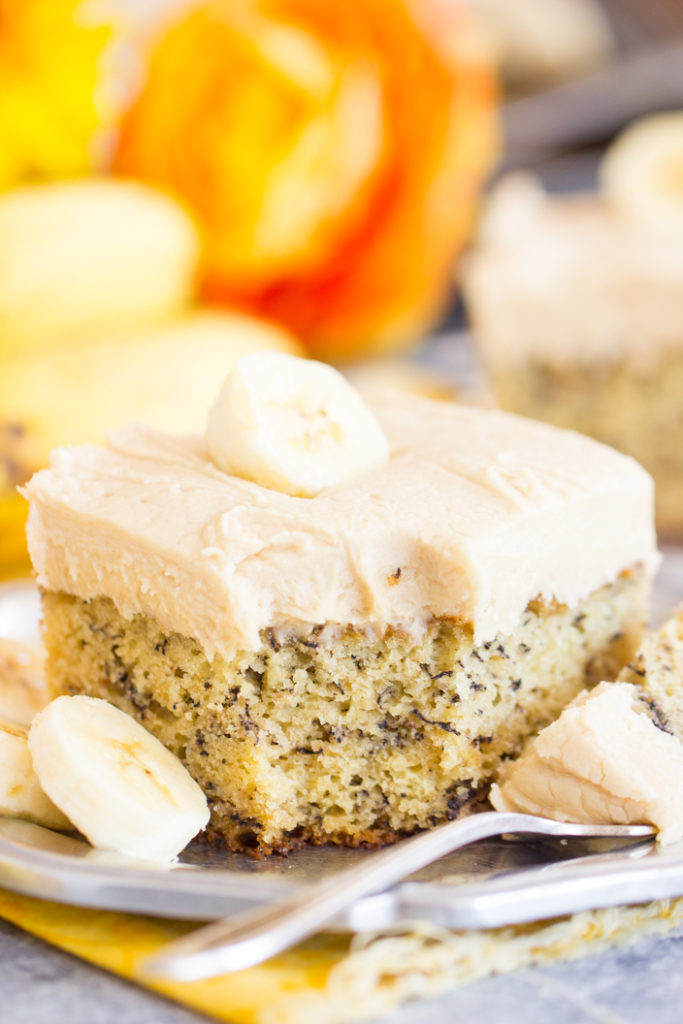 Good morning! How is everyone hanging in there? What happened to April? The whole month was a complete blur. Even though April felt like one of the longest months of my life — I’m sure it felt like that for many of us — it also feels like it never even happened. Every day was the same, and it all runs together.

I think we’re still going to be home a lot, even as things begin to open up. So I hope it’s not too late to share a banana recipe, seeing as though an obligatory activity in quarantine is apparently making Banana Bread! But switch it up — how about Banana Cake?? 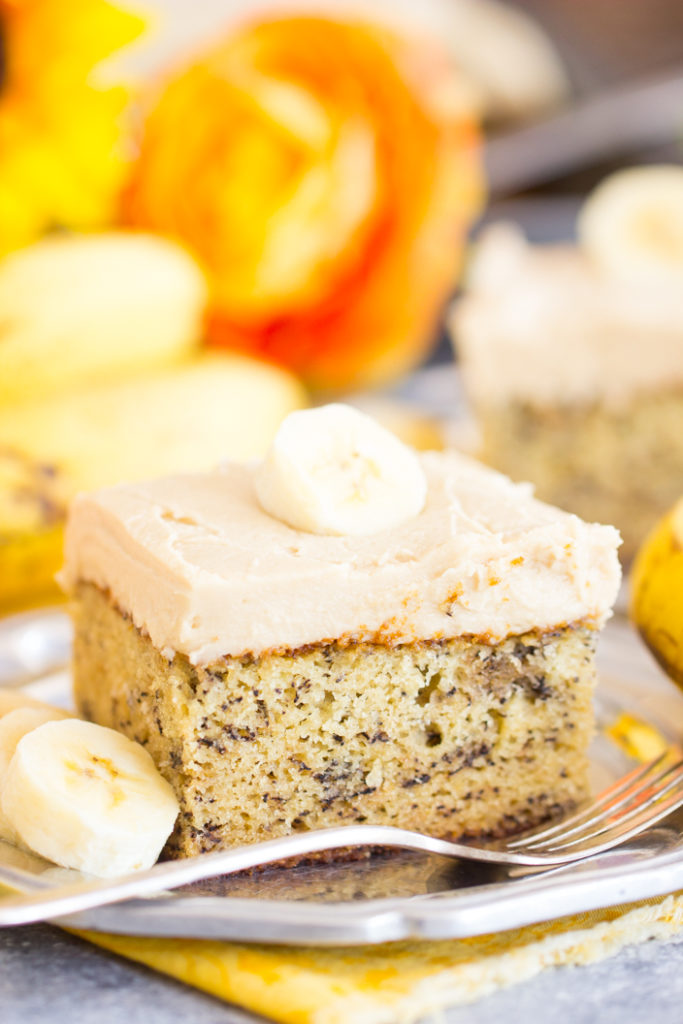 I have done soooo much baking. We’re getting outside as much as possible… bike rides, walks, lounging in our 5-foot inflatable pool from Amazon ($23!). However, if I’m not outdoors, or working my day job, I’m baking.

As much as I can, I’m making things that only require pantry staples. 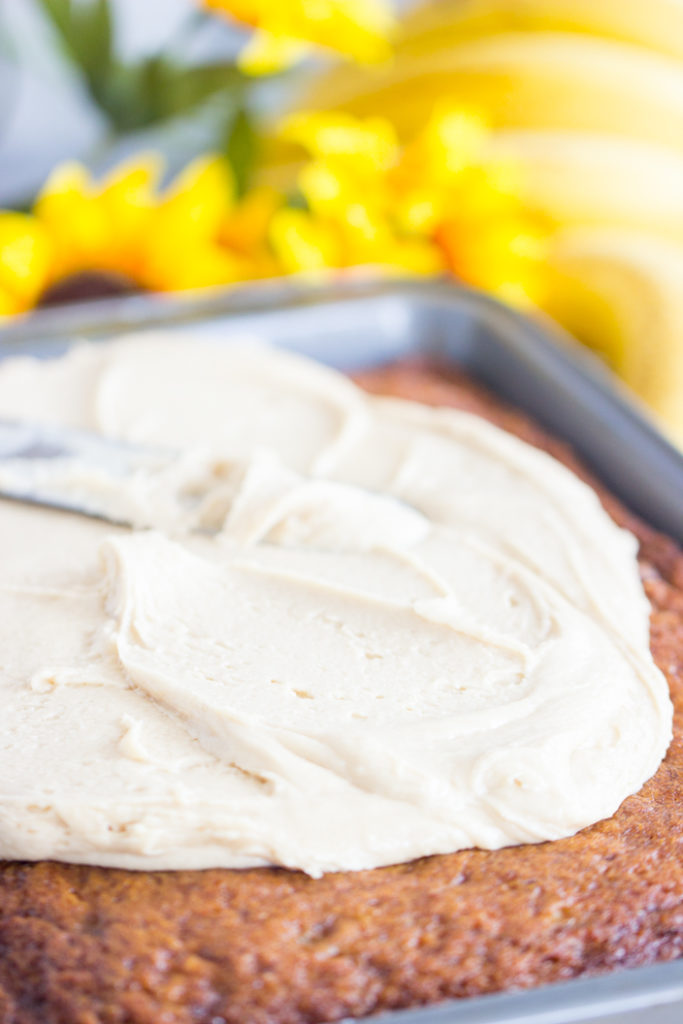 I have yet to see a banana shortage in stores. What about you? If anything, I experience shortages in my own house, but that’s about it. 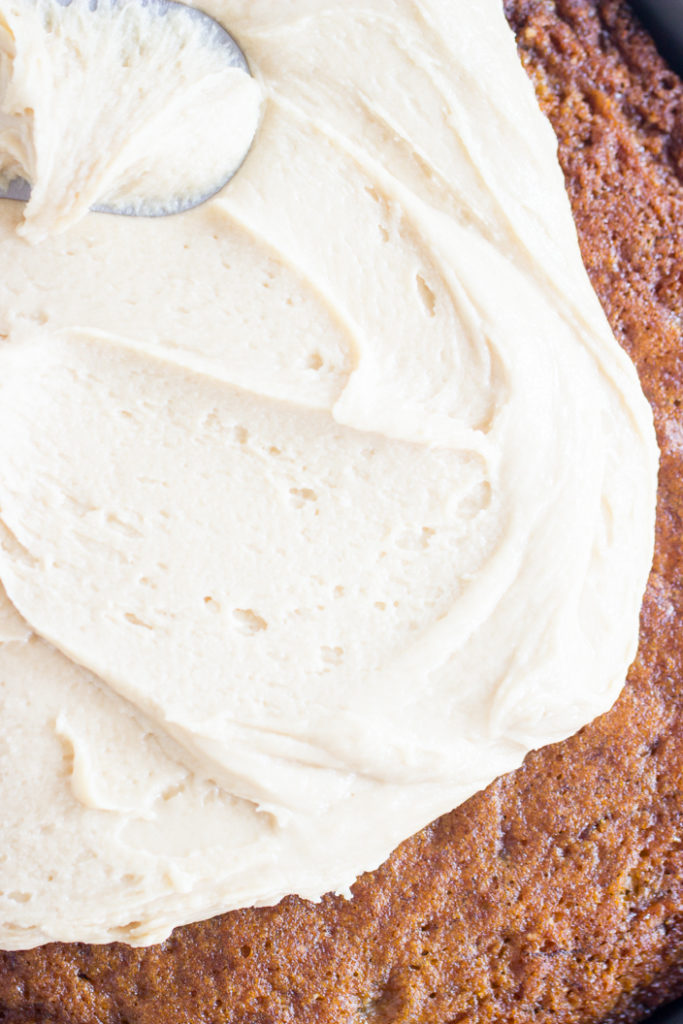 I’ve said this before, but it still holds true today — my S.O. eats about 3 bananas per 24-hour period, and it’s nearly impossible for me to get my hands on any. I LOVE baking with bananas, but he plows through them so quickly.

The other thing is he gets panicked that the bananas are going bad, and that they’ll go to waste before I bake something with them.

They’ll only just start to get a little spotty and brown, and he eats them! I can’t tell him enough times that I actually need the bananas to get brown, and that extremely ripe bananas make the best baked goods. He panics about it! 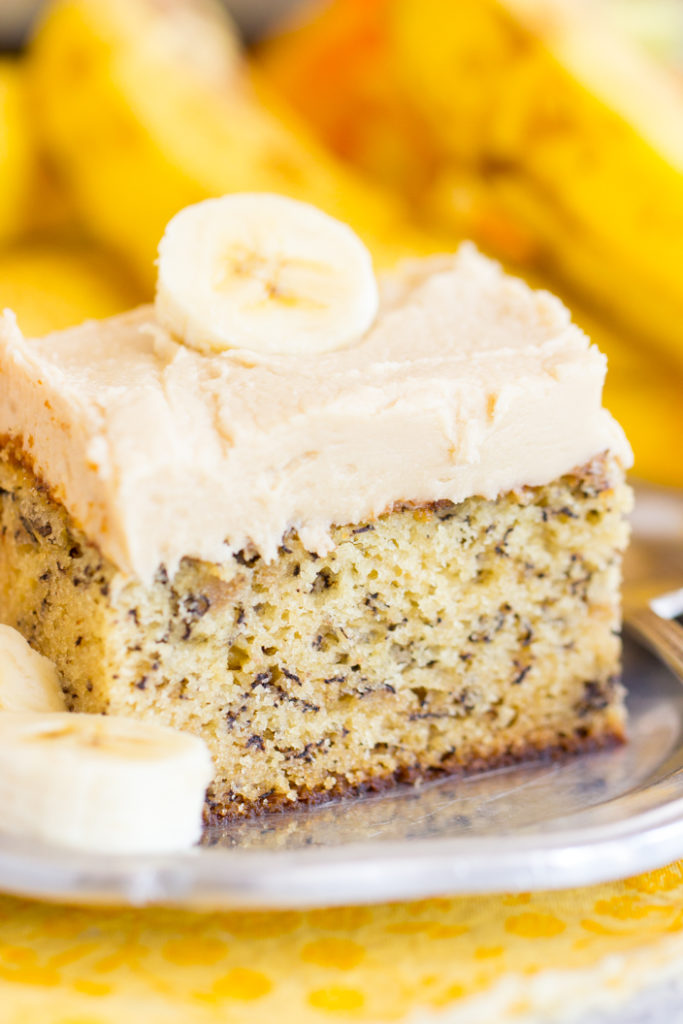 WHAT SHOULD MY BANANAS LOOK LIKE FOR BANANA CAKE?

That’s what you want for this recipe though…. bananas that are VERY spotty, soft, and quite brown. Very ripe. Almost too ripe. If you don’t want to wait for that to happen, and you’re craving Banana Cake STAT, bake unpeeled bananas on a baking sheet at 300 degrees for about 12-15 minutes. Let them cool a few minutes, peel, and you’re good-to-go. 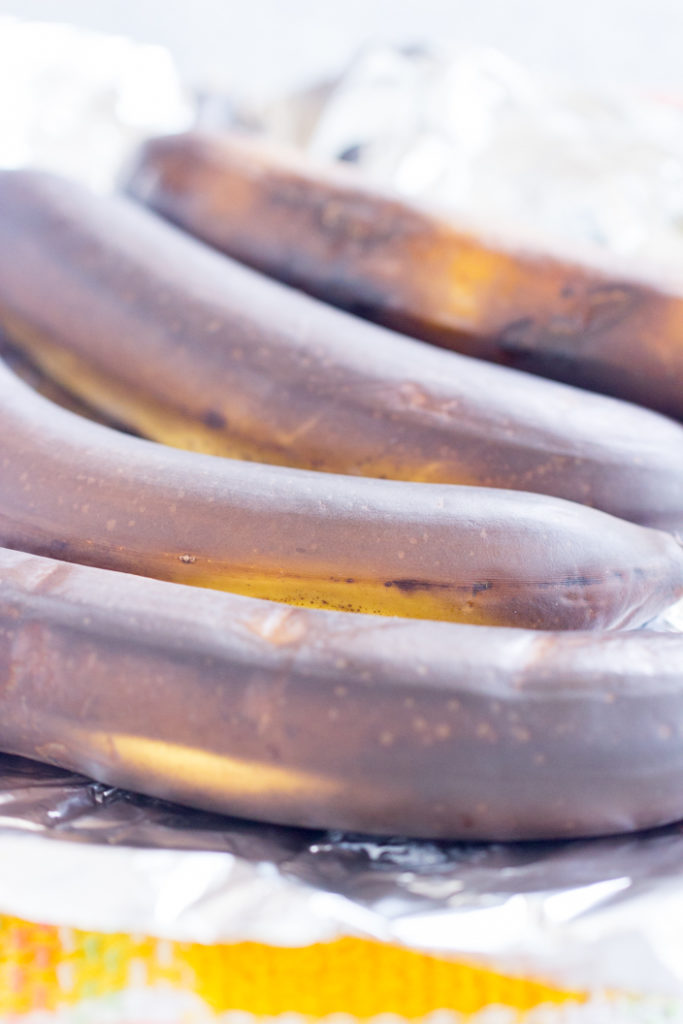 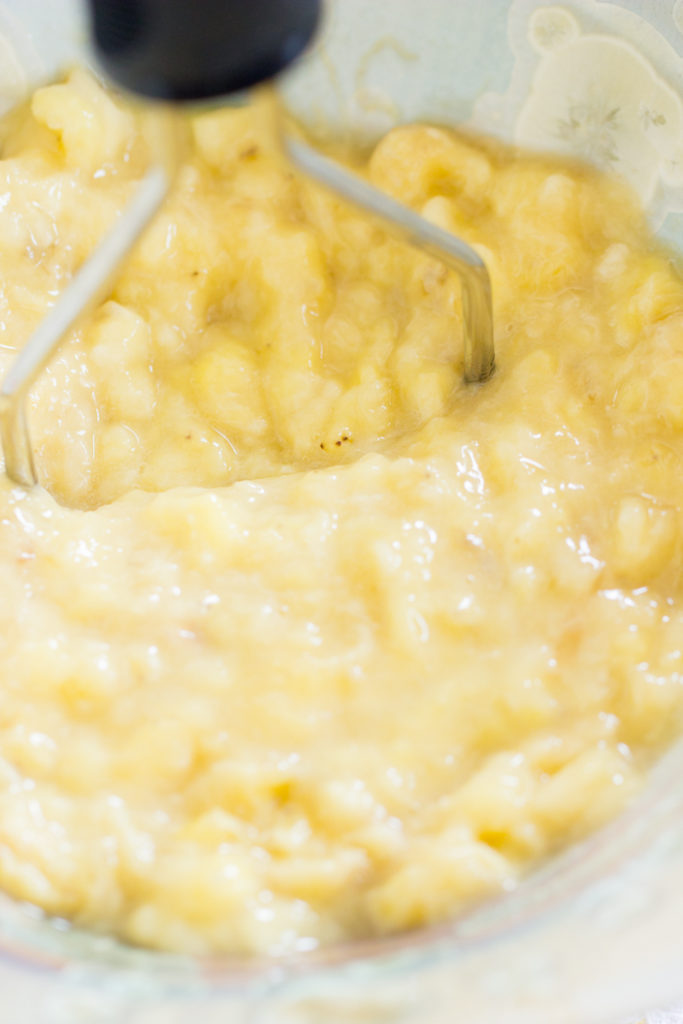 WHAT VARIATIONS CAN I MAKE WITH BANANA CAKE?

I’ve had this Banana Cake recipe for a lot of years now, and I come back to it again and again. I’ve made tall, layered cakes with this, I’ve spiked it with rum for a tropical effect, thrown in walnuts or pecans, made it into a sheet cake with cream cheese frosting, and today I’m sharing it as a sheet cake again, but with Brown Butter Frosting.

You can add coconut, any kind of nuts, and obviously vary the frosting. Cream cheese is a classic option, but brown butter is never a bad idea. I also suggest Nutella Buttercream or even Peanut Butter Frosting! So many things complement bananas, your options are many. 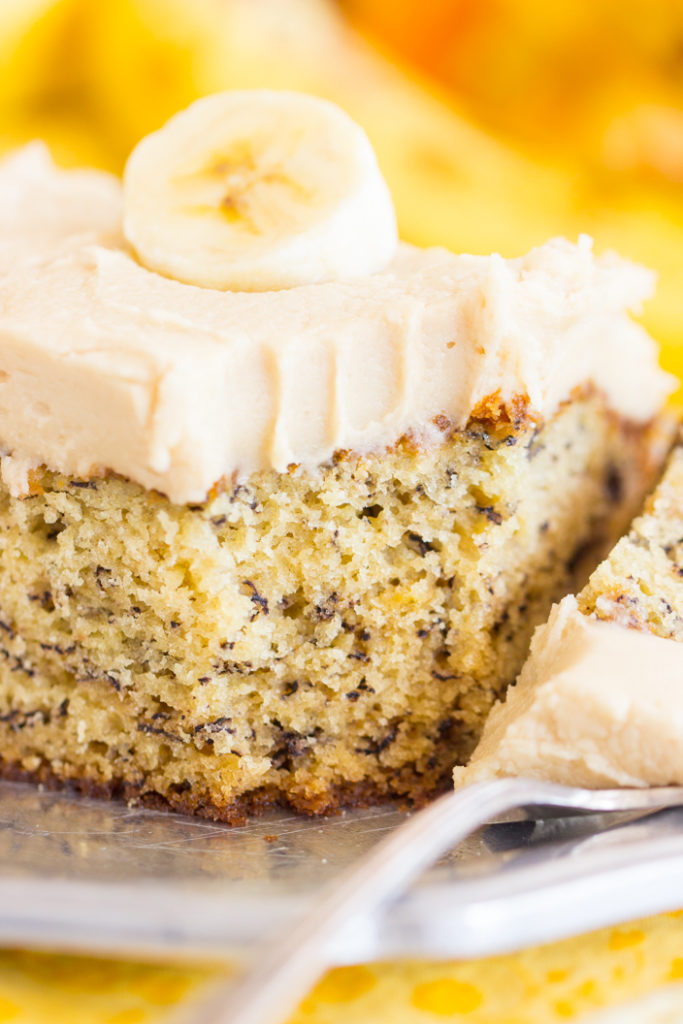 WHAT RESULT SHOULD I EXPECT FROM THIS BANANA CAKE?

This Banana Cake recipe produces a soft, sweet cake with serious banana flavor. Maybe more than a lot of banana bread recipes. It’s intense with banana, but the cake is also very buttery and light, it’s not dense, and not heavy. It has a soft crumb, yet manages to taste rich and luxurious, while also being intensely moist.

It’s definitively cake, there is nothing bread-y about this. If you think this is banana bread masquerading as cake, it’s not. It’s cake. It’s moist, soft, fluffy, and tender, yet a mass amount of bananas doesn’t weigh it down.

Look, I’m not even that wild about bananas and I love. this. cake. It’s fabulous. 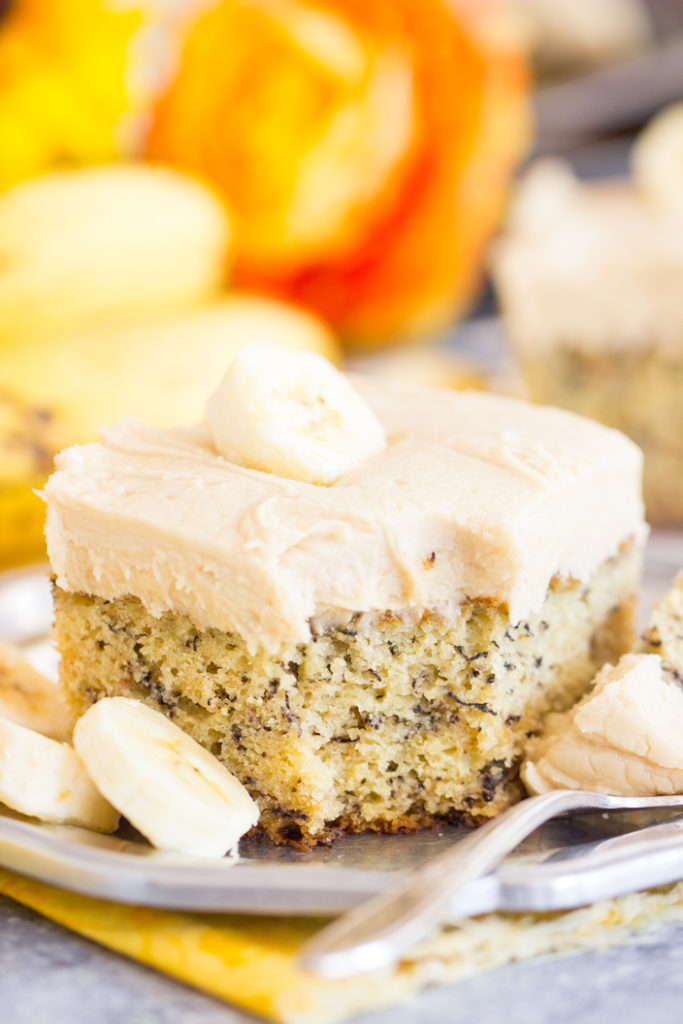 HOW DO YOU MAKE BROWN BUTTER ICING?

A tip I like to share if you’re making brown butter for the first time: know that it goes from brown to burned really, really fast. Once it’s very near being “done,” it completes in the blink of an eye, so watch it closely. I’ve added notes to that effect in the recipe card.

As you’re making it, the butter foams heavily, then the foam dissipates, and at that point, you’re about 95% done. You’ll want to watch it carefully. It’ll get dark, kinda like honey-colored, and you’ll see little brown flecks at the bottom of the pan. Your brown butter is done. Remove it from heat asap! 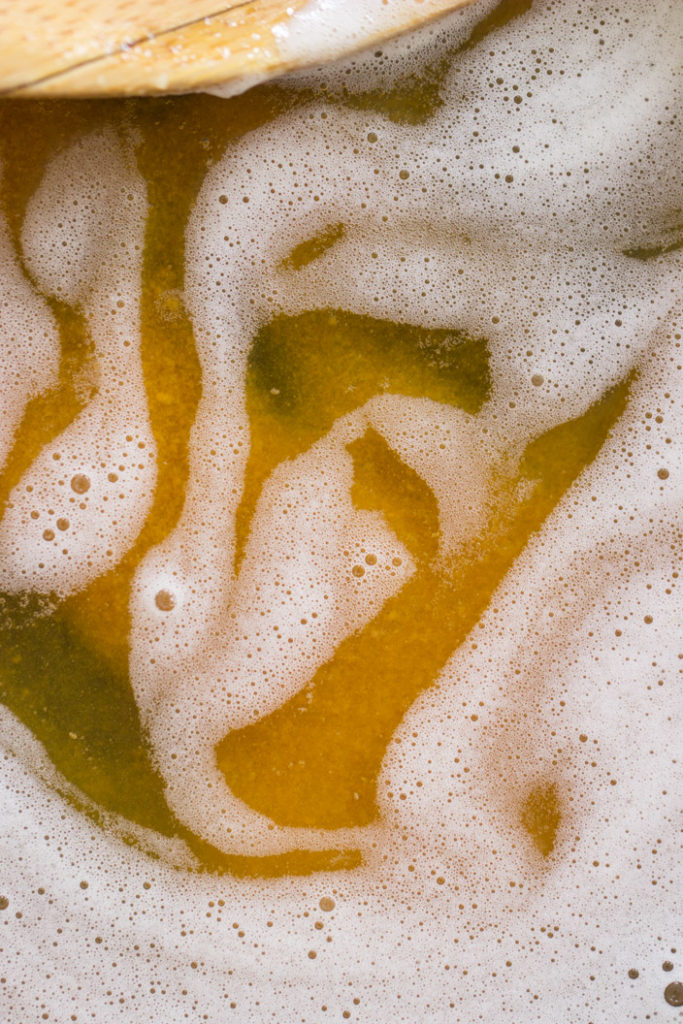 I’ve also added a note about troubleshooting this Brown Butter Icing. Occasionally it appears to seize and separate during mixing. That’s okay, and your Brown Butter Icing isn’t ruined — it just needs to be emulsified and thoroughly mixed. Whip it in an electric mixer for a minute or two, and it will come together.

For a thicker, stiffer alternative, one that you could pipe, check out this Brown Butter Frosting recipe.

WHAT FLAVOR & TEXTURE TO EXPECT WITH BROWN BUTTER ICING: 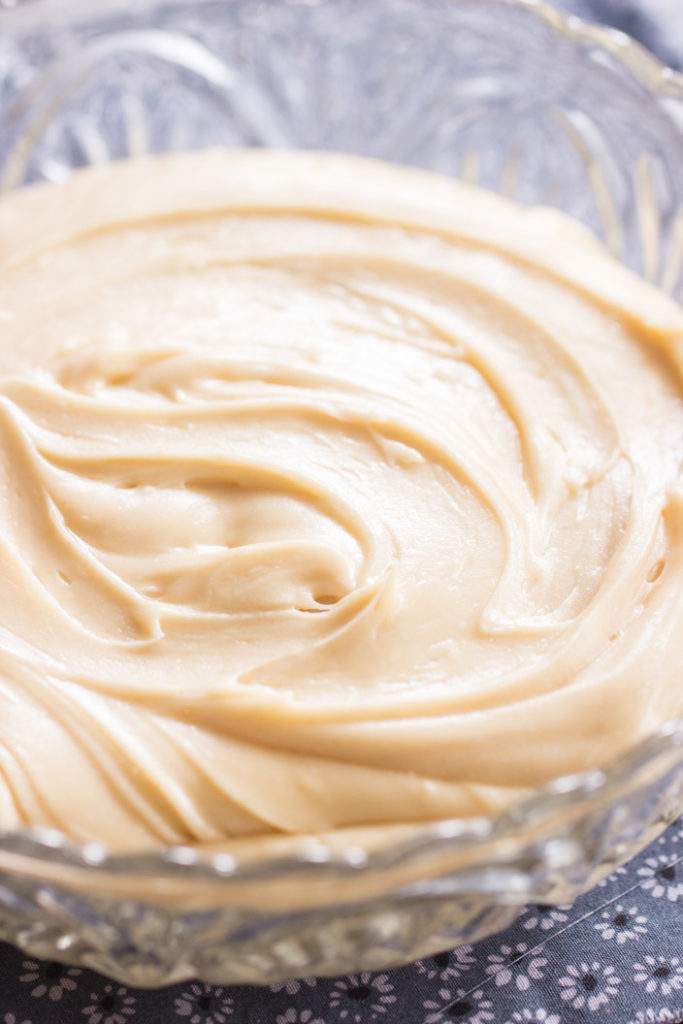 Brown Butter Icing is made with nutty, caramel-like, fragrant, toasty, rich brown butter. Just a batch of brown butter mixed with powdered sugar, vanilla, and your usual frosting suspects until smooth and creamy.

Anytime I want to amplify a recipe and take it up a notch, I brown the butter that’s going into it. Icing is no exception. 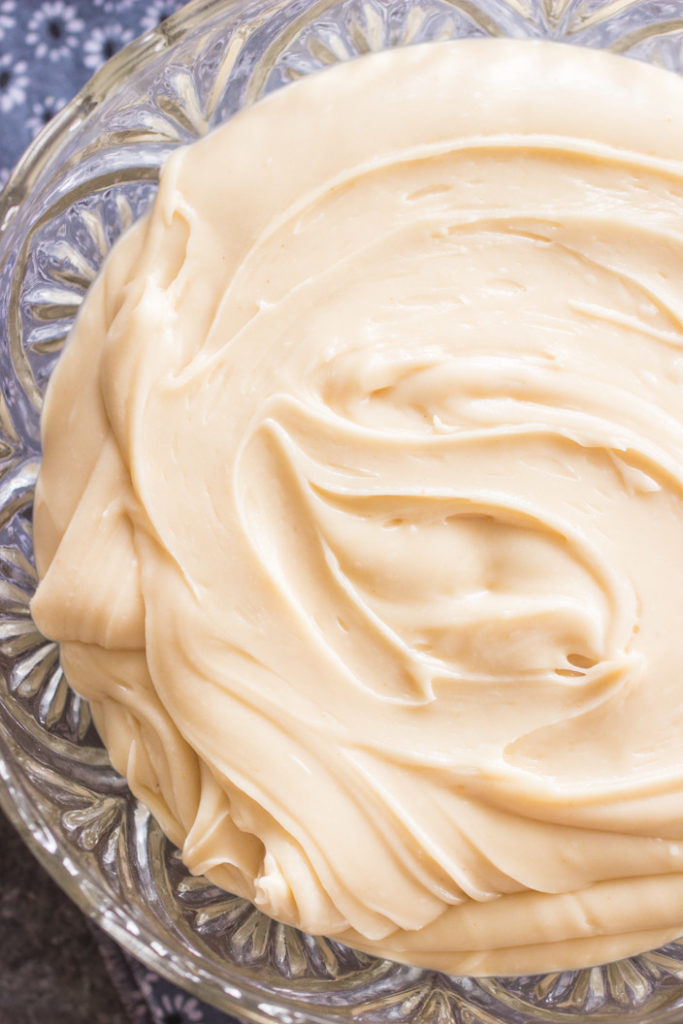 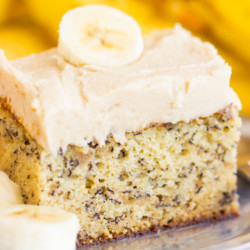 HOW TO STORE BANANA CAKE:

Covered, in a cool, dry place for 3-4 days, or refrigerated for about a week. It will freeze beautifully. I would freeze both components separately. Cover and wrap the banana cake well in plastic wrap and/or foil (I like to do a layer or two of plastic wrap, followed by a layer of foil). Store the frosting in a tightly-sealed plastic container. Thaw both components when ready to serve, and assemble at room temperature. 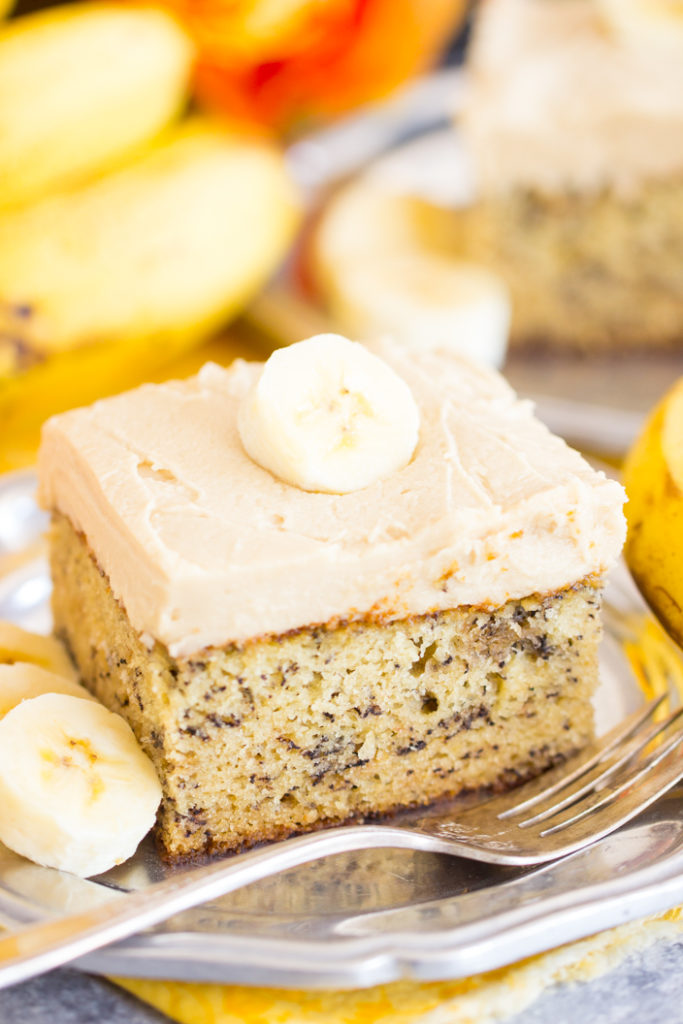