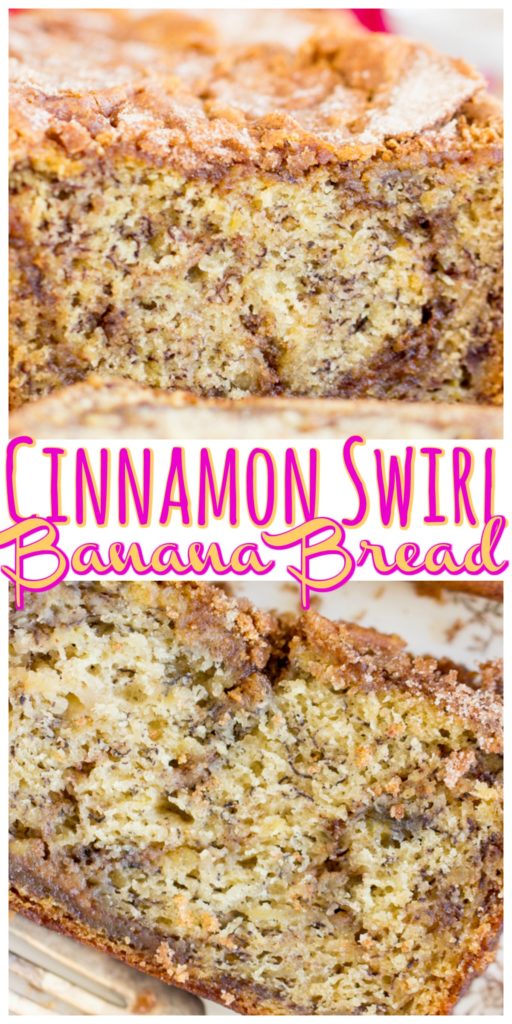 It feels like the banana bread-baking craze is over, but I want to get it going again, and my plan for that starts with this Cinnamon-Swirl Banana Bread. 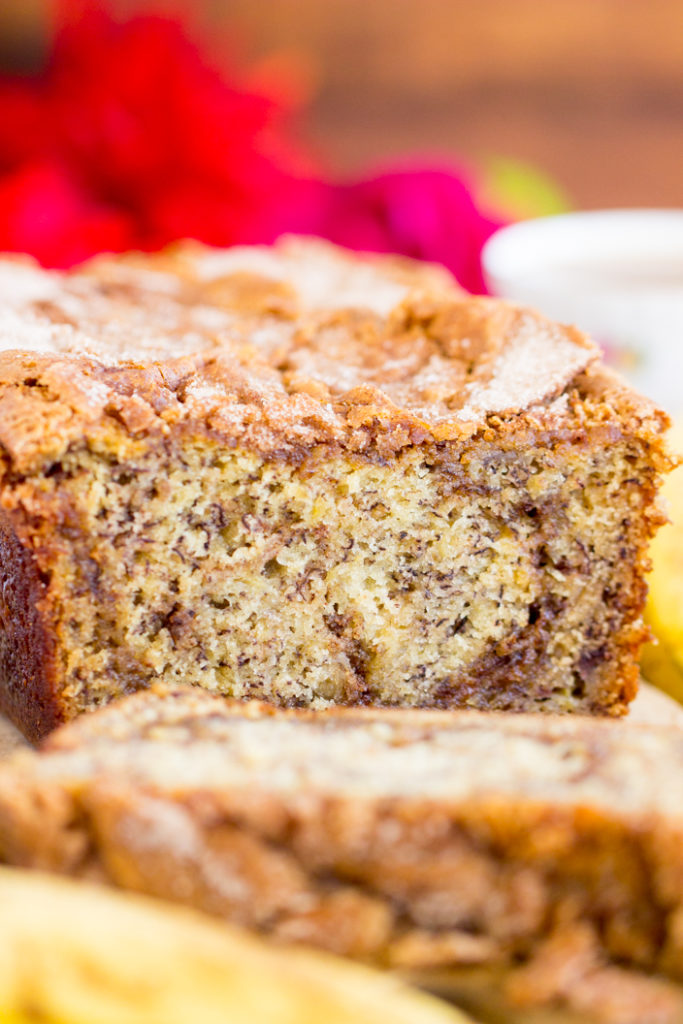 Nothing brilliant, and yet it’s a real game-changer! The inspiration for this idea came from my Gma’s Pistachio Bread. Cinnamon-swirl is the name of the game with that bread, and I thought: why can’t banana bread, or most any bread have cinnamon-swirl too? It can, and should. And should’ve sooner. 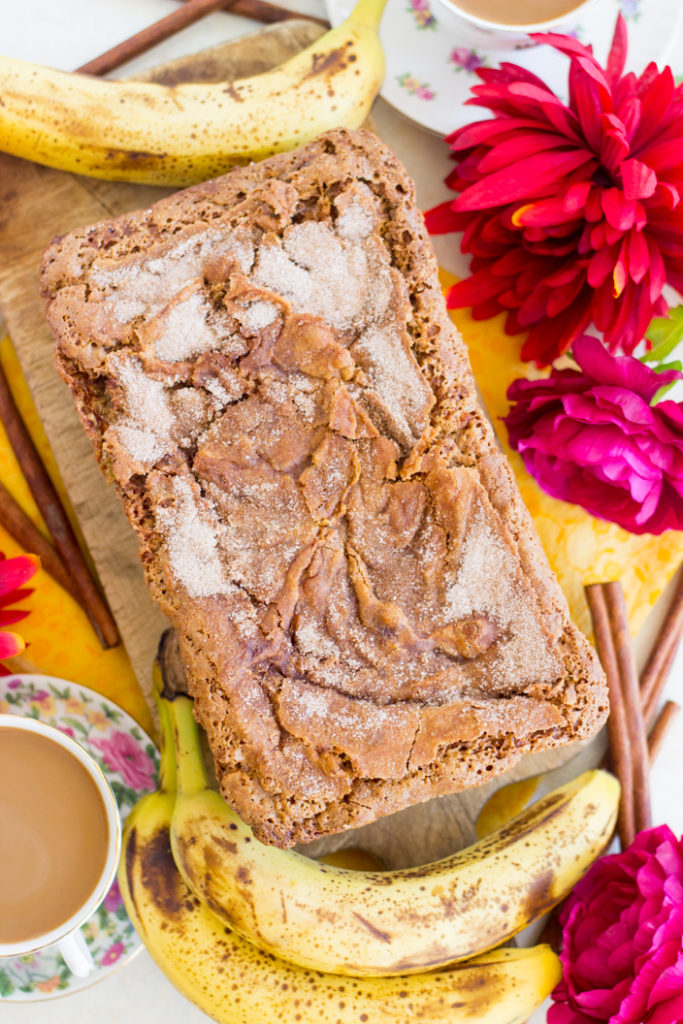 You may never want banana bread without it now! This Cinnamon-Swirl Banana Bread features two thick ribbons of cinnamon-sugar-swirl action throughout the bread, and a third swirl on top. The swirls that bake within the loaf get ooey-gooey and sticky-sweet, while the cinnamon-sugar swirl on top gets crackly and lightly crunchy. All-around win. 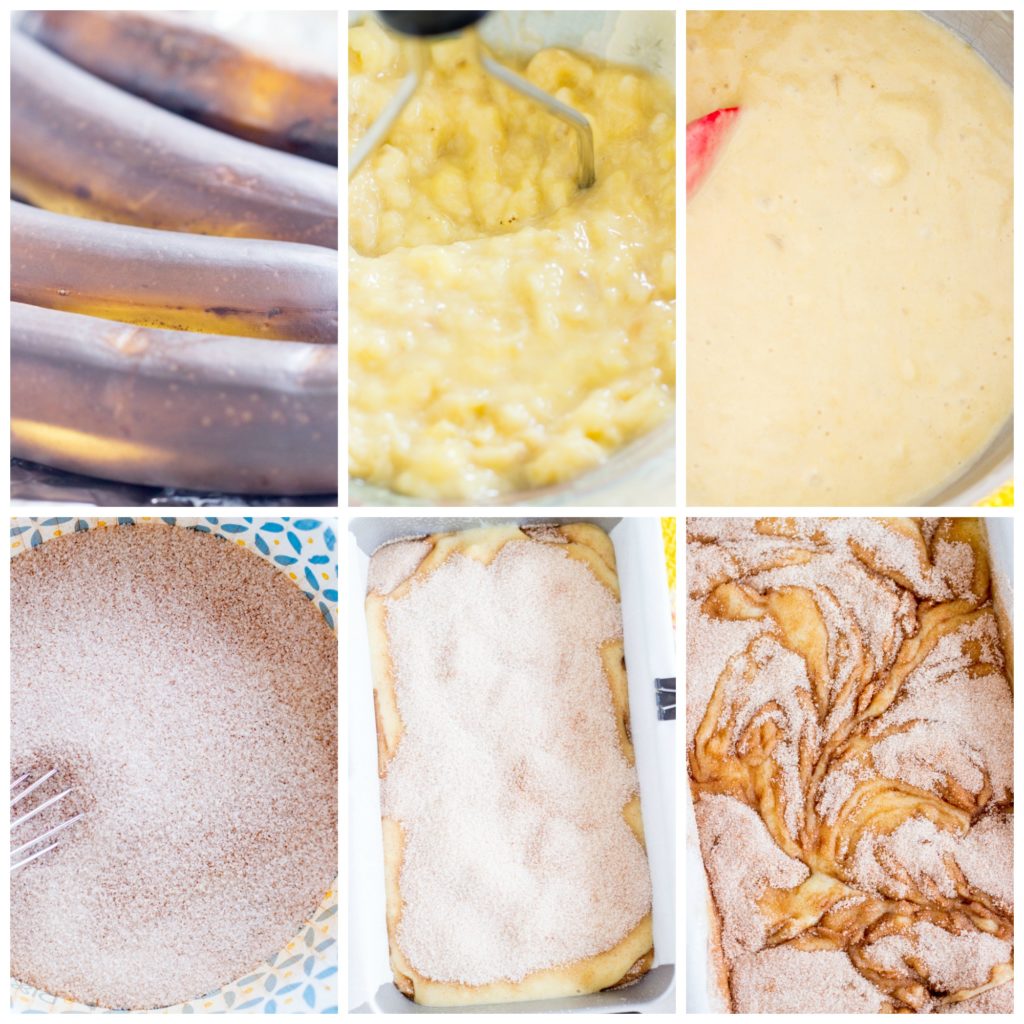 If you haven’t been here before, a quick review about why this banana bread recipe is my favorite, with or without cinnamon-swirl.

It’s my go-to because it is strong on banana — one loaf contains 3 large bananas! So not only is it potent with ripe banana, but it’s also incredibly moist and dense, but still soft. It’s not wet or soggy, and it’s not a brick. It’s weighty and hearty, but very soft. 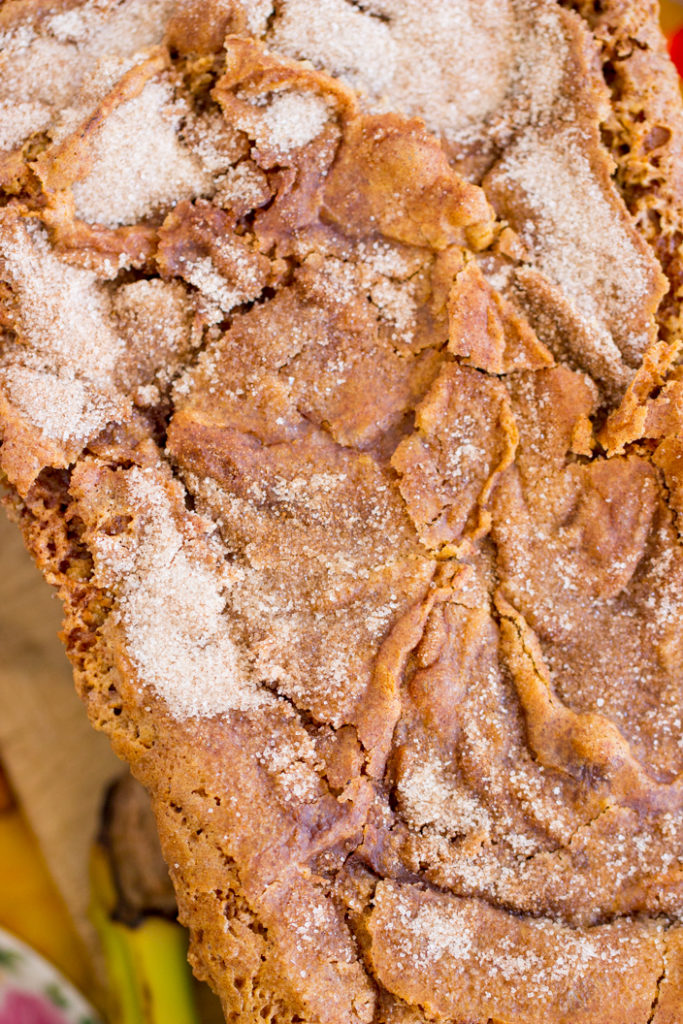 Sweet enough to satisfy a true sweet-tooth and can stand in as dessert, but not too sweet where it’s cake masquerading as bread. It’s really well-balanced in sweetness.

Also, it’s uncomplicated. This banana bread is easy to whip up and calls for basic ingredients.

Another reason I like Katie Lee’s banana bread recipe is for its versatility. I’ve made it into muffins, mini bundts, and 8×4 loaves. I’ve added chocolate chips, nuts, dried fruit, fresh fruit, and many other mix-ins with total success (just add about a cup).

I’ve even adapted it to accommodate ingredients like pumpkin, zucchini, peanut butter, and bacon.

Lastly, I’ve made that banana bread with a streusel on top. I didn’t do that here because I didn’t want to cover up the cinnamon-swirl, but believe you me, I was very tempted to deck this out with a streusel. 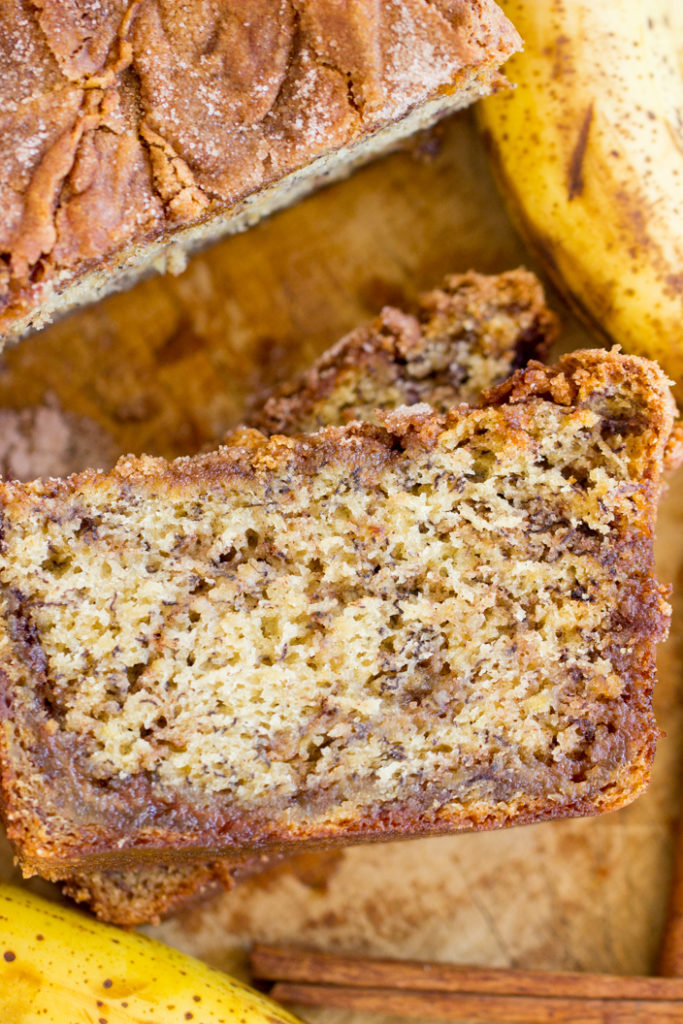 WHAT SHOULD MY BANANAS LOOK LIKE FOR BANANA BREAD?

You want very ripe bananas, ones that are very soft and spotty. Even if they’re quite brown, that’s what you want. If you don’t want to wait for that to happen, and you’re craving Banana Bread STAT, bake unpeeled bananas on a baking sheet at 300 degrees for about 12-15 minutes, or until thoroughly browned. Let them cool a few minutes, peel, and you’re good-to-go. 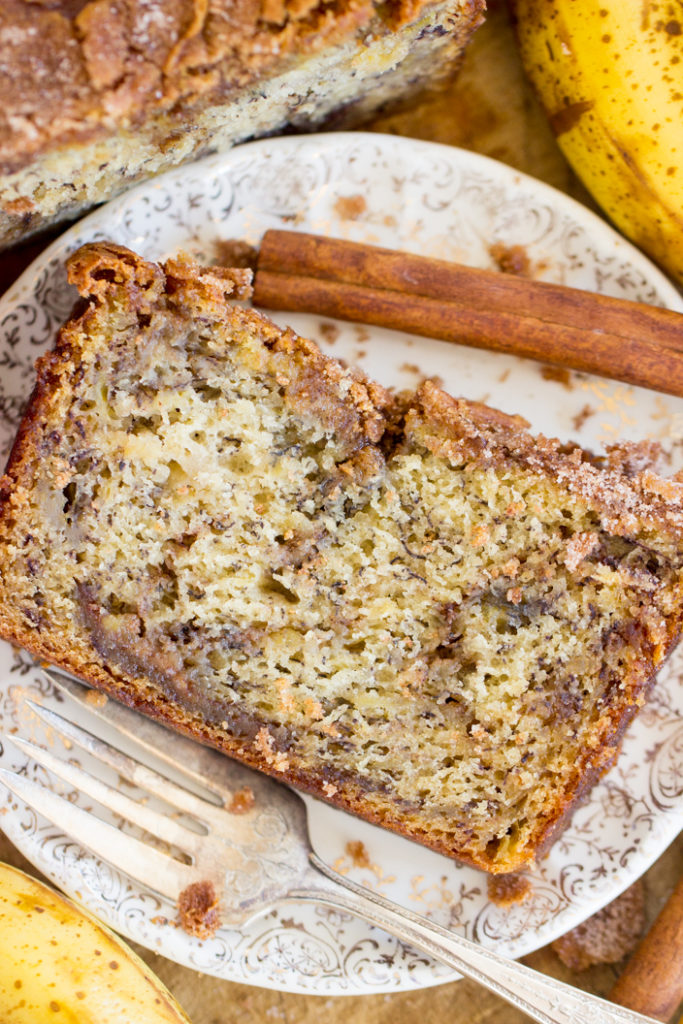 Since this is a quick bread, there’s no yeast required, no rising, and no kneading. You also don’t need to haul out your mixer to prep this Cinnamon-Swirl Banana Bread. Stir together by hand with minimal equipment, just a few bowls.

Do not overmix. You can have a few small lumps, batter does not need to be perfectly smooth. Overmixing will result in dry, tough bread, so stir wet and dry ingredients together until just combined.

Baking time can vary depending on the type of pan you’re using. A dark metal pan will cook faster, whereas a lighter metal pan, glass pan, ceramic, or silicone pan can require longer baking times.

Also, for even baking and browning, rotate the pan 180 degrees halfway through baking.

Through and through, the best way to know your loaf is ready is when the edges and top are golden brown, and a toothpick inserted near the center comes out clean.

Cool in the pan for 15-20 minutes before removing bread. Do not cool entirely in the pan or bread will stick. 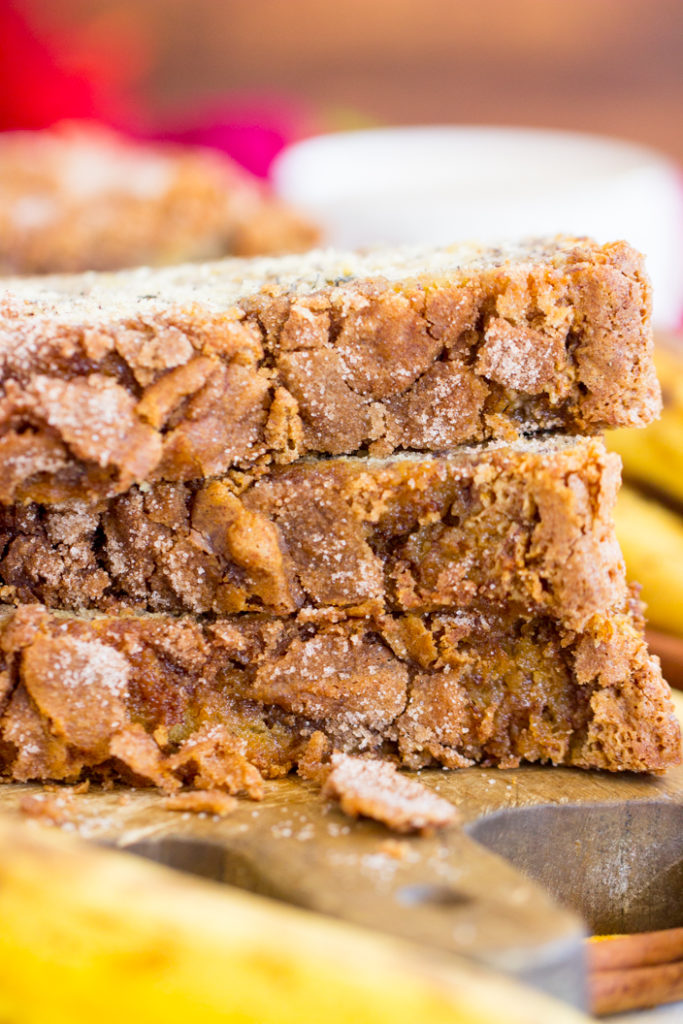 Store in a tightly-sealed container or wrapped in plastic wrap in a cool, dry place at room temperature for up to 3 days, or in the refrigerator for up to a week.

When ready to serve, thaw at room temperature.

What else am I forgetting? Drop me a line if you have any questions! Otherwise, enjoy this oh-so-genius Cinnamon-Swirl Banana Bread recipe!! 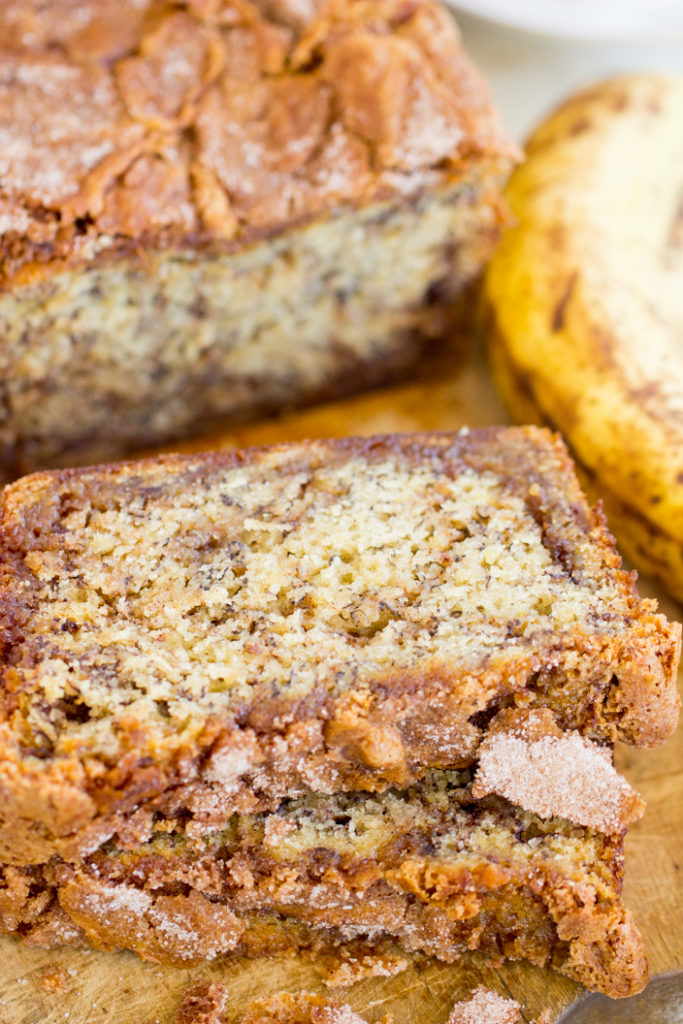 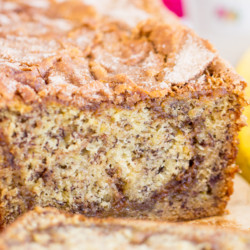 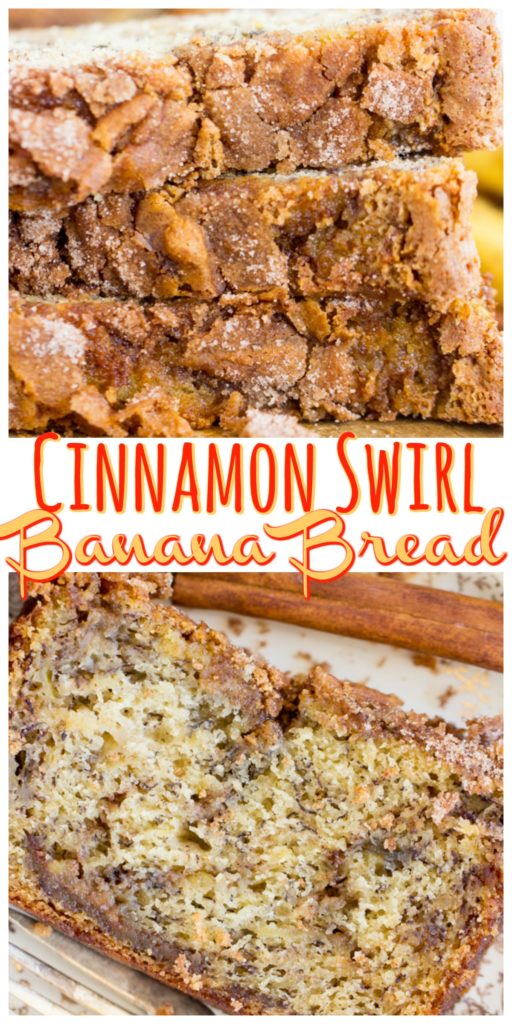 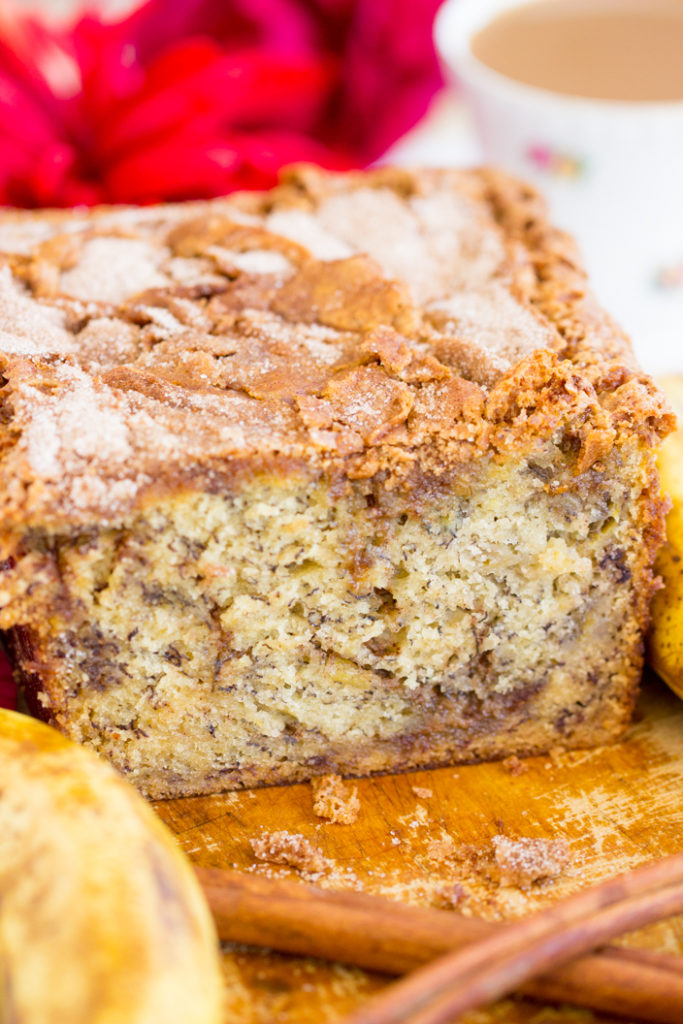