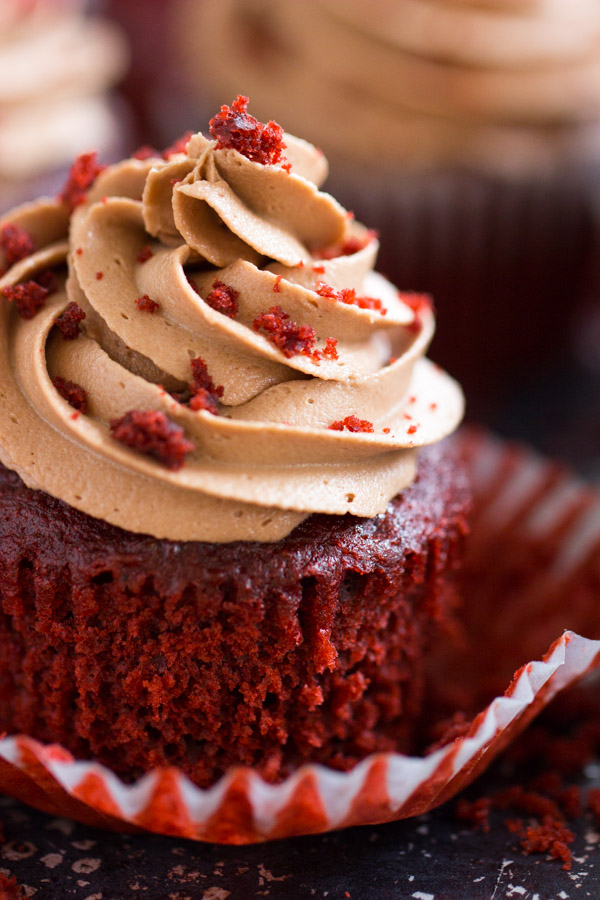 Happy Super Bowl Sunday! Are you excited for the game?? What are you making today? I posted this Homemade Soft Pretzels recipe and they are ready in 90 minutes – not bad for a yeast-based baked good. I also posted this Super Bowl Italian Stromboli, and it’s ready in 30 minutes flat, so you have two good Super Bowl snacks that aren’t time-consuming. 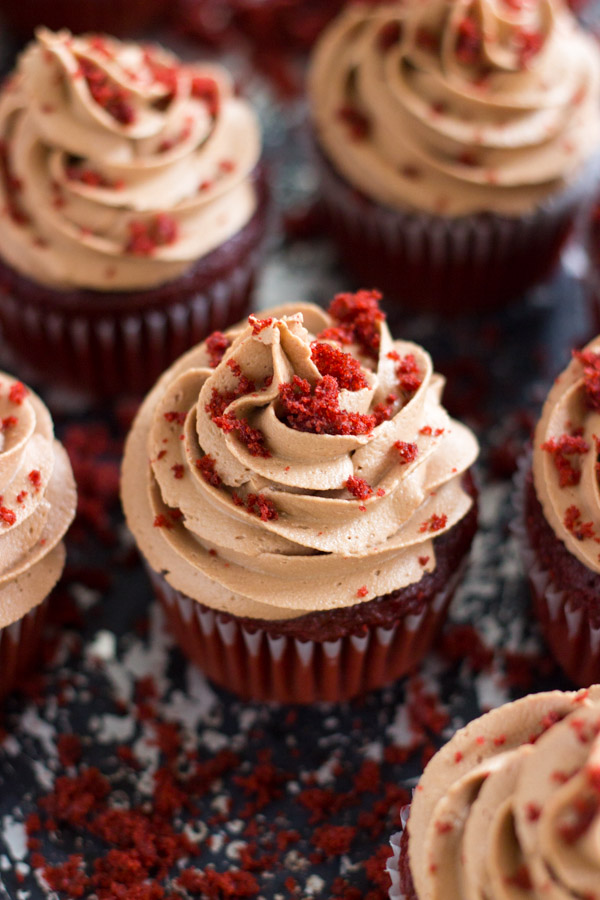 I’m making these Homemade Soft Pretzels, and I have a bunch of these Raspberry White Chocolate Almond Bars in the freezer, as well as these Chocolate-Covered Strawberry Thumbprints. So even though it’s not Valentine’s Day, I’m eating Valentine’s Day desserts for the Super Bowl anyway. Including these Red Velvet Cupcakes with Nutella Buttercream. Whoop!

I’m excited for the game, but I’m pretty sad that football season will be over. I never know what to do with myself on Sundays from spring to fall. Or on Monday nights, and Thursday nights. I tried to get into baseball last year so that I could have a sport to follow when it’s not football season, but I couldn’t get into it. I’m going to give it a go again this year because I just hate not having sports to follow for half the year. 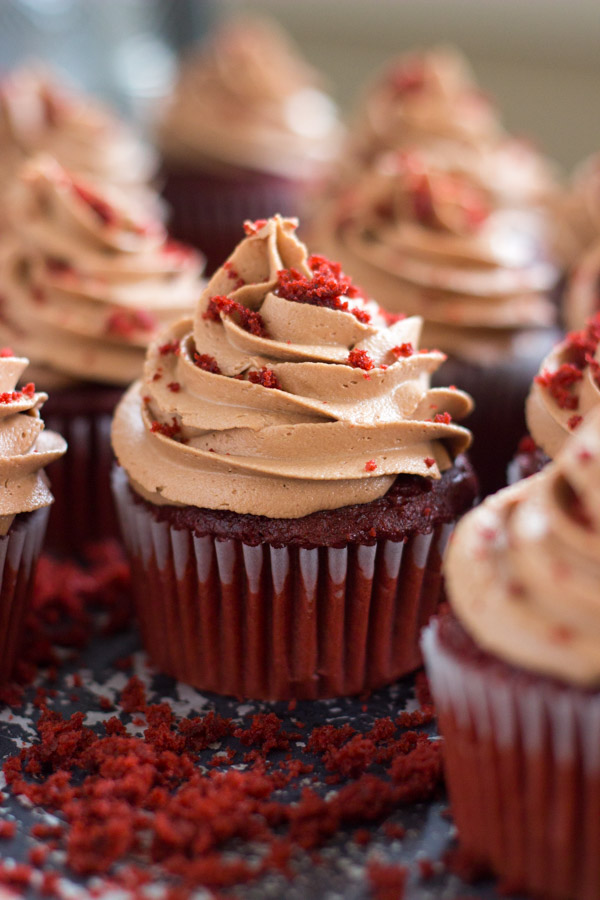 I’m sharing a Valentine’s Day recipe on the day of the Super Bowl because I’m going to be tied up with a work conference for the next 4 days or so. If I don’t post today, I probably won’t all week, and I want to make sure you know about these Red Velvet Cupcakes with Nutella Buttercream because they are absolutely guaranteed to be your new favorite dessert. 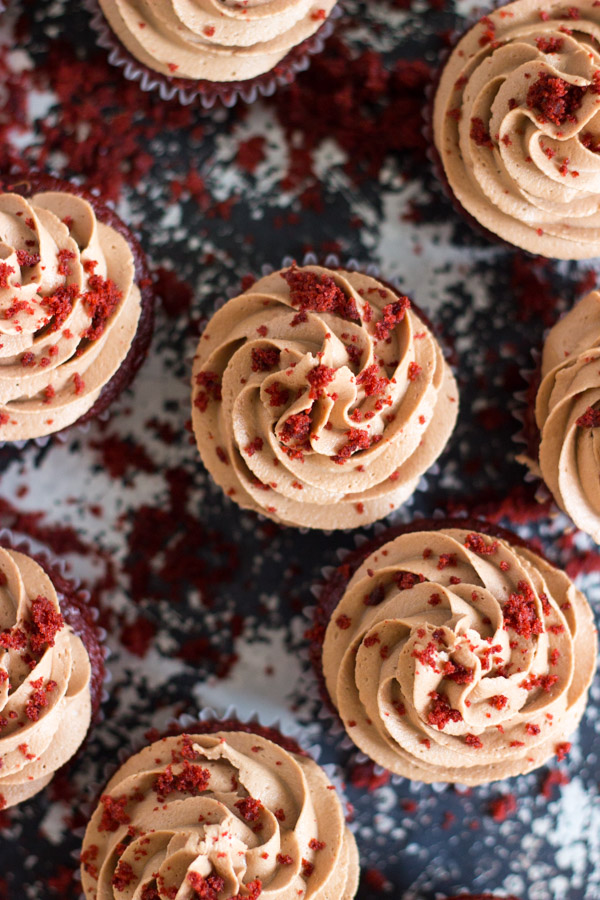 I didn’t make red velvet cupcakes from scratch. Sorry!! And I don’t regret it, to tell you the truth. I truly felt that using milk chocolate cake mix, and adding red food color, these tasted like real red velvet cupcakes. They were moist and wonderful, with a hint of cocoa. I don’t know… I’m fine with box cake mix sometimes. There are plenty of great homemade red velvet cupcakes recipes out there, so you could certainly make them from-scratch, if you’d like.

If you’re not going to use cream cheese frosting on red velvet, then Nutella Buttercream is the only other way to go. That’s what makes these Red Velvet Cupcakes with Nutella Buttercream such showstoppers, and so unbelievably addicting. I could not stop with these cupcakes. 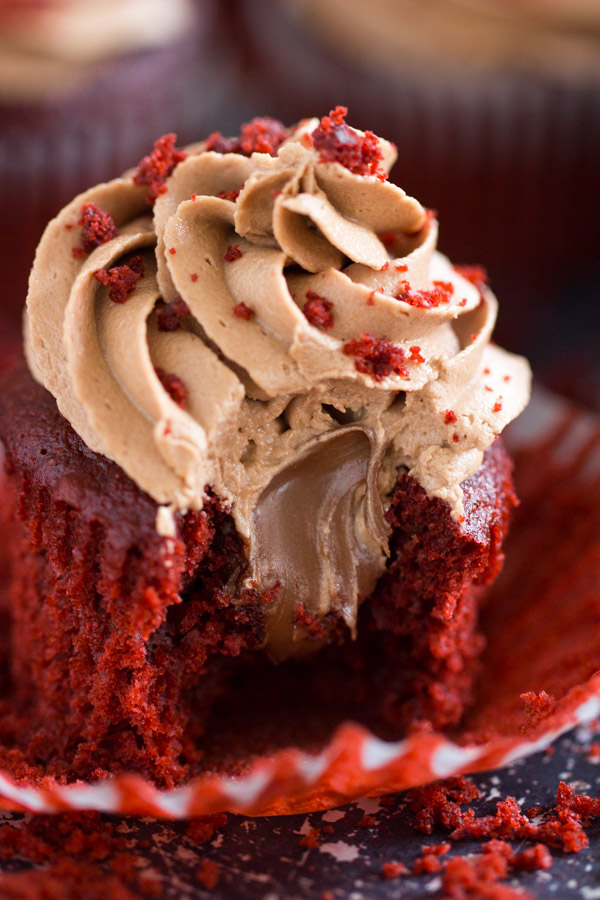 Nutella buttercream is the most delightful stuff, and it whips up so light and fluffy. It’s like Nutella was made to be put in buttercream frosting. It is so easy to work with, and naturally whips up the most fluffy buttercream. Full of chocolate and hazelnut, it’s rich, sweet, and fluffy. So, so good.

I carved out the center of these cupcakes and filled them with – what else? – Nutella. Chocolate ganache would be a really nice option too, but for me, it had to be Nutella. It’s so creamy and rich, and it makes for such a luscious center to the cupcake. 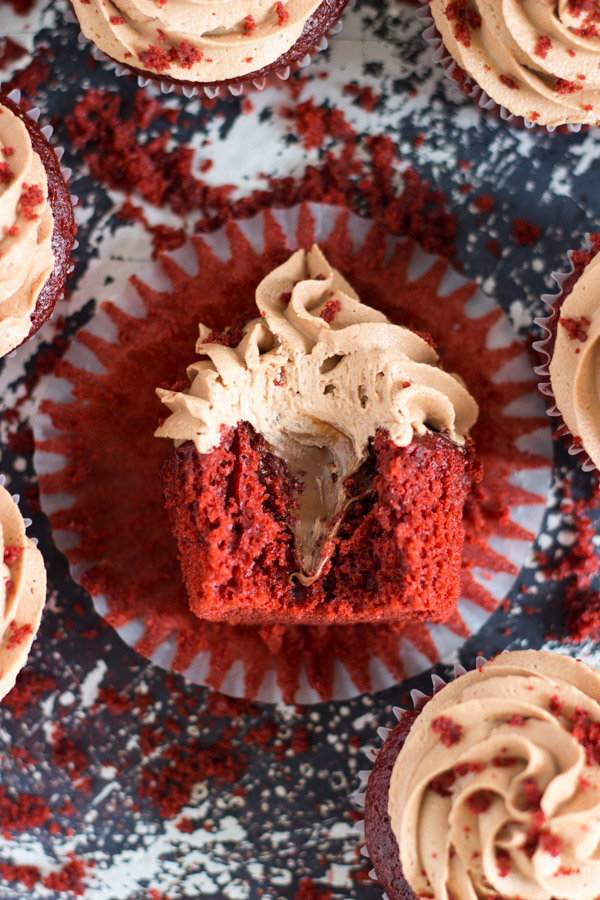 You bite into this moist red velvet cupcake, and are met with luscious Nutella, and a fluffy Nutella buttercream. These are impossible to resist! Make these Red Velvet Cupcakes with Nutella Buttercream for your Valentine, and they will truly know how much you care. 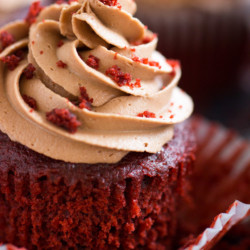 For filling and buttercream:

For filling and buttercream: 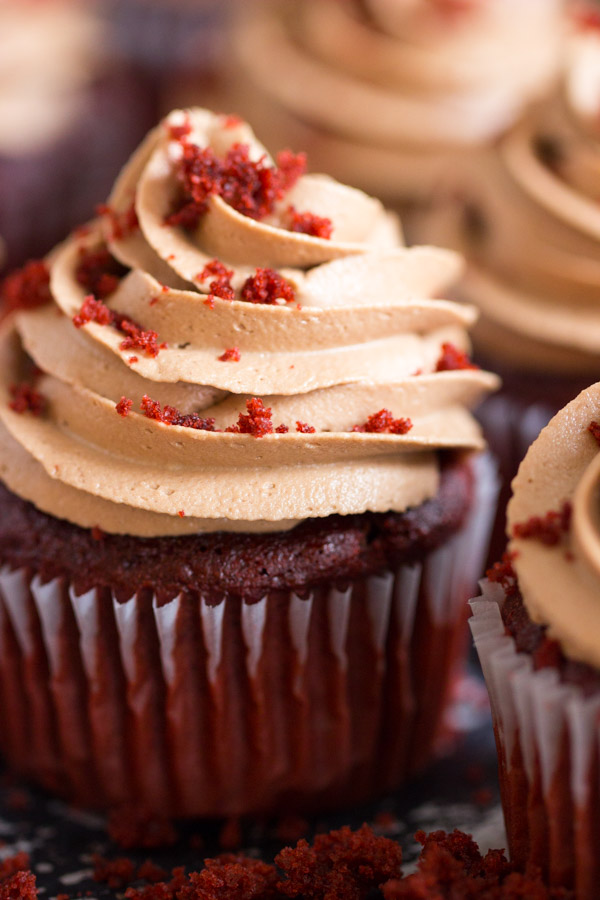 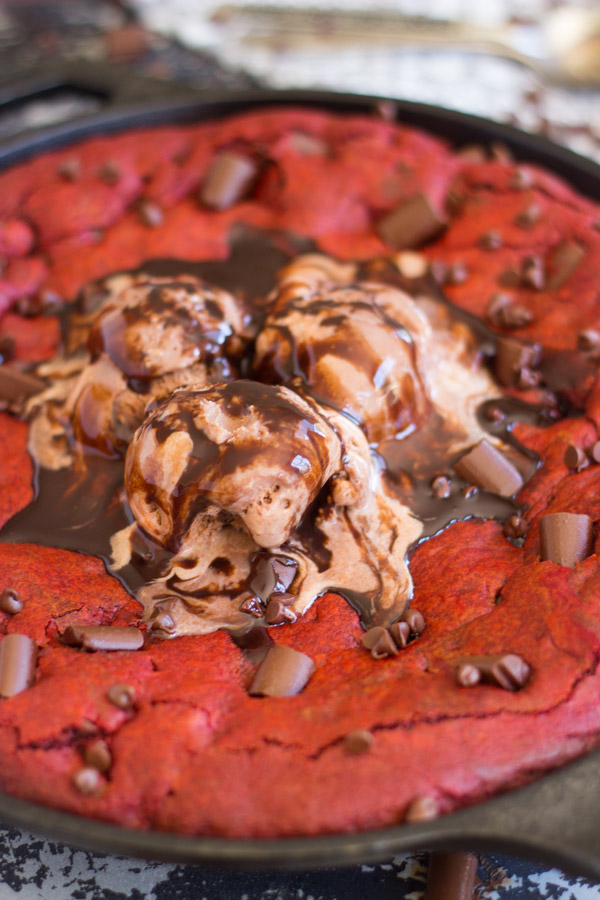 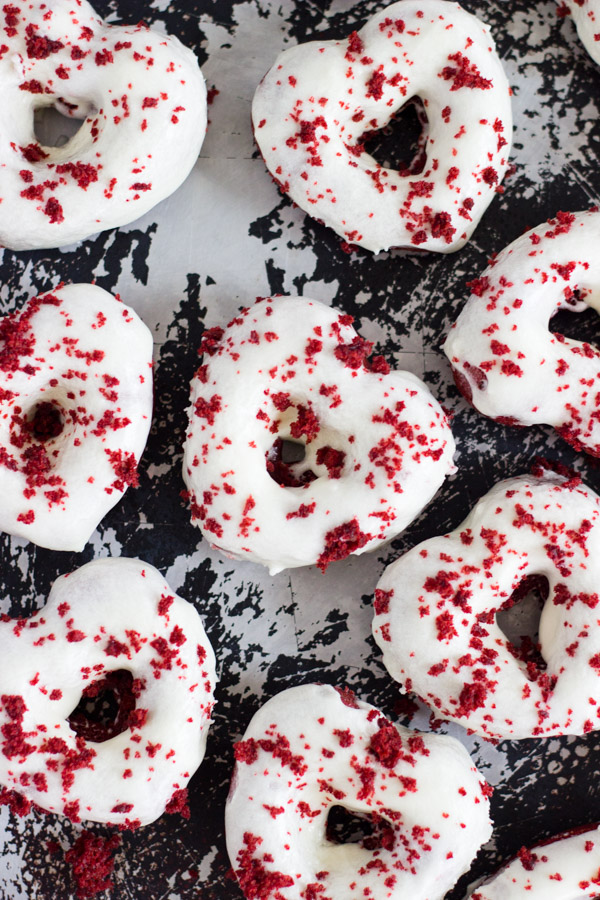 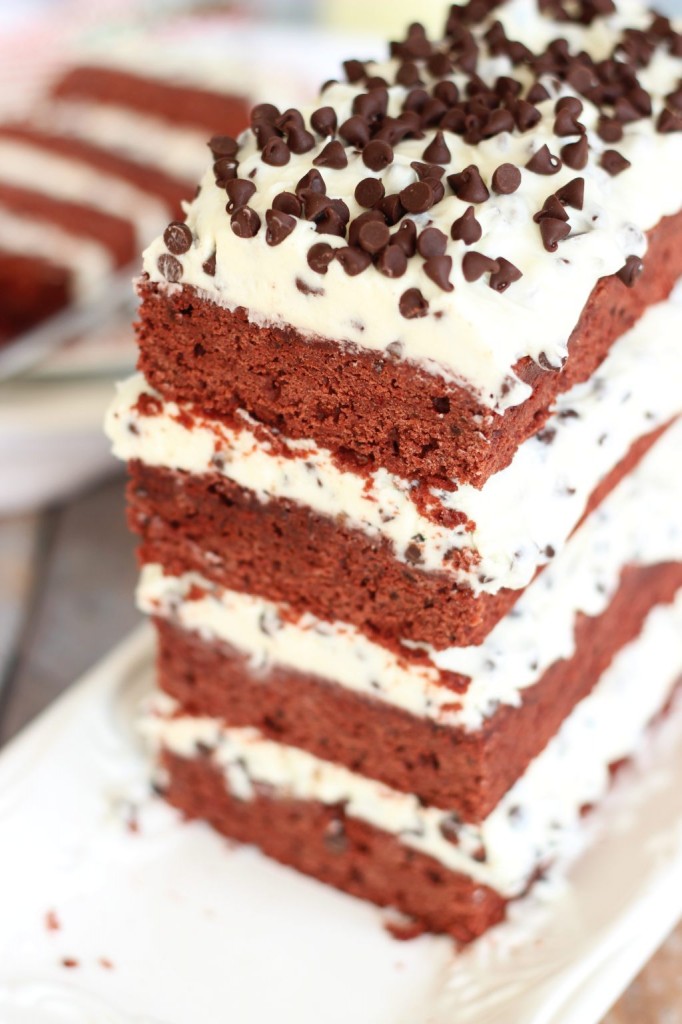 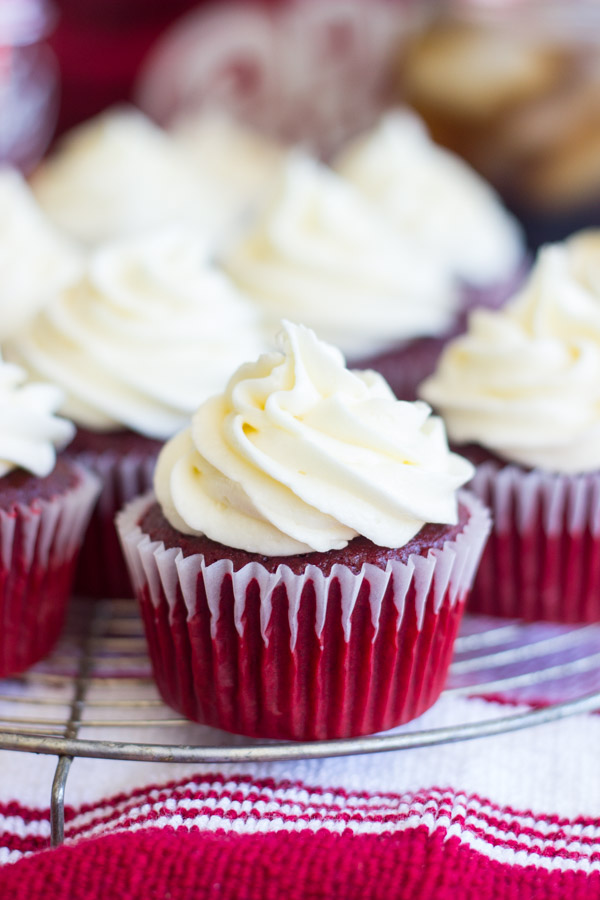 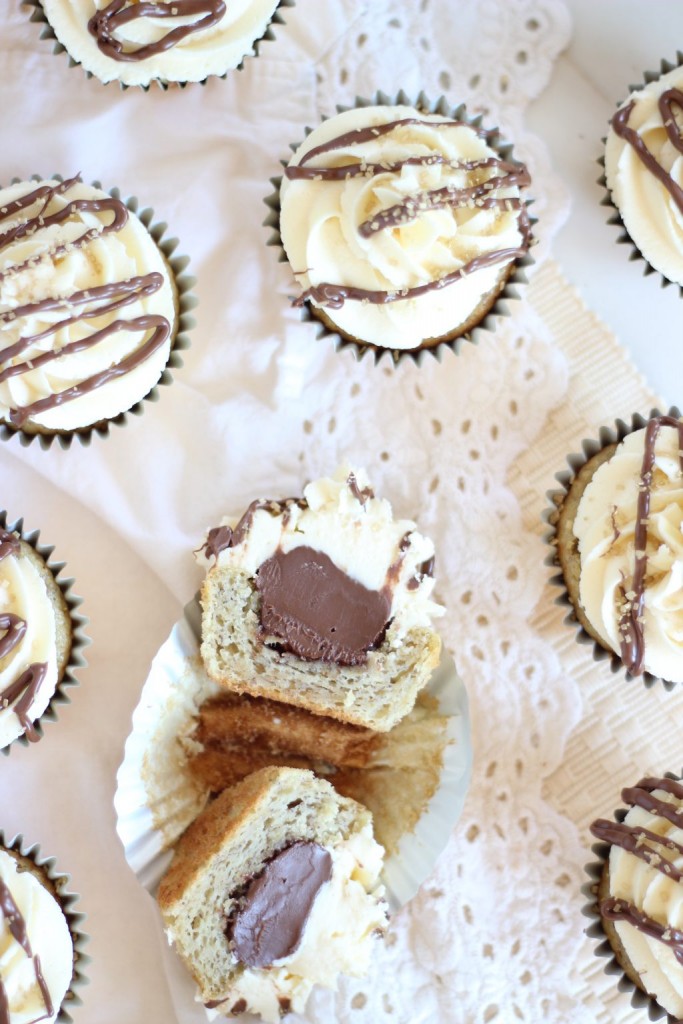 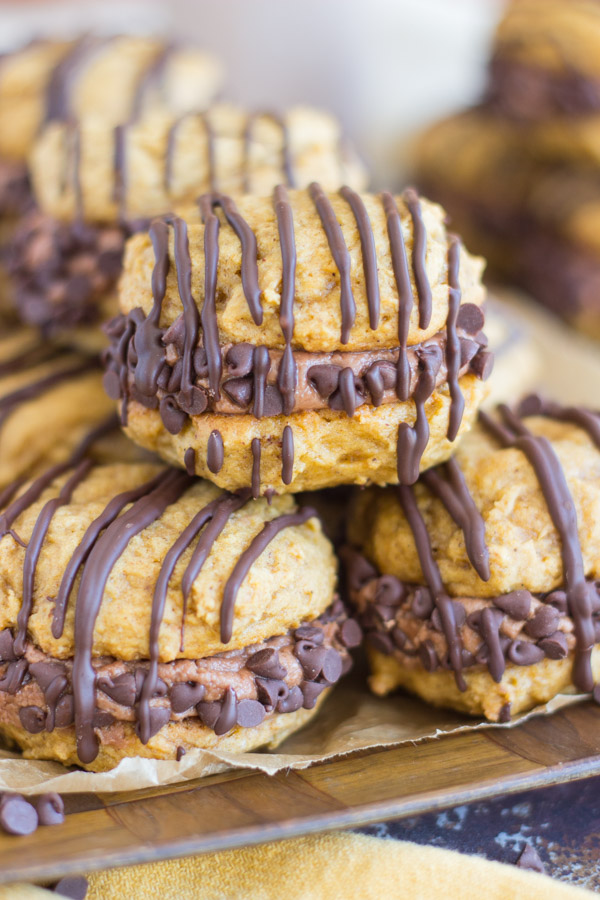