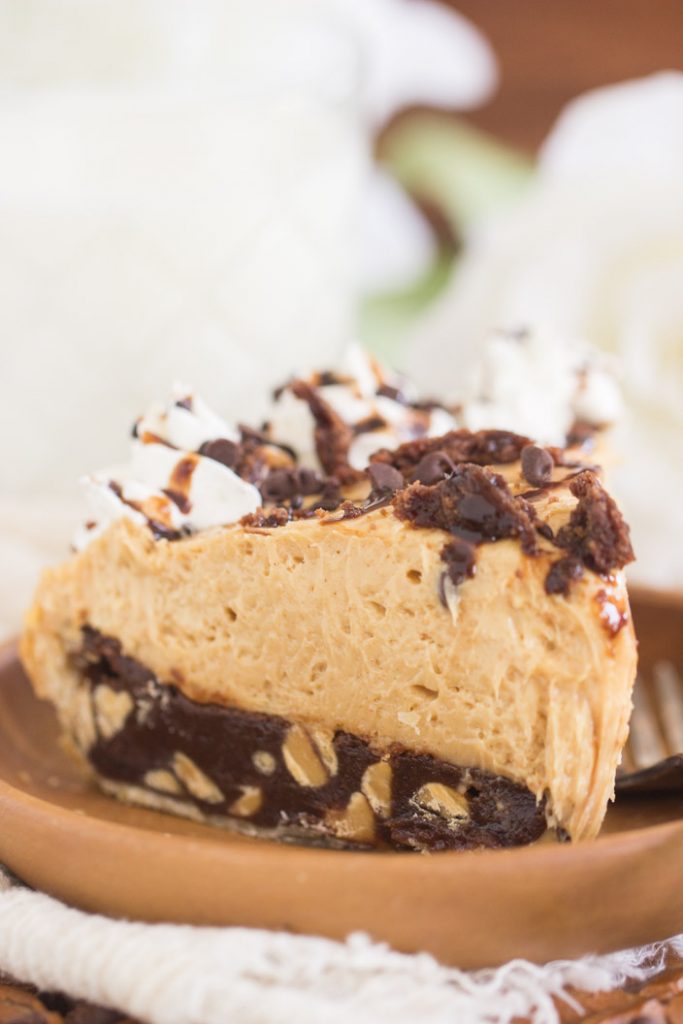 This Brownie Bottom Peanut Butter Pie isn’t a no-bake like my Gma’s classic No Bake Peanut Butter Pie recipe is, but it’s still super easy — like it doesn’t get all that much easier than this. But yeah, this particular version is not a no-bake version. It’s worth the ever-so-slight extra effort. 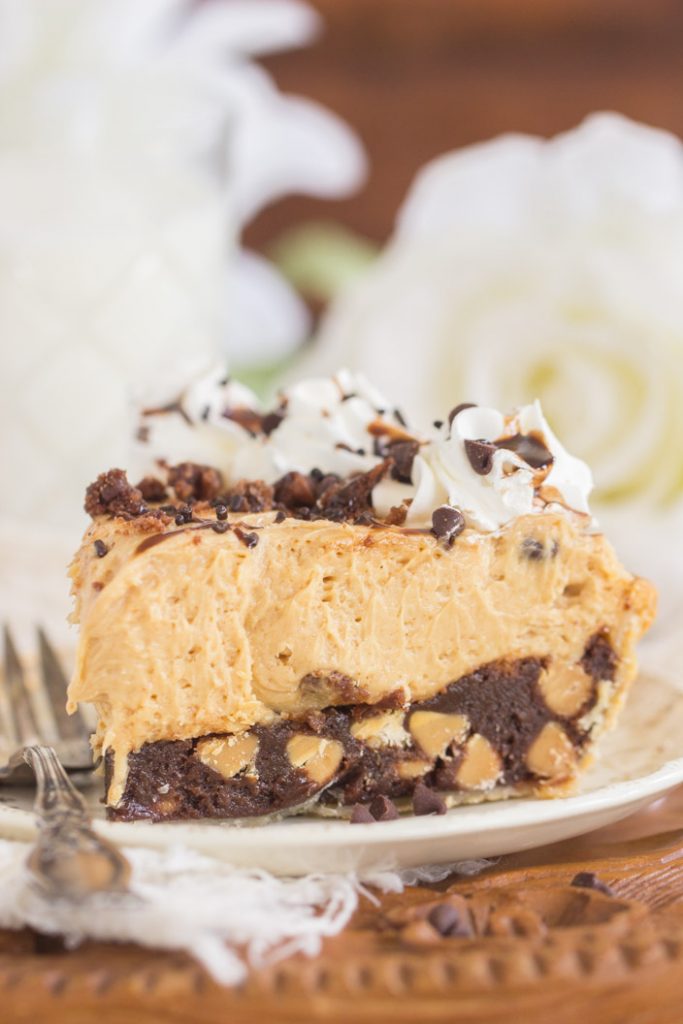 That brownie layer is a game-changer here. It’s easy-peasy because it’s box brownie mix (*shrugs*), which I happen to like. I like homemade brownies more, yes (see these insane Ultimate Fudgy S’mores Brownies or Peanut Butter Streusel Brownies for my fave homemade brownie base), and they’re actually ridiculously simple to make from-scratch, but I also don’t turn my nose up at box brownies. 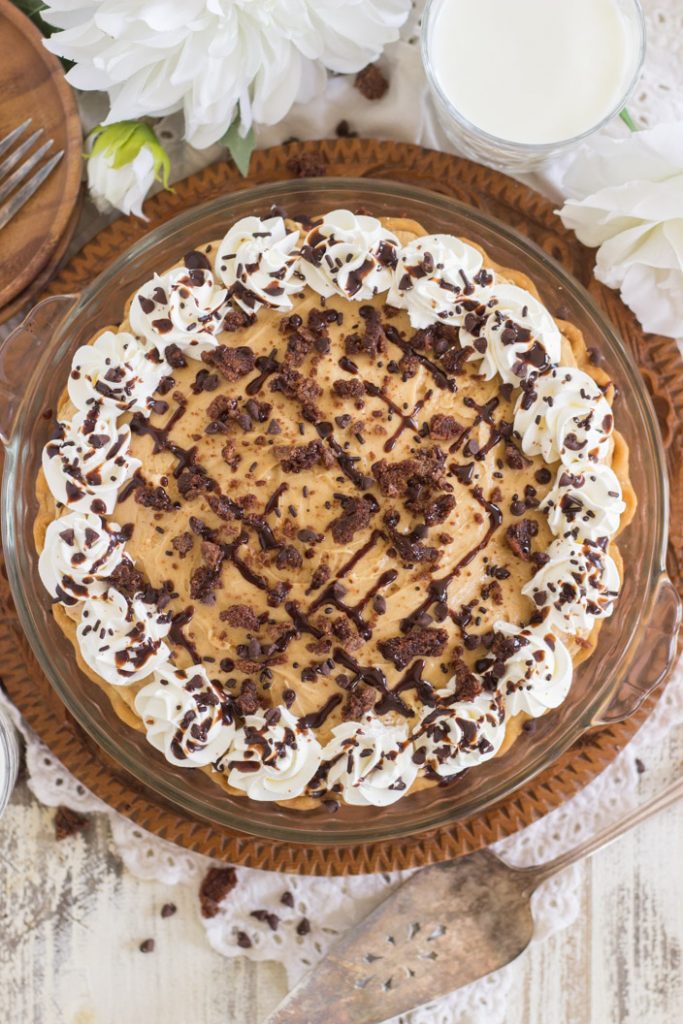 Box brownies are pretty damn great. I like to make them in an 8×8-inch pan and they turn out exremely thick and really fudgy, and I’m cool with that result. Slap on some homemade frosting (maybe Nutella Buttercream or Peanut Butter Frosting?), and what could be better??

For this Brownie Bottom Peanut Butter Pie, you get a similar effect…. a really thick, fudgy brownie layer. It’s actually richer and more chocolate-y because you don’t make this brownie batter exactly like the box says. It’s a little different, you make less volume of brownie for this pie so that everything fits. Make sense? 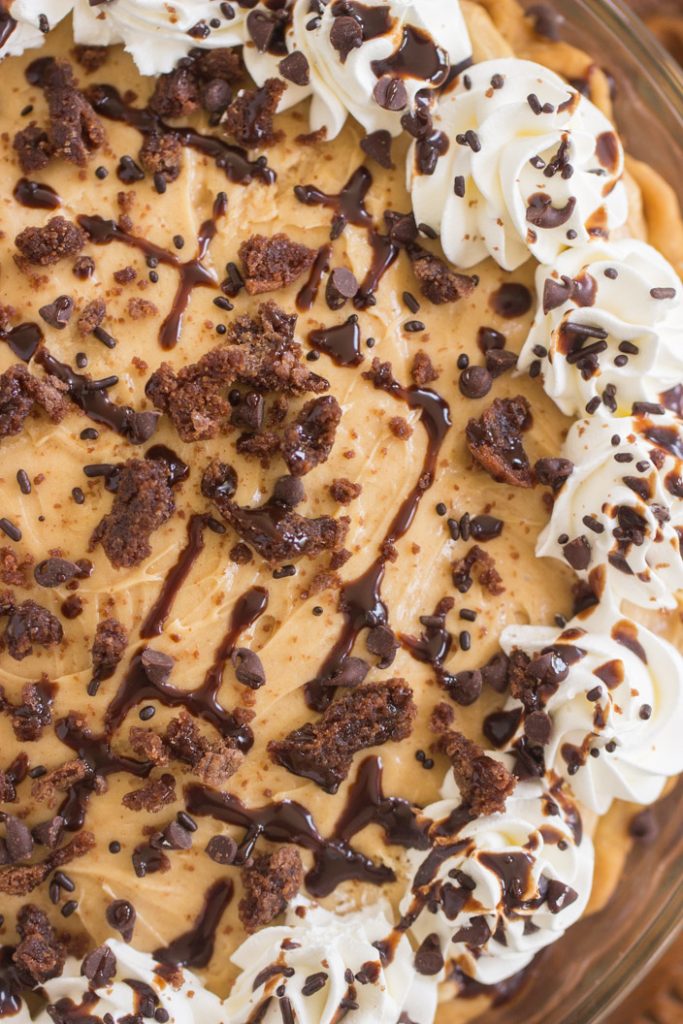 The brownie layer is almost, quite literally, like fudge, but it still has kinda crispy edges and a crackly top. Peanut butter chips give a boost of PB deliciousness to this already killer Brownie Bottom Peanut Butter Pie, and pull everything together.

On top of the brownie layer is that rich, creamy, amazing peanut butter filling that we’ve all come to know and love. Rich and full of peanut butter goodness, yet still light and creamy. 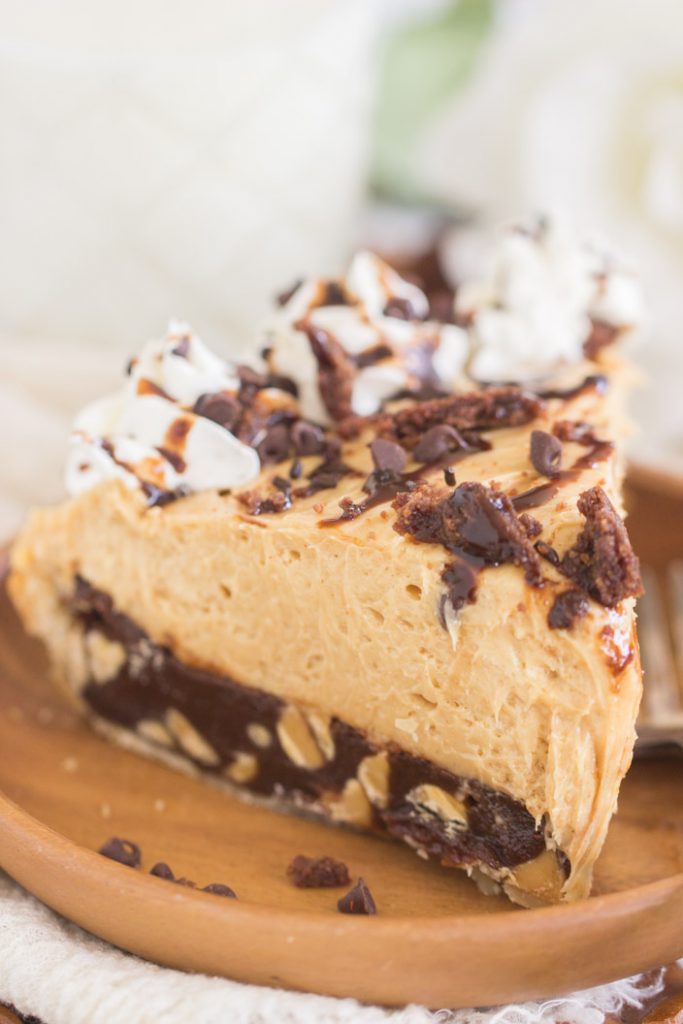 With my Brownie Bottom Peanut Butter Pie, you get flaky pie crust, fudgy brownies, and mousse-y peanut butter pie filling all in one easy, fuss-free dessert!

Topped with whipped cream, sprinkles, and brownie crumbs for quick garnishes, and this thing looks like you got it from your fave local bakery. No one will know that you took a few short-cuts and that this show-stopping Brownie Bottom Peanut Butter Pie is actually a breeze to make. 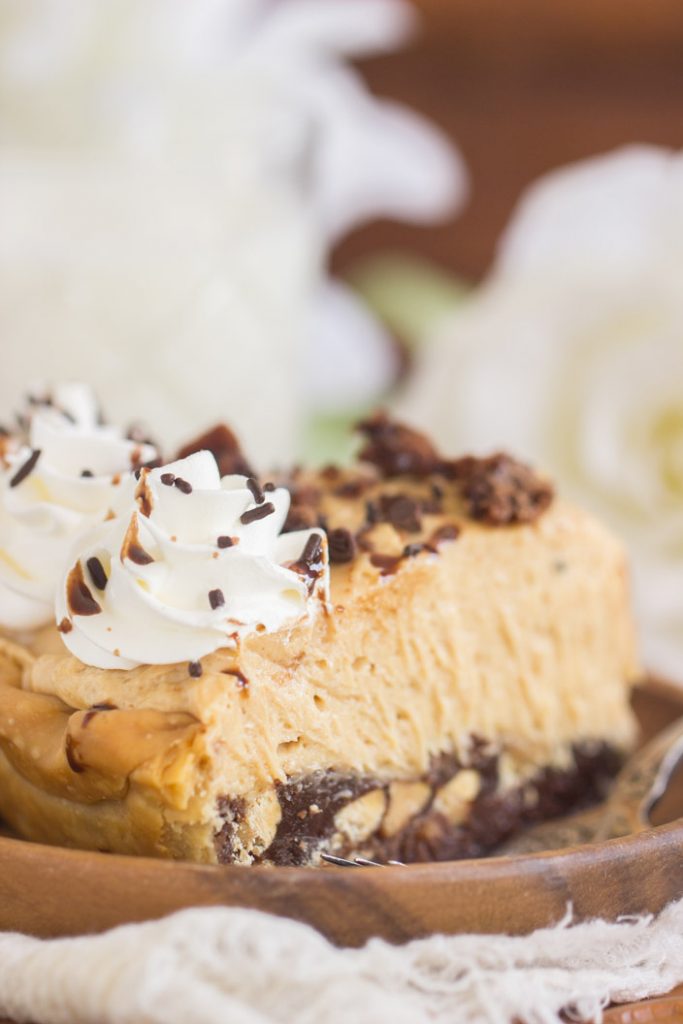 Oh, and this peanut butter cookie-loaded Nutter Butter Peanut Butter Pie version has really taken off lately. Quite sensational, all of them. 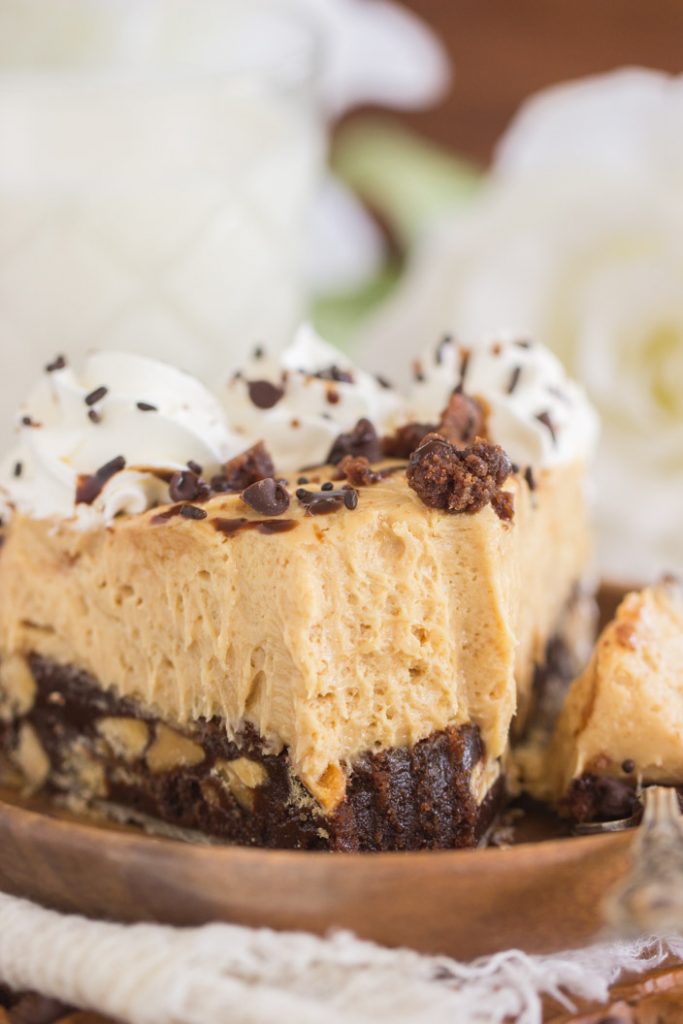 So… what’s on your baking to-do list the next couple weeks before it’s officially fall?? 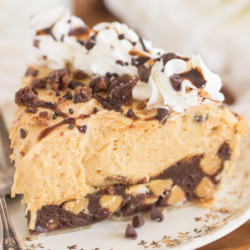 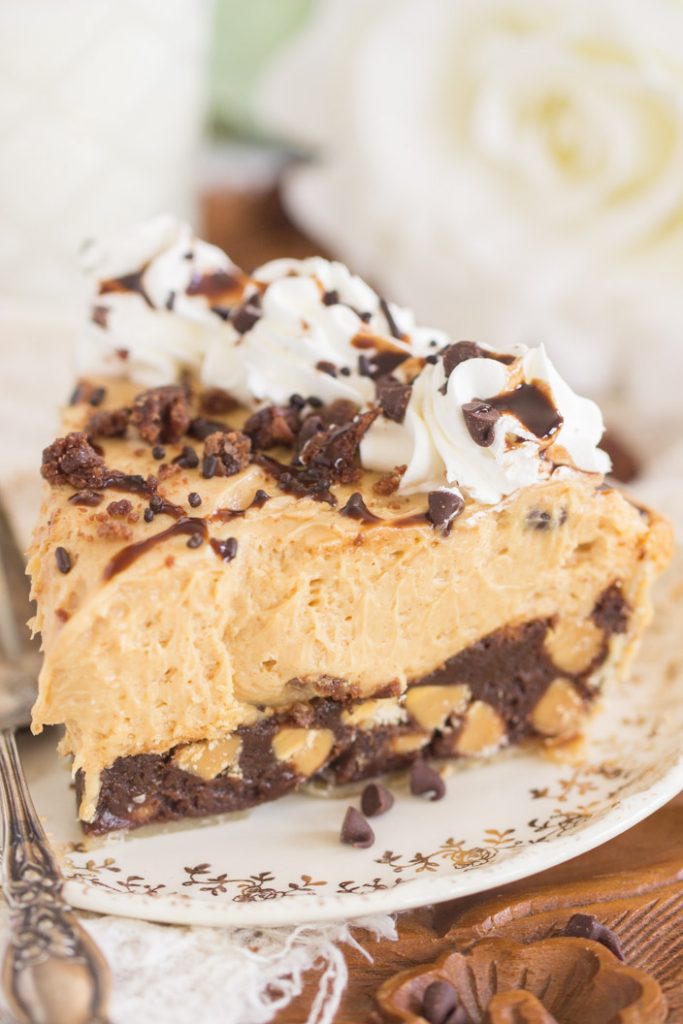