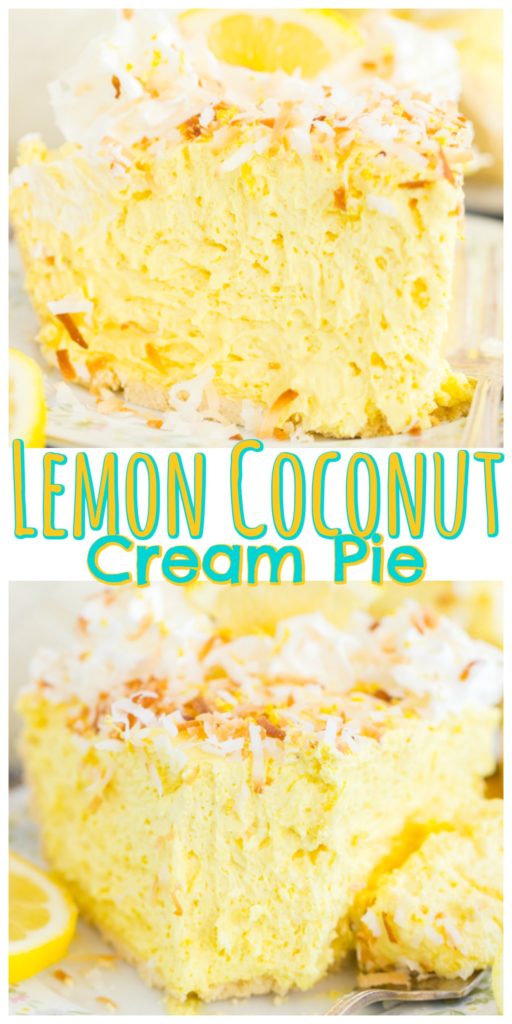 I’m doing a flurry of no bake pies this week, I’ve decided. It seems like a good time to provide simple, no fuss, oven-free, light, refreshing dessert recipes, and what meets those criteria better than no bake pies? 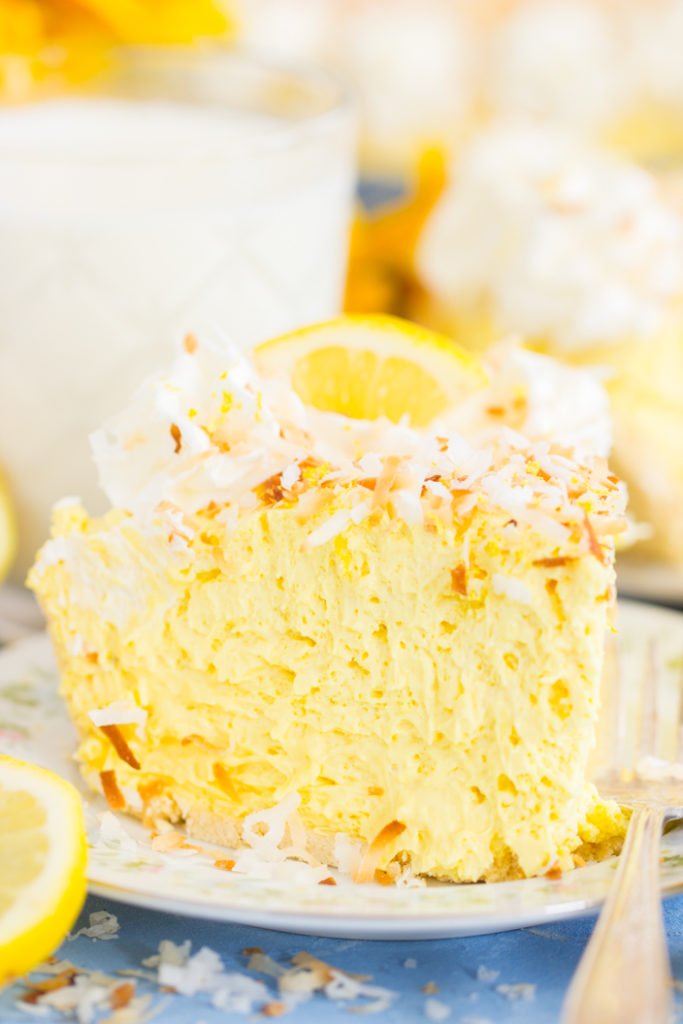 Quick & easy pie recipes are a summer staple. Fourth of July celebrations will look quite a bit different this year, but dessert doesn’t need to. We are likely staying safe at home, just us, but you better believe there will be pie.

Today’s Coconut Lemon Cream Pie is another pudding pie recipe, like the recent Pistachio Cream Pie and Amaretto Almond Cream Pie recipes. And many before. 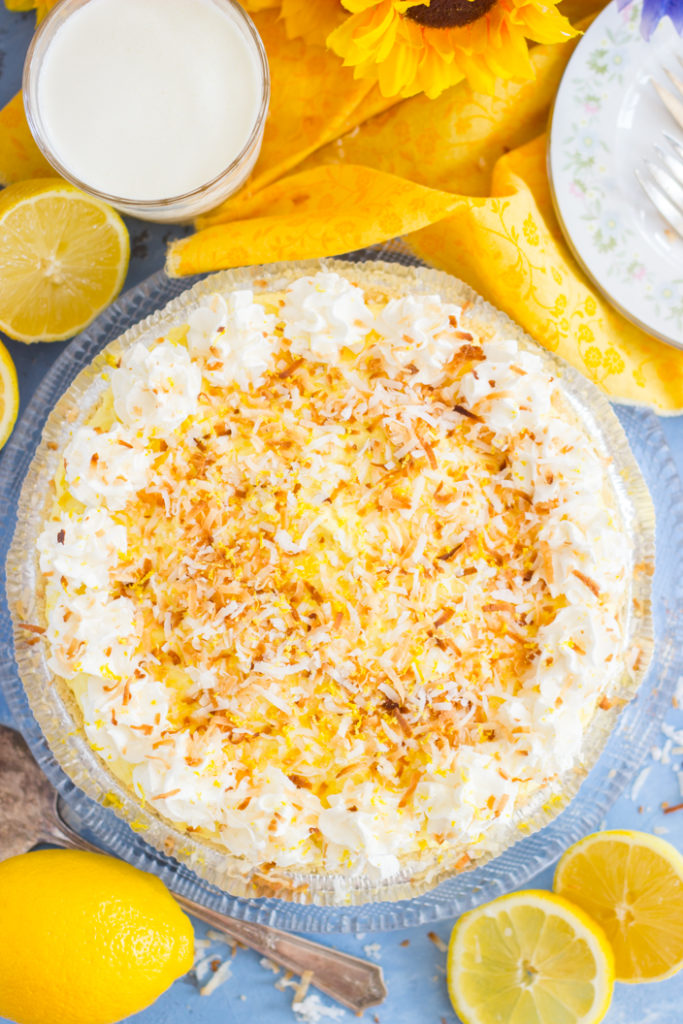 All of those are derived from this No Bake Coconut Cream Pie…. the popularity of that pie inspired a slew of others, and its versatility also contributed. You can really get creative with the bones of that recipe.
I’ve created a number of variations myself, and I’ve included tips below for how you can also make easy swaps and substitutions to invent new versions and flavor combos! 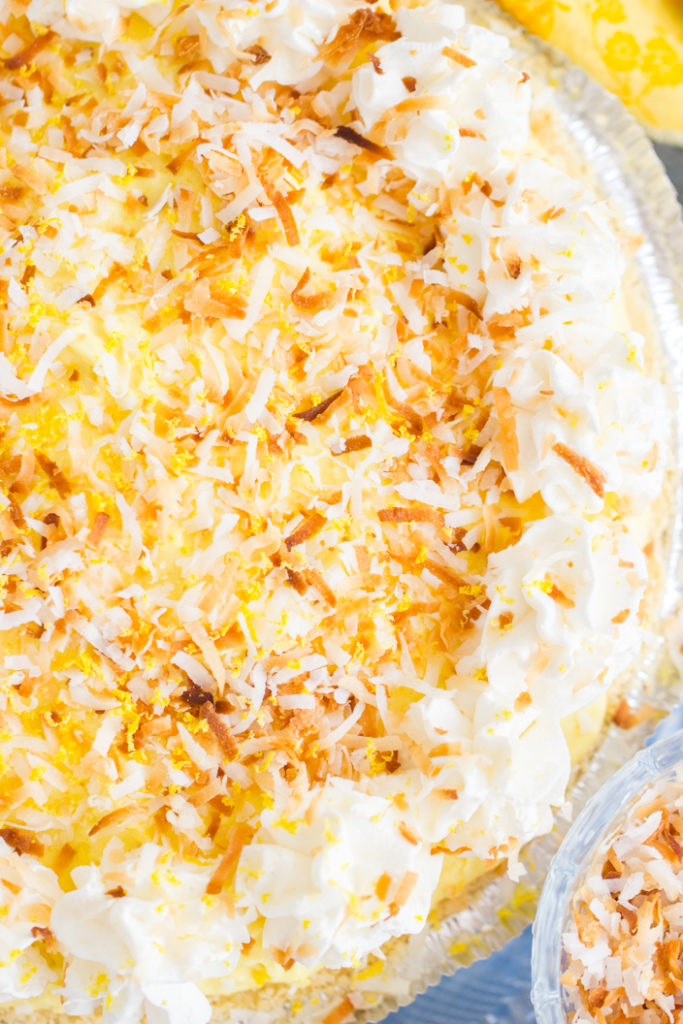 I love pudding pies. I guess they’re the pie equivalent of using a cake mix. Cheating and short-cuts are involved. This pie is semi-homemade, including a store-bought crust, Cool Whip, instant pudding mix, etc. Just because it’s a pudding pie and a semi-homemade recipe though, it doesn’t sacrifice on deliciousness! 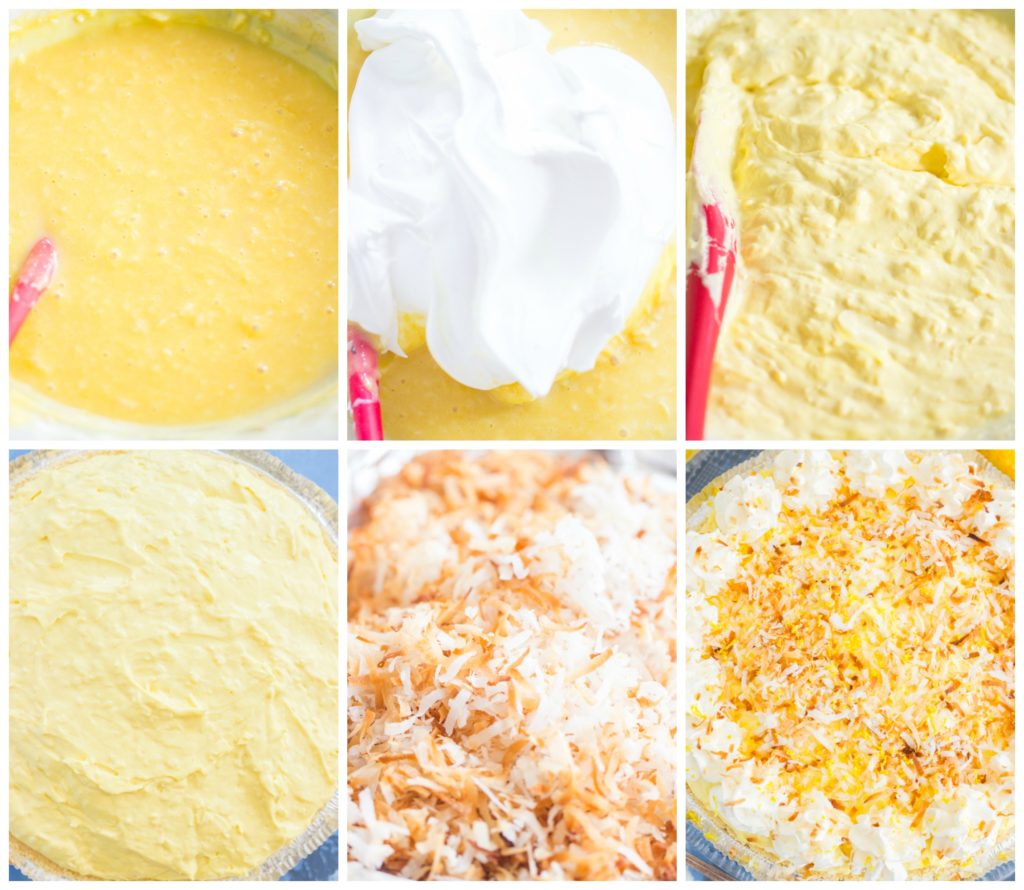 This No Bake Coconut Lemon Cream Pie is similar to many others in that it is light, mousse-y, exceedingly creamy, and lush. It’s suitable for a refreshing, summer dessert, but still rich and satisfying. I love that it’s not a heavy dessert, but still ultra-satiating in its richness. 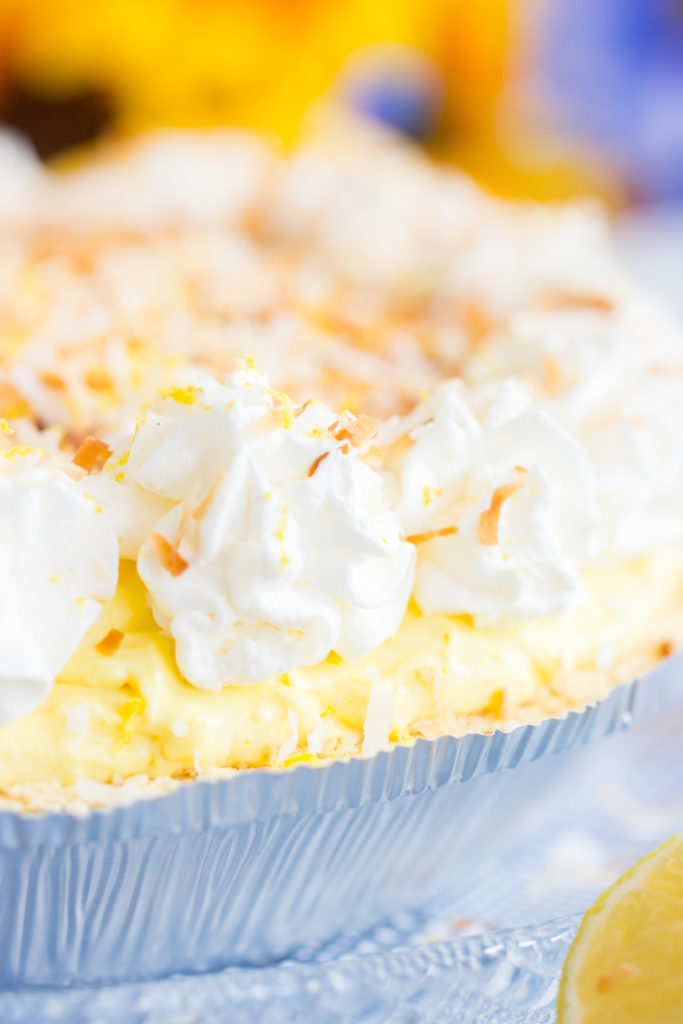 Also, as you can see, it’s very substantial! The crust is packed to the brim. Mile-high pies are always where it’s at for me. The taller, the better.

Chock-full of lemon and coconut — a base of lemon pudding, amplified with the addition of fresh lemon zest. Between those two ingredients, the lemon flavor is robust and authentic. Coconut extract and a HEAP of shredded coconut, both in the pie and on the pie, carry the coconutty side of the equation. 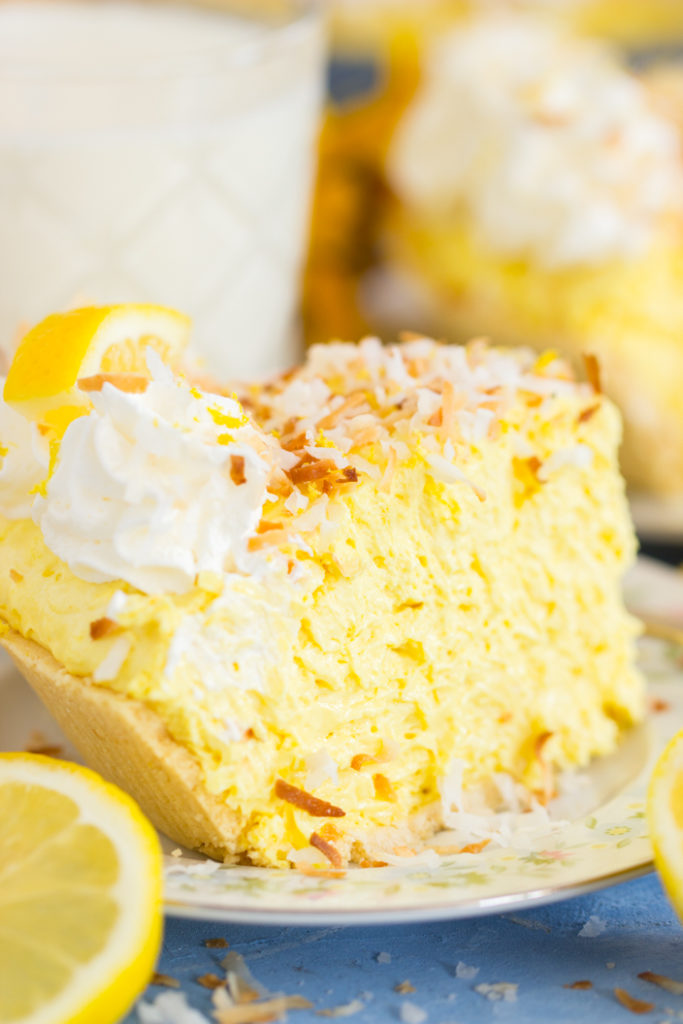 Bonus points: this No Bake Coconut Lemon Cream Pie preps in 15-20 minutes, doesn’t require an oven, and has a rather short, easy-to-find ingredient list. 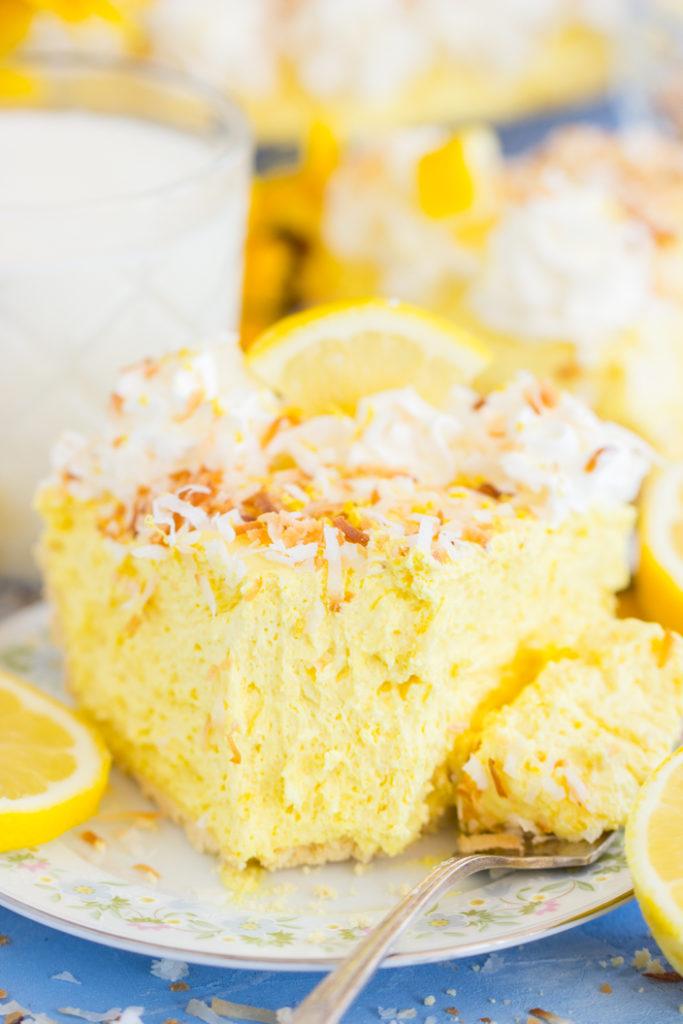 Want to elevate this recipe a notch or two? Or need to make substitutions?
My No Bake Coconut Lemon Cream Pie tips and variations:

I have a bunch of easy no bake pies and cheesecakes at this point, so here’s some other ideas: 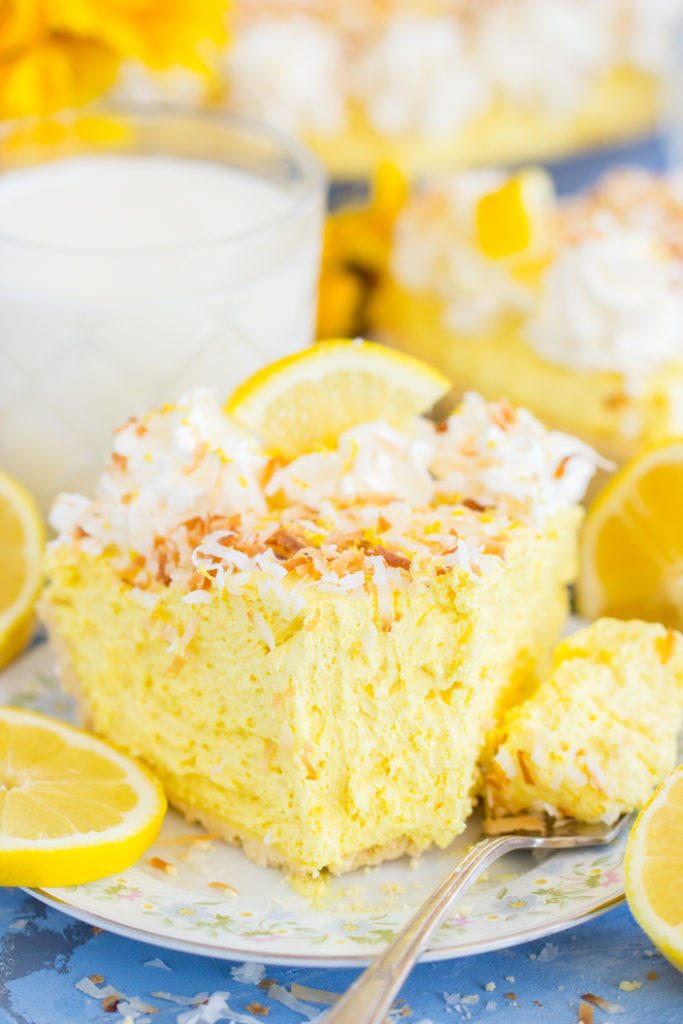 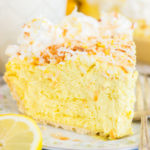 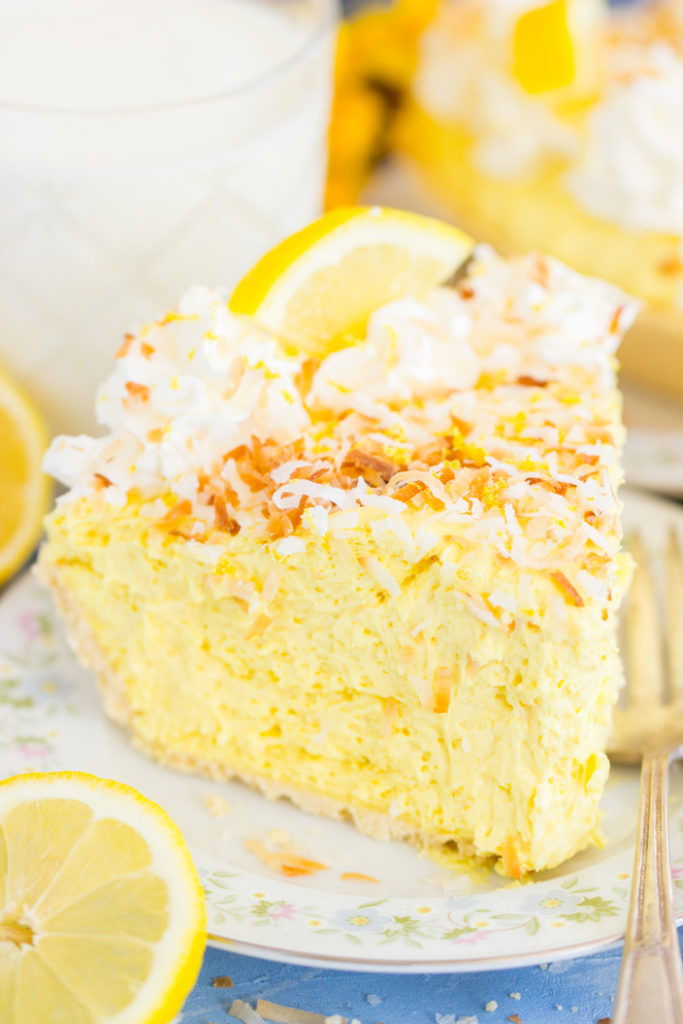