Snickerdoodle Bars are for lovers of sugar & spice, and everything nice! These Snickerdoodle Blondies start with a tried-and-true blondie recipe — rich, chewy, made with brown sugar for depth — then crammed with both white chocolate and cinnamon chips, and swirled with a heap of cinnamon-sugar! 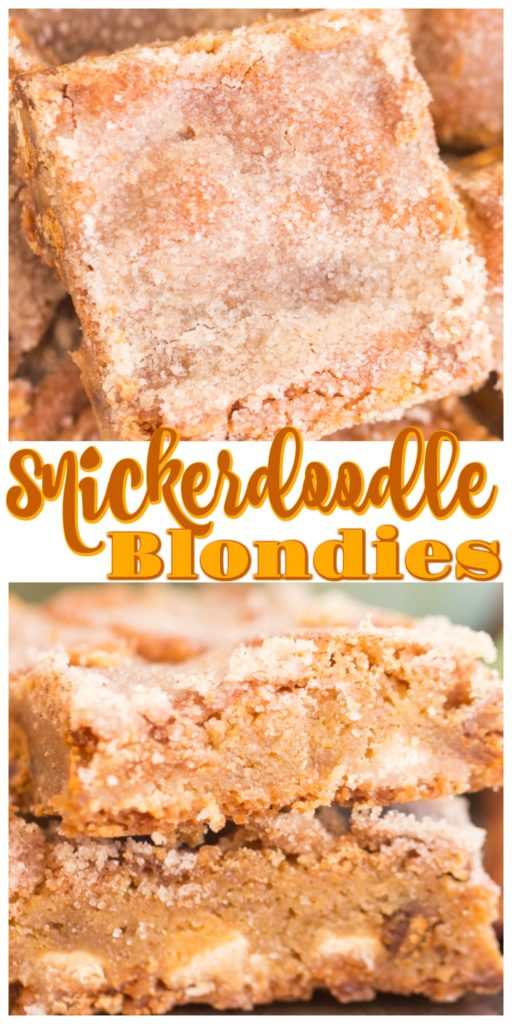 These Snickerdoodle Bars use a longtime favorite recipe of mine as a base, and I just substituted the heck out of it to arrive at these cinnamon-sugar-laden blondies. 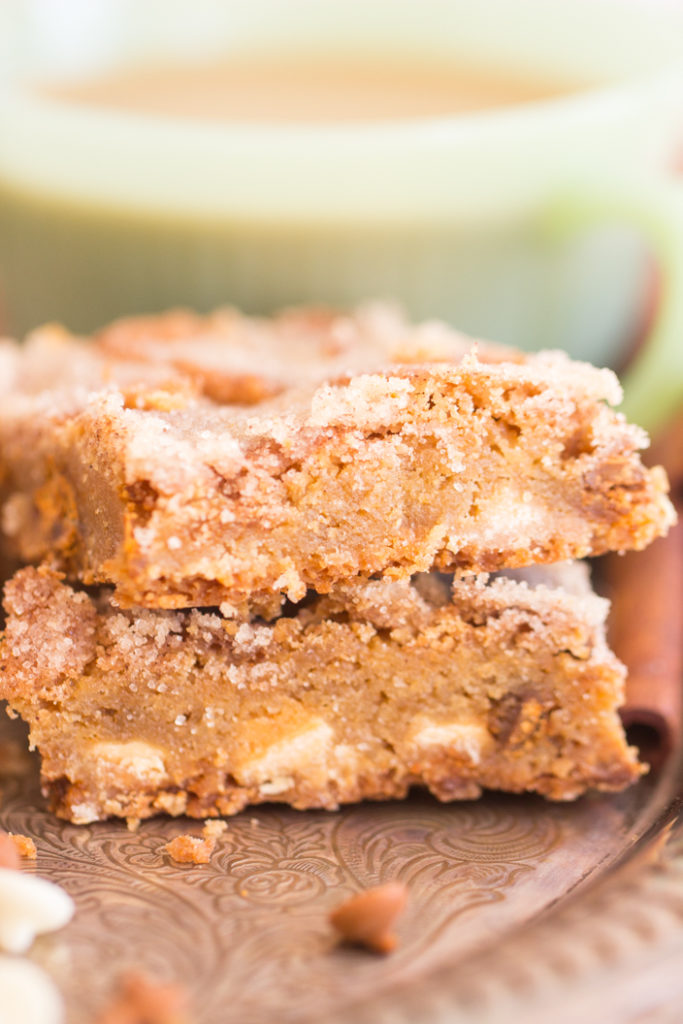 As is typical of my baking style, I recycle my ‘recipe box’ staples and old-faithfuls into something (hopefully) fresh and new. I’m sure you’ve noticed this pattern! 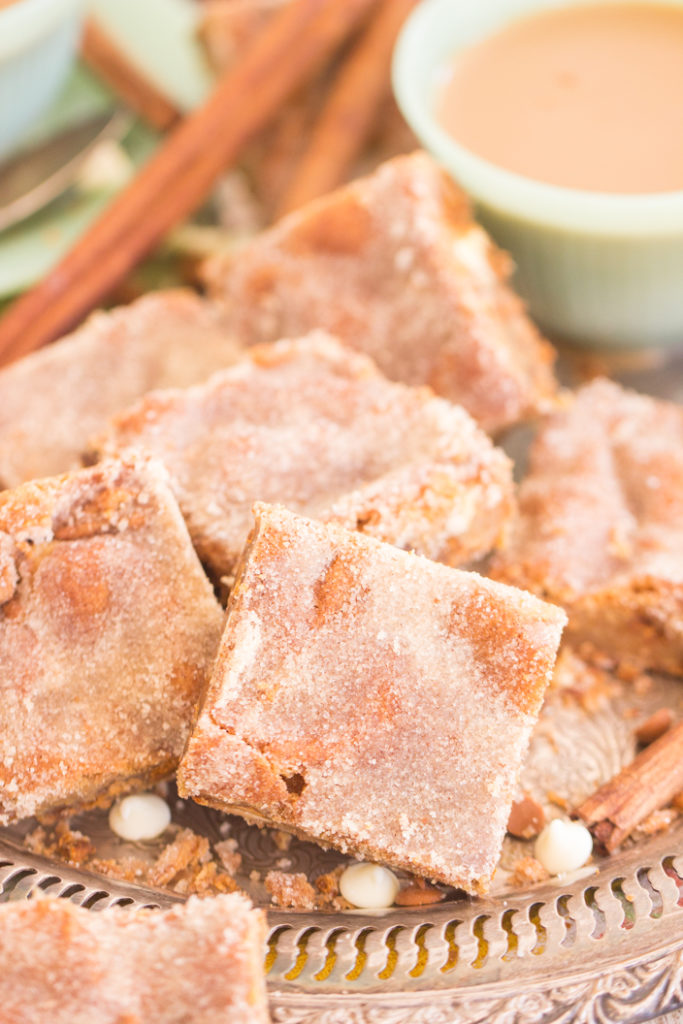 I think that these Snickerdoodle Blondies don’t look alluring at first glance because they’re yet another example of ugly food (see Pumpkin Zucchini Cookies and Pumpkin Zucchini Muffins… oof) and have a decidedly understated look, however, they pack a punch when it comes to taste. I reuse this blondie base over and over because it produces a very rich, buttery, and super chewy bar. 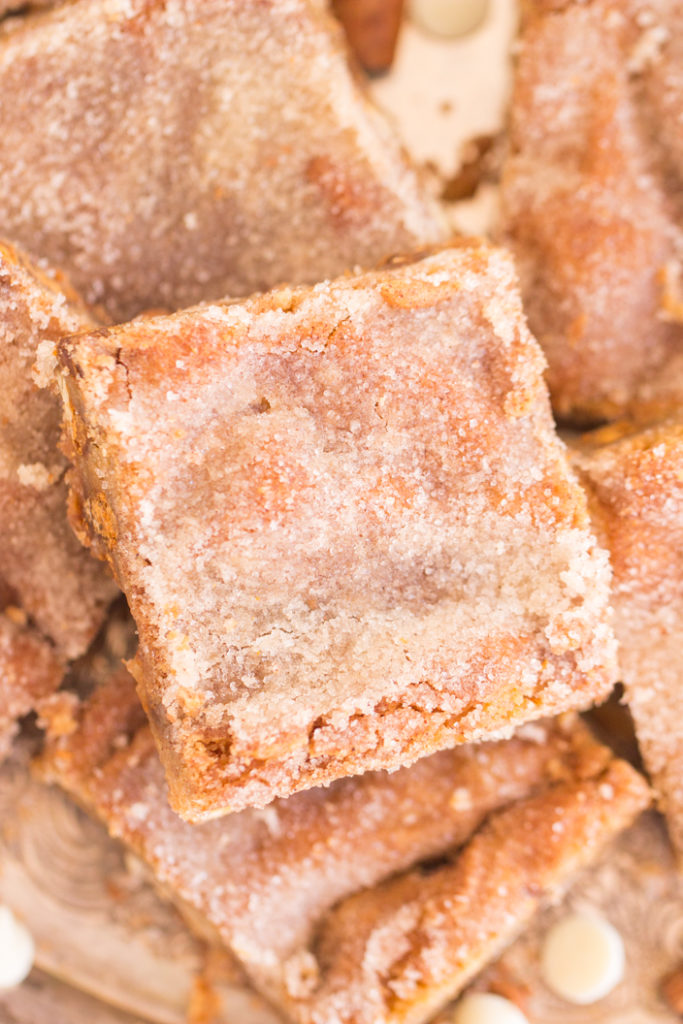 The dough boasts a few special qualities that result in the rich, chewy goodness: first of all, it’s made with a lot of butter and brown sugar. In that way, the dough is a bit like chocolate chip cookie dough, but there’s less edges here and more “middle” because they are bars. Having extra cookie middle is always a good thing. 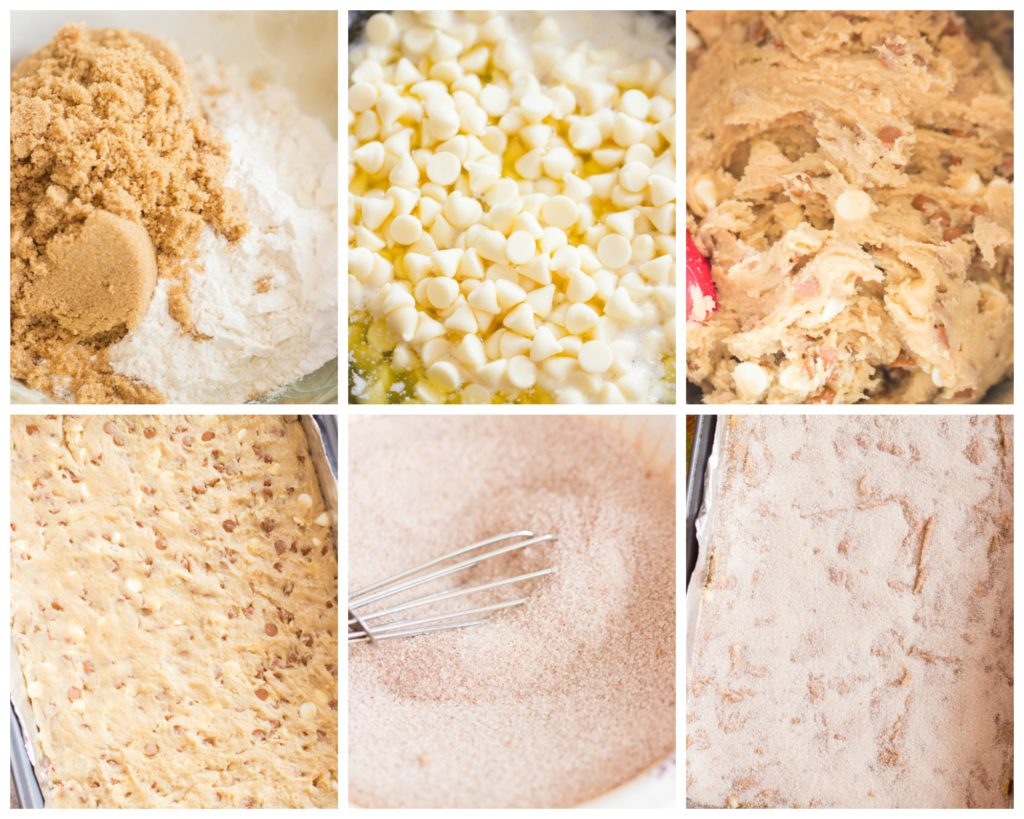 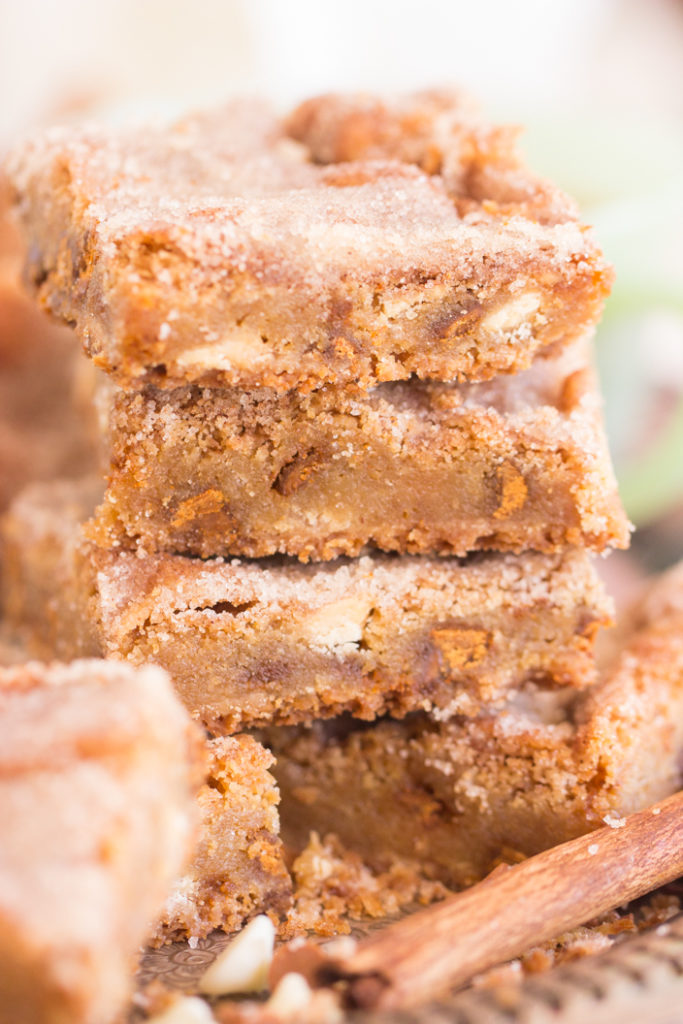 For these Snickerdoodle Blondies, I threw in a slew of cinnamon chips — I actually quite like those and don’t find them to be too inauthentic. Then these bars are topped with thick swirls of cinnamon-sugar.

Not gonna lie, these Snickerdoodle Bars are for a true sweet-tooth. They’ll give you a nice sugar rush. 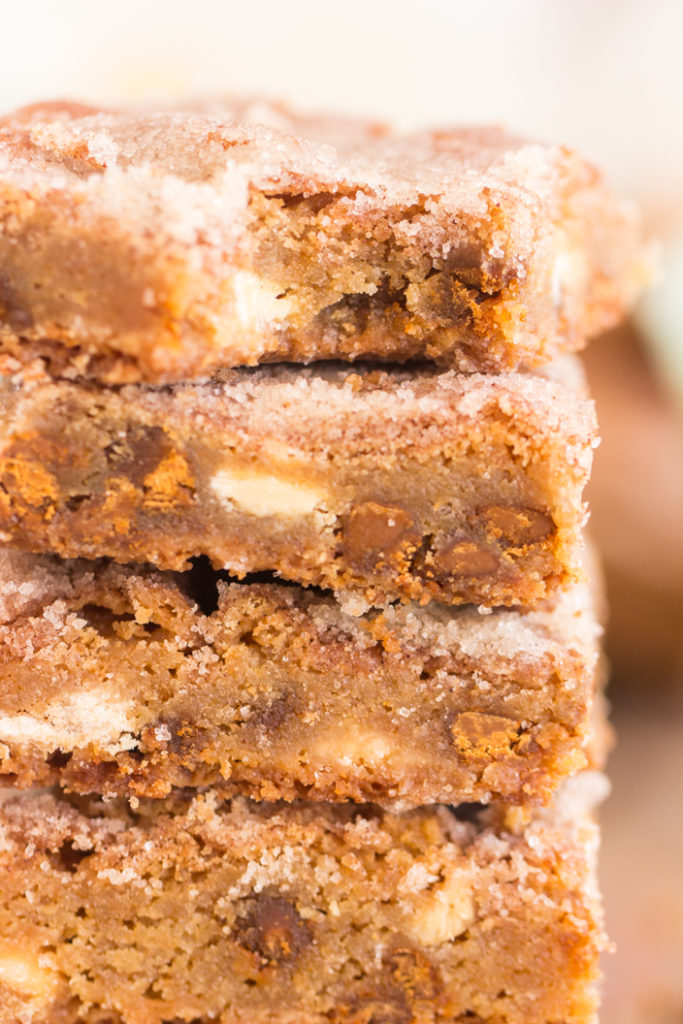 While they don’t bake up to be the prettiest things in all the land, they’re delightfully sweet and spicy, and will surely get your tastebuds in the fall spirit. 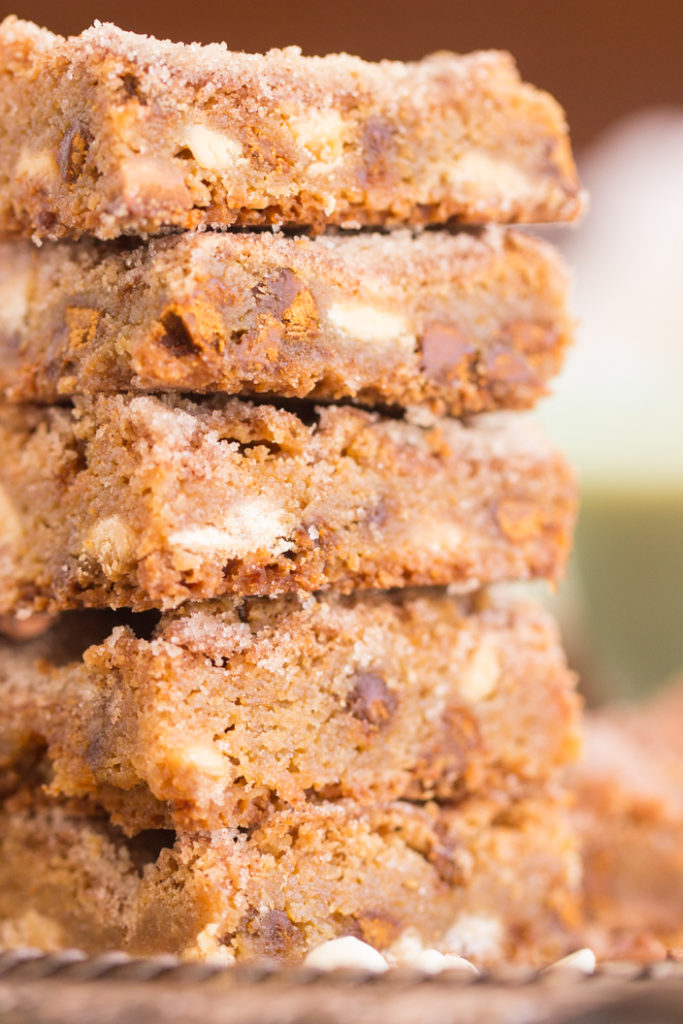 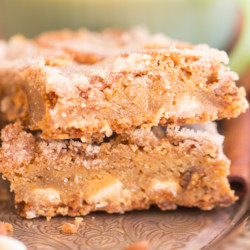 Sarah
Snickerdoodle Bars are for lovers of sugar & spice, and everything nice! These Snickerdoodle Blondies start with a tried-and-true blondie recipe -- rich, chewy, with brown sugar for depth -- then jammed with both white chocolate and cinnamon chips, and swirled with a heap of cinnamon-sugar!
5 from 3 votes
Print Recipe Pin Recipe
Prep Time 20 mins
Cook Time 25 mins
Total Time 45 mins
Course Bars
Servings 24 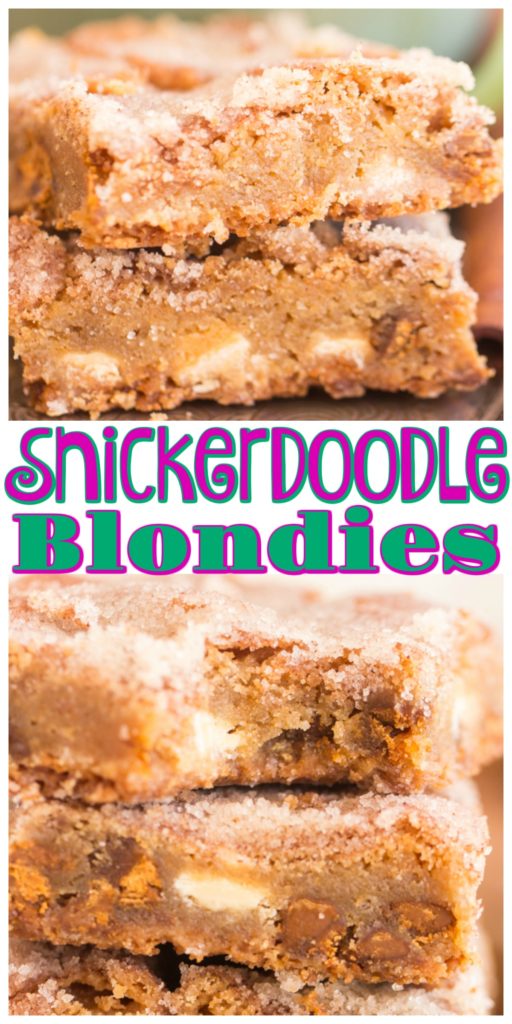